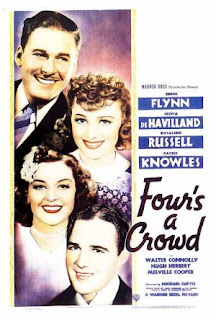 Four's a Crowd was quite a departure for Errol Flynn. By 1938 Flynn had established himself as cinema's preeminent swashbuckling star, with films like Captain Blood, The Charge of the Light Brigade, and the just-completed technicolor epic The Adventures of Robin Hood to his credit. In an attempt to avoid typecasting, Flynn desired to appear in other types of films - and Warner Bros., eager to keep one of their top stars happy, obliged with the fluffy comedy Four's a Crowd. A perfect, glittering example of the 1930s screwball comedy Four's a Crowd is not, but thanks to the chemistry of its stars and sharp direction by Michael Curtiz, Crowd provides several laugh-out-loud sequences and is an effective showcase for Flynn's surprising affinity for comedy.
Now let's see if I can get this story straight. *wink* In a dry-run for her later appearance in His Girl Friday, Rosalind Russell plays fast-talking reporter Jean Christy, who discovers that the owner of the newspaper where she works, Pat Buckley (Patric Knowles - Flynn's co-star in Robin Hood, where he played Will Scarlett), is about to shut down the paper. When he torpedoes her suggestion to re-hire the paper's former managing editor Bob Lansford (Flynn), Jean takes matters into her own hands and approaches Lansford herself. Lansford is a fast-talking public relations wizard who now makes a living out of transforming the public image of rich tycoons into something more palatable (essentially buys them good reputations through big donations). Bob isn't interested in the paper, until he learns that Pat is dating the Lorri Dillingwell (Olivia de Havilland), the granddaughter of a notorious business tycoon that he's desperate to gain as a PR client.
Basically, everyone's in love with everyone else, and the romantic entanglements are way to confusing to make sense of in a blog post. It's better to just watch the craziness unfold on-screen. The Flynn-de Havilland-Knowles-Russell love quadrangle is a bit of a mess if you stop and think about it for too long. The best reason to watch this movie is the chance to see Flynn do straight comedy, and do it well. Admittedly I have a big Errol Flynn bias (I've adored him since I was a kid). But honestly, if you're only familiar with Flynn the swashbuckler, you might be surprised by how well he acquits himself in Four's a Crowd. He more than holds his own as the sauve, fast-talking Langford, his performance comparable to the likes of "screwball" acting staples Cary Grant or William Powell.
Flynn is hilarious, effortlessly flowing between stuck-on-himself PR rep, ardent lover, and slapstick physical comedy. The lengths his character, Langford, will go to in order to secure Dillingwell as a client know no bounds, including - waitforit - rigging a toy train race by greasing the tracks with stolen butter. The shenanigans in this movie are hard core people, positively cutthroat! *wink* The object of Langford's professional aspirations is played by character actor Walter Connolly, a character actor from the 1930s best known for playing borderline hysterical, apoplectic, highly exasperated characters (see It Happened One Night, Libeled Lady, and Too Hot to Handle). Watching Flynn flee from the hounds Dillingwell set after his character on multiple occasions will leave you in stitches, moreso because the usually debonair Flynn seems to really relish the absurdity of the moment. 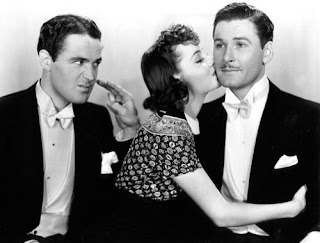 Flynn and Olivia de Havilland made a total of eight films together, and there's a certain "spark" that lights the screen when they appear together in Four's a Crowd, testimony to the real-life (but unrealized) chemistry between the two of them that made theirs such a potent on-screen partnership. One of the film's funniest scenes takes place when Langford takes refuge in Lorri's bedroom, and she frantically tries to hide him from the housekeeper, security guards, and finally her grandfather, all while he's being "attacked" by her lap dog. The scene is pure slapstick gold, and Flynn and de Havilland seem to throw themselves into the action with unabashed glee. It's worth noting that the character of Lorri was a departure from the norm for Olivia de Havilland - known for playing "sweet," ladylike heroines, Lorri is a total self-absorbed twit. Personally the change works for me - it's interesting to see de Havilland explore this side of her acting range.
Watching Flynn's hilarious three-way telephone conversation with his leading ladies - frantically striving to keep the women unaware that he's been wooing them at the same time - makes me wonder what gems he could've produced if he'd been given the opportunity to play more comedic roles. The frenetic, funny pace of the telephone conversation just screams Cary Grant, but to his credit Flynn owns the moment. Good ol' Errol could've given Grant a run for his money if given the opportunity. *wink*
While lacking the sparkle and polish of screwball comedy classics like My Man Godfrey or Bringing Up Baby, Four's a Crowd is a fairly enjoyable little film, enlivened by performances from some of classic Hollywood's brightest stars. And if you're a fan of Errol Flynn, it's worth watching on the basis of his performance alone as the renowned prankster really seems relish the rare opportunity to indulge in pure, unadulterated slapstick on-screen.
Posted by Unknown at 1:18 PM

Okay, I can just picture the "party line" sequence as it were....makes me think of "Pillow Talk" and Rock Hudson trying to keep the girls' names straight =P

Personally, I prefer Errol Flynn when he departed from his swashbuckling roles....and I just saw a cute one a few weeks ago. Have you ever seen "Never Say Goodbye" with Flynn and Eleanor Parker? It is super cute. Granted, full of the predictability, but hey, who doesn't love that?!

So, what would be your favorite Errole Flynn flick? And how about Olivia de Havilland while you're at it ;-)

@Ella - Oh, good call on the 'Pillow Talk' comparison - the party line sequence is very similar, only without the '60s split screens. :)

I LOVE that film, 'Never Say Goodbye'!!! I think it's just adorable!!! (And I just love that someone besides ME is aware of it, I thought I was the only one for ages, LOL!). I will definitely post about it at some point.

Let's see...favorite Errol Flynn movie...gosh that's hard. As much as I love some ofo his non-swashbuckling roles, all-time favorite is probably 'Captain Blood' or 'The Adventures of Robin Hood.' Or 'The Sea Hawk' (see, I told you I couldn't pick just one!). ;) Olivia de Havilland - I love her opposite Flynn, but if we're talking about non-Flynn films, I'd have to go with 'The Heiress' or 'My Cousin Rachel.' You? :)

Let me see, I really liked Flynn in "Never Say Goodbye"--partly because I didn't have high expectations for the movie going in....and yet I was really surprised by how much I did enjoy it

Olivia de Havilland--if you don't count "GWTW", I really like her in "The Heiress". She does a really good job =)

@Ella - Flynn just KILLS me in 'Never' because he's so flippin' adorable in it. Excuse me while I swoon... ;)

GWTW is an admitted classic in the de Havilland filmography - but I didn't even really consider it because I'm not that big of a fan of the film. (Shocking, right??) ;) 'Heiress' it is, she is just amazing in it, I agree! :)