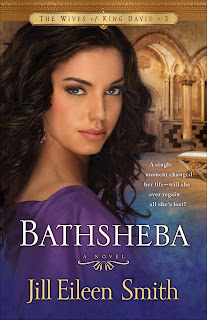 Can love triumph over treachery?

Bathsheba is a woman who longs for love. With her husband away fighting the king's wars, she battles encroaching loneliness - which makes it all too easy to succumb to the advances of King David. Will one night of unbridled passion destroy everything she holds dear? Can she find forgiveness at the feet of the Almighty? Or has her sin separated her from God forever?

With a historian's sharp eye for detail and a novelist's creative spirit, Jill Eileen Smith brings to life the passionate and emotional story of David's most famous - and infamous - wife. You will never read the story of David and Bathsheba the same way again.

For the concluding volume in The Wives of King David trilogy, author Jill Eileen Smith breathes life into the story of David’s most infamous wife, Bathsheba – a woman who came into his life through adultery, who in spite of her scandal-ridden past would come to have the honor of being named in the genealogy of Jesus Christ. Like the previous two wives Smith brought to life (Michal and Abigail), Bathsheba’s past is again strikingly different from theirs, and her life intersects with a David who is the established, beloved – and prideful? – King of Israel. The Bible gives perhaps even less insight into Bathsheba’s character and personality than it does Michal and Abigail, leaving Smith a veritable blank canvas with which to recreate the events leading up to, and the consequences of, one of history’s most famous affairs. Using the Biblical text as her framework, Smith weaves an engrossing tale of the events and struggles that would lead David, a man after God’s own heart, mighty and favored beyond imagination, to claim another man’s wife as his own. And she brings to colorful life Bathsheba, the woman whose beauty would threaten the security of a kingdom, and who’s one night of forbidden passion with a king would bring about devastating repercussions, redeemable only by the grace of a merciful God.

For the first third of this novel, Smith introduces readers to Bathsheba’s life prior to her fateful night with David. A daughter of privilege, born into a family with close ties to David’s royal house, she was given in marriage to Uriah, a Hittite who adopted the faith of Israel and gained honor and position as one of the Thirty, David’s select group of warriors. At times I really struggled to connect with Bathsheba and Uriah – she never seemed satisfied, always questioning and doubting her husband’s love since wars kept him away from her months at a time, while he was so pragmatic and dedicated to the letter of the law that he had no sympathy for or inkling of how to handle Bathsheba’s emotional volatility. However Uriah, perhaps one of the most tragically wronged individuals in the Bible, is fully realized as an honorable, loyal innocent caught up in events not of his own making or desire. Though it is never specified in the Bible that Bathsheba and David met prior to the night he sent for her in 2 Samuel 11, Smith conjectures – reasonably, I think – that due to Bathsheba’s family heritage and her husband’s position in David’s royal guard, that it’s possible they met earlier. Such a meeting plants the seeds of curiosity and desire in each of them, sparks that flame into a full-blown obsession when David witnesses Bathsheba’s ritual purification bath from the palace rooftop. Smith does a superb job of creating emotional tension between David and Bathsheba, and the fallout from their passion and attempts to hide their sin is positively wrenching to witness.


One of the aspects I’ve really appreciated about this trilogy is Smith’s ability to bring to life David’s most famous wives, and make them living and breathing, relatable, fallible humans. The scripture seems to imply that Bathsheba was a willing partner in adultery by the omission of any words to the contrary – and while Smith’s retelling doesn’t shy away from Bathsheba’s possible complicity, she also explores her fall with a perspective I’d not imagined before. The social and cultural structure that Bathsheba operated within – that made her wholly subject to the dictates of the men in her life – make it easier to understand how her society would have conditioned her to obey men, whether father, husband, or king, without question. The consequences of David’s callous selfishness in claiming Bathsheba when he had no right is heartbreaking to watch unfold. David and Bathsheba’s shared guilt provides Smith with the springboard for crafting a powerful illustration of God’s redemptive grace in the face of unfathomable sorrow. Bathsheba is a story of second chances, and God’s ability to bring beauty from the ashes of seemingly irredeemable mistakes, when a broken soul seeks and accepts forgiveness.
Posted by Unknown at 5:54 PM

Sounds really good! And the first two book do, too, from reading your other reviews. I think I saw one of these once at the bargain bookstore-I need to look for it next time I'm there. :)

I like what you said (I think in one of the previous reviews) about how books like these remind us that the people in the Bible were real people who lived real lives. I like books like that- "Havah" was another one that was like that for me.

@Kristin - Oh girl, these books are SO good! I hope you can track down copies of them all! Smith breathes life into these women in a way that makes the scant mentions of them in the Bible even more impactful, if that makes sense. LOVE it when that happens. :)