Review: The Eagle by Rosemary Sutcliff 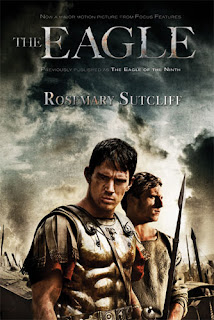 Great review! I'm so glad you liked it, Ruth. Sutcliffe has been a favorite of mine for a long time, though it must be ten years since I read any of her work. I haven't yet read all her books, but every one I have read has been very good, to great. I saw the movie too. It was much better than I was expecting, all in all.

You've inspired me to read more of Sutcliffe. I have another Roman Britain book of hers here I hope I have time to read before the library demands it back. The Capricorn Bracelet.

I'm also immersed in Deeanne Gist's Maid to Match, and liking it better than any of her books I've read so far.

And I just got my copy of Higg's Mine is the Night.

@Lori - Thank you! I cannot believe I had never even heard of Sutcliff until news broke about the film version of The Eagle. Her novels are the type of thing I just DEVOURED as a teenager! I'm definitely interested in reading more of her Roman Britain books!

Sounds like you're in for some good reading right now, too. :)

RUTH! I can’t even put into words how amazing your review is!! There are few reviews I enjoy the way I enjoy yours and I am always impressed, and greatly appreciate, by how well written they are. Anyone can say they loved a book and they highly recommend it, but you back those statements up, making a potential reader VERY interested , if not convinced that they simply must read it! I hope to read this someday but am excited for the movie, since you said its faithful to the book AND Channing is quite a sight to behold ;)

I especially loved the last paragraph of your review when you were talking about how the way we "respond" to situations determining our life – I’m glad that message is coming through in the book and the way you described it is so profound. And, if I may say so, you dropped quite a few “money lines” in this review ;) Any author would be blessed to have a quote from you on their book! Thank you again for all the heart you put into your reviews (it inspires me to write better ones myself!) and thank you for letting me know you posted this :)

@Amanda - Thank you so much, my friend! Your words mean a lot! :) I really enjoyed this book and just couldn't stop writing about it. I do so hope you'll get to delve into the book soon, I would love to know your thoughts! A bit different from what we usually discuss *g*, but a worthwhile and fascinating change of pace, I think! :)

Sutcliff's Bronze Age Britain story, Warrior Scarlet, is one that stands out in my memory. How many Bronze Age books are out there, I wonder? Hers is the only one I've ever read.