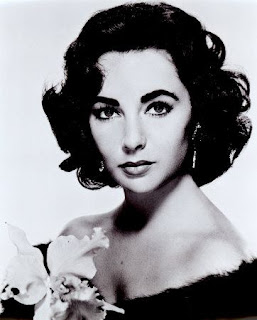 I was saddened to hear of Elizabeth Taylor's passing this morning. As a classic film addict I've enjoyed many of her films throughout the years. She was talented, gorgeous, classy, and relished living life to the fullest, through heartache, tragedy, and (many) marriages. I thought I'd take this opportunity to highlight a few of my favorite Liz Taylor films, in the hope that perhaps you'll be inspired to revisit a classic or discover a new favorite. 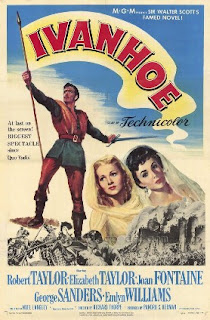 
Stand and pledge loyalty - or prepare to lie cold beneath your shields. Chivalrous knight Wilfrid of Ivanhoe is determined to restore Richard the Lionhearted to England's throne.
Gallantry and costumed pageantry combine in this crowd-pleasing nominee for 3 Academy Awards including Best Picture. Robert Taylor plays the title role and Elizabeth Taylor and Joan Fontaine also star in a rousing adaptation of Sir Walter Scott's novel. The film's jousting tournament is a galloping display of steed and stout-hearted men. Most spectacular of all is the siege of Torquilstone Castle, a wave-after-wave combat of arrows, fire, boulders, battering ram, and blade. To the battlements! (From the DVD, click to purchase.)

Growing up I went through a phase where I was absolutely obsessed with tales of knights and chivalry. This 1952 film was my first introduction to the tale of Ivanhoe, and one of the main reasons I developed a crush on Robert Taylor. The film holds up today as a wonderful example of technicolor spectacle from Hollywood's Golden Age, and Taylor gives a luminous, compelling performance as Rebecca. An absolute classic! Here's the film's trailer: 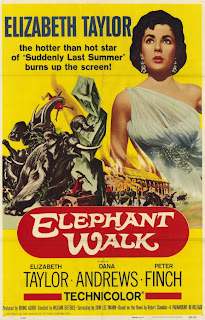 
Elizabeth Taylor, Peter Finch, and Dana Andrews star in this action-packed drama set in Ceylon. Taylor plays a newlywed who accompanies Finch to his sprawling tea plantation called Elephant Walk...and falls for overseer Andrews. But this love triangle is soon dwarfed by other events. A cholera epidemic breaks out, drought blights the land and herds of thirst-maddened elephants devastate the plantation in a thundering stampede.

This famed sequence is a triumph of moviemaking. The palatial "bungalow" is reduced to rubble as onrushing elephants pound across polished floors, rip walls from their foundations and knock over kerosene drums to ignite a terrifying inferno. You have to see it to believe it! (From the DVD, click to purchase.)

This is one of the first films I can remember watching on AMC after my parents got cable when I was nine or ten years old. The feeling I got when I first saw the elephant stampede is still, to this day, seared in my memory. It blew me away then, and I still love it now. This is a fantastic, passionate story of romance and survival against the most overwhelming force of all - nature unleashed. L-O-V-E it in all of its over-the-top, cheesy glory. :) 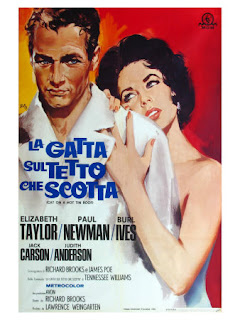 
"I'm not living with you," Maggie snaps at Brick. "We occupy the same cage, that's all." The raw emotions and crackling dialogue of Tennessee Williams' 1955 Pulitzer Prize play rumble like a thunderstorm in this film version, whose fiery performances and grown-up themes made it one of 1958's top box-office hits.

Paul Newman earned his first Oscar nomination as troubled ex-sports hero Brick. In a performance that marked a transition to richer adult roles, Elizabeth Taylor snagged her second. Her Maggie the Cat is a vivid portrait of passionate loyalty. Nominated for six Academy Awards including Best Picture and also starring Burl Ives (repeating his Broadway triumph as mendacity-loathing Big Daddy), Judith Anderson and Jack Carson, Cat on a Hot Tin Roof sizzles. (From the DVD, click to purchase.)

I ADORE this movie. If you're looking for a scandal-ridden, juicy family drama (I confess I have a weakness for such!), look no further than Cat. The performances are electrifying, and Newman and Taylor's on-screen chemistry sizzles. Wildly entertaining! (And isn't that Italian version of the poster fab?!) Here's the movie trailer: 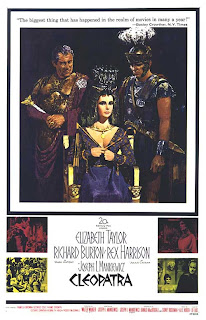 Elizabeth Taylor, Richard Burton and Rex Harrison star in this sweeping tale of power and betrayal - the legendary story of the Queen of the Nile and her conquest of Julius Caesar and Marc Anthony. Here is the truly unforgettable portrayal of the beguiling beauty who seduced two of Rome's greatest soldiers and changed the course of history. Breathtaking in scope and grandeur, the picture won Oscars for cinematography, art direction, costumes, sets and special effects. In the tradition of epic romantic adventures like Braveheart and Titanic comes the greatest spectacle of all...CLEOPATRA. (From the DVD, click to purchase.)

Cleopatra is a film that has always fascinated me. I love the actual history and the sheer spectacle of the movie, and the film's story off-screen is as fascinating as the history that plays out over a sprawling run-time that exceeds four hours. And for as long as that is, this movie never drags and is as riveting an experience as the first time I can remember watching it years ago. Elizabeth Taylor OWNS the screen in this movie. Sure, it's over-the-top, but I love it. You can read an article about the film's tumultuous history here - they sure don't make 'em like this anymore. Here's a crazy-long film trailer: 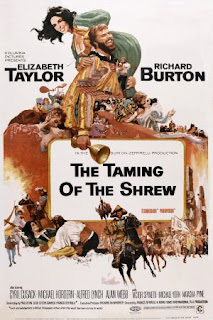 Elizabeth Taylor and Richard Burton sparkle and amuse as Katharina and Petruchio in William Shakespeare's comic look at male chauvinism and women's lib in the 16th century. Petruchio, a poverty-stricken gentleman from Verona, journeys to Padua in search of a wealthy wife. There he encounters the fiery Katharina, a self-willed shrew who leads Petruchio on a merry chase before he successfully circumvents her attempts to avoid marriage. Their honeymoon becomes a humorous battle of wit and insult with Kate as determined to maintain her independence as Petruchio is to "tame" her. When the embattled couple returns to Padua, Kate helps Petruchio win a wager that his is the most obedient of wives. But in reality, the shrewish Kate has found a more effective way to dominate her mate. (From the DVD, click to purchase.)

I mentioned this movie a couple of weeks ago when I blogged about the Shakespeare Retold version of Shrew. This movie is, in my estimation, one of the best film versions of a Shakespeare play ever made (yes, I'm equating it with my beloved Kenneth Branagh films! *wink*). It's wildly entertaining from start to finish, and Taylor and Burton's chemistry just can't be equaled - I think they were a perfect pair to play Shakespeare's feuding lovers. Here's the trailer:

Rest in peace, Dame Elizabeth, and thank you for the fabulous films.
Posted by Unknown at 5:12 PM

And she was the uncredited Helen Burns in Jane Eyre '44 as well. :) Sad to hear of her passing. Liz Taylor was/is a legend!

@Traxy - Yep (why am I not surprised you'd be the one to bring up that role? LOL). She was so striking, even in that brief scene!

I was so sad to read about Taylor's passing. I hope it inspires more people to check out some of her films. I've only seen 3 of the ones you mentioned but I'm hoping to watch a couple more in the next weeks. So far, Cat on a Hot Tin Roof is probably my favorite of hers.

Have you seen A Place in the Sun? I love Montgomery Clift and Taylor in it.

Poor doll had been through so much in the last years of her life. I hope she's in peace now. Great post :)

I was sad to hear about it, too- it's a sad thought to me that nearly all of those who were part of the golden age of Hollywood are gone now.

I hate to say this, but I've never seen any of those films starring her! I've only seen her in Jane Eyre, Little Women, Father of the Bride, and maybe one more that I can't think of.

@Bookworm1858 - Me too - that's why I wanted to share some of my favorites. Glad to know another fan of Cat. :) I don't know that I've ever watched A Place in the Sun all the way through - I seem to remember catching bits and pieces of it at various times that its aired on TCM, but never made time for the whole film. I love me some Montgomery Clift, so that will have to change. :)

@Kristin - I so agree...we get closer and closer to the end of an era that can't be equaled...and that makes me so sad. Thankful for the DVDs that keep the Golden Age of Hollywood alive in my living room! :)

And yay for maybe introducing you to some new Taylor films?! :) I have seen the three you mention and really do enjoy them...but when I was putting together this post after perusing her IMDB listing, these are the five that rose to the top. :)

I forgot "Giant"! It just hit me the other day, and I thought about this post. :) I've also seen her in "Giant." I can't believe I forgot that huge movie with a grey-haired James Dean. :)

@Kristin - Oohhh, yeah, that's a good one. The grey-haired James Dean is odd though...the aging makeup left a lot to be desired. :)