A Heart Most Worthy by Siri Mitchell

This week, the
Christian Fiction Blog Alliance
is introducing
A Heart Most Worthy
Bethany House (March 1, 2011)
by
Siri Mitchell
ABOUT THE AUTHOR:

Her ninth novel, A Heart Most Worthy, follows prior Bethany House releases: A Constant Heart (October 2008), Love's Pursuit (June 2009), and She Walks in Beauty (Apr 2010). She Walks in Beauty won the inaugural INSPY Award for Historical Fiction in Dec 2010. Two of her novels, Chateau of Echoes and The Cubicle Next Door were Christy Award finalists. Love's Pursuit was a finalist for the ACFW Carol Award. 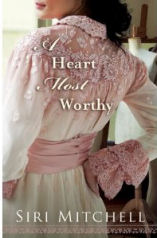 The elegance of Madame Forza's gown shop is a far cry from the downtrodden North End of Boston. Yet each day Julietta, Annamaria, and Luciana enter the world of the upper class, working on finery for the elite in society. The three beauties each long to break free of their obligations and embrace the American dream--and their chance for love. But the ways of the heart are difficult to discern at times.
Julietta is drawn to the swarthy, mysterious Angelo. Annamaria has a star-crossed encounter with the grocer's son, a man from the entirely wrong family. And through no intent of her own, Luciana catches the eye of Billy Quinn, the son of Madame Forza's most important client.

Their destinies intertwined, each harboring a secret from their families and each other, will they be found worthy of the love they seek?

If you would like to read the first chapter of A Heart Most Worthy, go HERE.
Posted by Unknown at 5:41 AM

I love this cover! I'm getting this from PBS so I'll probably be reading it next week or so! I'm excited LOL!

@Renee - Looking forward to your review! Siri's books get some of the most incredible covers, don't they?

I'm not sure if I'll be reviewing this since I have a lot on my plate already but if I do I'll post on Goodreads! :-)

@Renee - Well, I will definitely be looking for your thoughts on Goodreads! :)