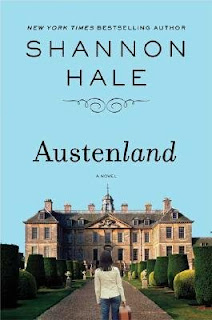 
For the woman with everything except a Mr. Darcy of her own,
An invitation to
AUSTENLAND
Pembrook Park, Kent, England. Enter our doors as a house guest come to stay three weeks, enjoying the country manners and hospitality – a tea visit, a dance or two, a turn in the park, an unexpected meeting with a certain gentleman, all culminating with a ball and perhaps something more…
Here, the Prince Regent still rules a carefree England. No scripts. No written endings. A holiday no one else can offer you.
Review:

Jane Hayes is just your average, thirty-something, single New Yorker except for one little thing...her obsession with Pride and Prejudice, particularly with Mr. Darcy (as portrayed by Colin Firth, of course!), is ruining her life. No living, breathing, real man can compare to Darcy, the epitome of Regency-era male perfection. And so a succession of relationships crashes and burns, and Jane secretly watches her P&P DVDs, and then hides them like contraband from others when they visit her apartment, just in case they should see them and guess at her grand obsession (and correspondingly pathetic lack of a love life).

Then Jane's Aunt Carolyn dies and leaves her an unexpected and intriguing bequest in her will -- a three week stay at a role-playing resort in England called Austenland, a complete immersion into Austen's world for obsessed fanatics such as Jane. Seizing the opportunity to lay her Darcy fantasies to rest forever so she can live for something real, Jane accepts the trip and and heads to Austenland to live as Miss Jane Erstwhile, circa 1816, for three weeks. Jane's resolve to put her Darcy-esque fantasies behind her forever is sorely tested when confronted with the reality of the handsome, cravat-wearing gentlemen who populate Austenland and pay court to female guests. In the ultimate Austen-lover's fantasy world, can Jane find something real?

I so enjoyed this book. Hale's novel is a witty, clever send-up of the rabid Austen / Darcy-mania that just about every woman I know can relate to in some degree. I would have liked to have seen the novel written in first-person from Jane's point-of-view -- the concept just screams "chick lit" and a change from third- to first-person would have enabled Hale to give greater insight and depth to Jane's character and smoothed out the narrative a bit. The supporting cast of characters that people Austenland is fabulous, though slightly underdeveloped. At a mere 194 pages, Austenland is an extremely short, fast read that begs to be about 100 pages longer (at least). I loved the world Hale created, and I loved Jane (I can SO relate to her Darcy-mania!) and a certain someone that she meets at Austenland -- I won't spoil the surprise for those of you reading the review by naming names, even though when you read the novel Jane's real-life "Darcy" is telegraphed VERY early on. However, this lack of suspense doesn't detract from the sheer enjoyability of the read. I just wish there was more of it. Primarily known as a young adult fantasy author (The Goose Girl, Enna Burning) Hale is a promising voice in funny, clever, chick-lit style novels and I look forward to reading more from her. Austenland is a perfect summer read -- what it may lack in substance it more than compensates for in wit and invention.

Another review from the archives, this time from 2007. I really ought to re-read this book - it's the perfect escapist read - fun, frothy, and can we say wish-fulfillment?! :) If you haven't read this, now's the perfect time to check it out, since Shannon Hale's next book is a sequel of sorts - Midnight in Austenland is due to release most likely in 2012.
Posted by Unknown at 9:09 AM

Great review! I read this book a couple of years ago and really enjoyed it. I really need to get it from the library again! :)

I also love Shannon Hale's other books. Especially "The Goose Girl" and "The Princess Academy."

P.S. I didn't know she was writing a sequel/companion to "Austenland." That's exciting!

I can't believe I haven't read this yet :)

I haven't read this yet either. That will soon change though, since I've placed it on hold at the library. :)

This review made me wonder, have you ever seen the British mini-series Lost in Austen? If not, you really need to watch it and then write about it!

@Kristin - Thank you! I need to read more of Hale's stuff. And isn't the news of a follow-up Austenland thrilling?! Can't wait!

@Juju - Oh I think you would LOVE it!

@Renee Ann - I LOVE LOST IN AUSTEN! It is tragic that I have never blogged about this...thanks for the suggestion!

@Caroline - I hope you enjoy it!