Review: Lady in the Mist by Laurie Alice Eakes 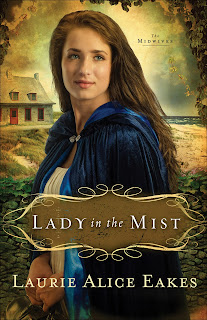 Lady in the Mist (The Midwives #1)
By: Laurie Alice Eakes
Publisher: Revell
ISBN: 978-0-8007-3452-7
About the book:
By virtue of her profession as a midwife, Tabitha Eckles is the keeper of many secrets. Dominick Cherrett is a man with his own secret to keep: namely, why he, a British aristocrat, is on American soil working as an indentured servant.
In a time when relations between America and England rest on the edge of a knife, Tabitha and Dominick cross paths, leading them on a journey of intrigue, threats, public disgrace, and...love. But can Tabitha trust Dominick? Finding true love seems impossible in a world set against them.
With stirring writing that draws you directly into the story, Lady in the Mist takes you on the thrilling ride of love's discovery.
Review:
At twenty-five and considered a spinster, Tabitha serves her seaside Virginia town as midwife and healer – the only source of medical care for miles, and the keeper of many a secret that would set gossipy tongues afire. Her medical knowledge makes her an indispensible member of the community, but as an unwed woman, and privy to her neighbors most intimate secrets, she’s set apart – not a quite a lady, not quite a servant. Wounded by the pain of loss and loneliness, Tabitha determines to protect her fragile heart at all costs. But a chance encounter with Dominick, a charismatic English bondservant, leads to a friendship that will test her resolve and unwittingly involve her in a plot to foment war with England through that country’s practice of impressing American men into naval service. Dominick’s warm brown eyes and carefree manner tug at her heartstrings, and soon Tabitha finds herself falling for the one man whose suspect heritage calls into question her reputation and endangers her life. With America and England dancing on the precipice of war, Tabitha and Dominick are thrust into a tangled web of treachery that demands they trust each other – but can those who have lost so much find the faith to risk loving again?
I was immediately intrigued with the idea of a midwife heroine, but Eakes offers much more than that, lacing Tabitha’s life with spies and dangerous secrets. I had no real grasp of the role a midwife played in her community as revered healthcare provider and feared secret keeper – a delicate balance required to maintain one’s reputation, even moreso for a single woman such as Tabitha. But the actual work of midwifery is surprisingly secondary to the position that work places Tabitha in relative to the town’s affairs. Thanks to the nature of her work, Tabitha is granted the freedom to move about without question – unparalleled access for a woman, and rife with possibilities for discovering highly charged secrets involving the missing townsmen. I recall studying press gangs in history classes, but Lady in the Mist is the first fictionalized account I’ve read where the impact and horror of the practice is a central plot point, a storyline that proved fascinating to me.

Tabitha and Dominick’s story is a fast-paced, romantic read, and with a little polish to certain stylistic elements further novels in the series hold the potential to be even more engaging. The structure and flow of the story suffers from the tendency to end chapters on tremendously exciting cliffhangers, only to abandon the plot thread for a chapter or two and resume it later, sometimes often after the conflict in question has been resolved. This dramatically decreases the suspense of the reading experience and results in a choppy narrative flow. And while I personally appreciated the inclusion of so much early 19th-century history, vis-à-vis British and American relations, I feel like Tabitha’s profession – fascinating in itself – received the short shrift. Further midwife-centric tales would benefit from a greater focus on the heroine’s profession and the inclusion of more detailed information about her work.

The spiritual thread of the novel is wrapped up in each character’s search for redemption in some form. Personally I would’ve liked more exploration of Dominick’s past and the events that brought him to America and less of wayward  fiancé Raleigh’s obsession with “fixing” Tabitha’s spiritual well-being. And while Tabitha and Dominick’s romance develops a bit quickly, there’s a sweetness to their relationship and the appeal of Dominick’s chivalry that cannot be denied (his propensity for over-the-top, flowery language notwithstanding). Though it could benefit from a tighter narrative, Lady in the Mist is an enjoyable slice of escapist fiction, owing its success in equal parts to a unique historical angle and its heroine’s unusual profession. I look forward to seeing how the author’s storytelling craft develops in further novels following this promising series debut.
Posted by Unknown at 3:38 PM