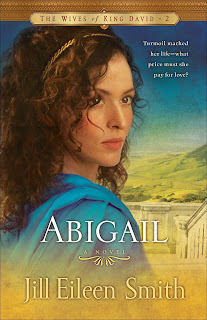 Her days marked by turmoil and faded dreams, Abigail has resigned herself to a life with a man she does not love. But when circumstances offer her a second chance at happiness with the handsome David, she takes a leap of faith to join his wandering tribe. Still, her struggles are far from over. How can she share his love with the other women he insists on marrying?

For her second novel in The Wives of King David series, Jill Eileen Smith explores the life of Abigail, David’s third wife, who came to him while he was still living in the wilderness, running from Saul’s never-ending attempts to end his life. As a widow and a non-royal, Abigail has a strikingly different background and perspective than Michal, David’s first wife, whose story was told in Smith’s first book. While Michal was a privileged princess, Abigail hails from a poor, but loving family, where she is given in marriage to the loutish Nabal in order to settle a long-standing family debt. For the innocent, God-fearing Abigail, her first marriage is a nightmare from day one, and the emotional and physical abuse she suffers takes an increasing toll on Abigail’s well-being and confidence. But she never loses her faith, and when the opportunity comes save the household when Nabal foolishly incites the wrath of David and his followers, she seizes the chance to bring peace to the situation. Little does she realize that her extraordinary act of bravery will set her on a path to capture the heart of God’s anointed, placing her in a position to impact the fate of her people through marriage to the future king.

Although many of the events in Abigail were also covered in Michal, the different female perspective, coupled with a greater focus on David’s years in the wilderness, work together to provide a richer, more fully realized picture of David’s life and character. Smith paints a portrait of David that breathes life into the extraordinary man of God seen in the scriptures, while also bringing to vivid life his flaws and human frailties, making him painfully human and relatable. When David begins to justify taking additional wives in order to expand his household, the result of his all too common human ability to rationalize his desires will have ramifications far into the future. Abigail, so different from her predecessor Michal, is fully fleshed out into the intriguing character that’s only hinted at in 1 Samuel 25. Abigail is the polar opposite of her foolish first husband – beautiful and wise, the abuse heaped on her during that marriage could have broken her character. Though she struggles with fear, jealousy, and trust, Abigail never allows her experiences to define her; rather, her faith takes those experiences and refines her into a woman whose bravery, faith, and compassion make her a thought-provoking, unforgettable inspiration.

I didn’t think Michal could be topped, but with Abigail Smith rises to the challenge and proves to be an even more gifted wordsmith and storyteller. Her passion for scripture and biblical history shines through each page, bringing Abigail’s world to life in brilliant detail. Like Michal, Abigail spans many years, and the time transitions scripture quotations are handled better, resulting in a smoothly flowing, rapidly paced read. I really feel like Smith captures the mindset and customs of the time, because she manages to bring Abigail and David’s love story to life with credibility – a feat that by today’s standards seems nearly impossible given that Abigail competed with David’s other wives for his time and affection. The social dynamic Abigail operated within seems so foreign, but Smith succeeds in presenting the reality of a woman’s life during this time period in a compassionate and understandable way. Once the historical trappings are stripped away, what endures is Abigail’s character and her unshakeable faith in an unchanging God who helps her overcome her fears and grants her peace in the midst of life’s storms – a lesson in faith that still resonates today.
Posted by Unknown at 10:48 PM