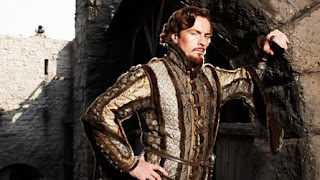 Do You Love Me? is probably my favorite episode of season 3 of Robin Hood to date. At long, long last we're treated to the introduction of Toby Stephens as Prince John. I freaking love Toby Stephens - whether he's playing a baddie as he does in Die Another Day or a romantic hero as he does in Twelfth Night or Jane Eyre, he does it brilliantly. And to have Stephens playing opposite Richard Armitage (who smolders more than usual as Guy in this episode - yay!) is a bit of a dream come true.

I think it was my friend Kaye who made the comment that any episode that starts off with a shirtless Richard is sure to be good. ;-) I think that's a very good rule of thumb, just sayin'. The episode begins with Guy being dragged before the Prince and ordered to kill the Sheriff (Keith Allen) - since he's failed to deliver Robin Hood's head on a platter, it follows that he doesn't love his prince enough. Right away Stephens gives the character of Prince John the perfect balance of vanity and menace. And he speaks about himself in the third person, just hilarious! I think Prince John is a bit of a tricky character to get right. It's too easy to make him a complete fop, you know? However, since the showrunners made King Richard a complete & total loser (as seen in the season 2 finale), I wanted Prince John to be a legitimate threat. Thank goodness Toby Stephens was cast as the Prince...that is one thing the showrunners got right this season. John may be wonderfully vain and full of himself, but he's a real threat to doofus Richard's claim to the throne.

Likewise, this episode is a fantastic showcase for Guy and the Sheriff's deteriorating relationship. Guy is on fire here - once the prince gives him the sort of approval and validation that the Sheriff never has, he's out for blood (and an intense, smoldering Guy is always fun to watch). :) It's also interesting to see Allen play the Sheriff with a little uncertainty. He knows, or suspects, that Guy is out for his job, but he also recognizes that Prince John isn't to be trusted. It's a case of the devil you know, or the one you don't, I guess you could say. When Guy and the Sheriff start their fight, wowzers, was that a satisfying scene. The Sheriff's been manipulating Guy for over two seasons now, and to see Guy snap - and how he blames the Sheriff for driving him to kill Marian - made for fantastic, dream-come-true viewing. It was a total Richard Armitage fangirl moment. :) Guy wasn't after the Sheriff to curry favor with the prince - this was a moment for him to try & kill the Sheriff's control over his life. Easily the most intense fight scene in the show's history, very well executed.

Isabella (Lara Pulver) makes her second appearance here - and she's two-for-two as far as appearances go & my liking the character. She's a resident of the castle, but makes it clear that she doesn't approve of the Sheriff, Prince John, or her brother's methods. She's apparently biding her time - not sure if we're supposed to get that she's out to revenge herself against Guy for selling her into a bad marriage or what. I have to say, I did enjoy Isabella's little moment with Robin (Jonas Armstrong) after she helps him put out the fire started on the prince's orders in Locksley. Pulver and Armstrong have some serious on-screen chemistry in this scene, and it's a good little moment for Jonas Armstrong reveal some rakish charm. ;-) I also liked Isabella's scenes with Prince John - he's so obviously smitten with her, and she plays him like a fiddle - their moments together are quite humorous.

The biggest downfall to this episode is, once again, Kate (Joanne Froggatt). This episode is just mean...Kate goes and gets herself wounded when the outlaws attack Prince John's decoy, and then she has the nerve not to die. *sigh* The potential there just crashed & burned. And to add insult to injury I had to watch Much (Sam Troughton) and Allan (Joe Armstrong) trip all over each other with concerns for her welfare (GAG!), and then, THEN she goes and has the nerve to make eyes at Robin. SERIOUSLY?! We had to go THERE?! Brace yourselves, people, I'm sure it's only bound to get worse. *sigh*

That annoyance aside, the Prince John-Guy-Sheriff dynamic made this episode one of season 3's best. There were many, many more moments of Toby Stephens' brilliant portrayal of Prince John that I could have gushed over, but I'll refrain. :) And yay for Guy finally snapping and turning on the Sheriff. It's not quite the same as owning to his mistakes, but it's a step in the right direction that's been a long time coming. Love it.
Posted by Unknown at 11:51 AM

Toby Stephens as a prince? That's got to be full of win.