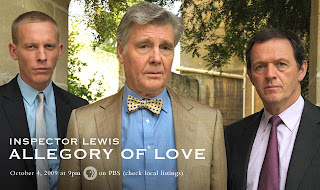 Wow, have I ever gotten behind on my Inspector Lewis reviews. But never fear (ha!), I am determined to get caught up, especially since this run of shows ends this Sunday (*sob*!). Dang that pesky vacation. ;-) Allegory of Love is the episode I missed while in NYC, and it was one of my favorites, ranking right up there for me with Music to Die For as far as quality goes. Here is the brief episode summary from the PBS website:

Young and handsome Oxford writer Dorian Crane is following in the noted fantasy footsteps of C.S. Lewis and J.R.R. Tolkien with his newest book. The day after Crane's book launch party, reality shatters the celebratory mood when a young Czech barmaid is found dead by the river, savagely murdered with an antique Persian mirror. Some of the grisly circumstances seem to have been lifted from Crane's fiction. But the celebrated author claims no knowledge of the crime, instead fawning over his bride-to-be and muse Alice Wishart. At the murder scene, Lewis and Hathaway find a one-word note scrawled in blood that references a place in Iraq. As a result, Lewis and Hathaway get pulled into the world of Oxford's literary elite, only to find that it harbors resentment and jealousy and at its center, holds terrible secrets beyond all imagination.

I love the Oxford setting of the Lewis mysteries - the atmosphere lends each episode a rarified, academic tone that just can't really be found in other mystery shows. Allegory plays the Oxford/academic angle to the hilt, positively dripping with literary allusions. As an English major I'm probably extra biased towards this episode because it's the most literature-oriented mystery to date. It all starts when Lewis (Kevin Whately) attends a booksigning where up-and-coming Oxford research fellow Dorian Crane (Dorian Gray, anyone?), played by Tom Mison (also known as Mr. Bingley from Lost in Austen!!), is signing his latest fantasy epic. I've got to say I enjoyed watching Mison stretch his acting chops here - he's definitely an actor to watch IMO. Crane is attempting to restart the Inklings - so right off the bat this episode gives one Oscar Wilde, J.R.R. Tolkien, and C.S. Lewis references. A gruesome pall is cast over the festive book signing atmosphere when a Czech barmaid (random, anyone?) is found brutally killed by an antique mirror bashed over her head.

At first glance, there doesn't seem to be any connection between Oxford's literary elites and a "lowly" murdered barmaid. However, the more Lewis and the intrepid, brilliant, lovely (okay, I'll stop now - ha!!) Hathaway (Laurence Fox) investigate, the more surprising revelations about some of Oxford's to professors come to light. Seriously, the profs are creepy, I'm just sayin'. One has to marvel at the way they cover for each other one second, always ready stab each other through the back if the need arises. The professor angle is particularly interesting since one of the suspects - Norman Deering - is played by James Fox, Laurence's real-life father. This connection made Lewis's comment to Hathaway about Deering being into "that celibacy" thing like Hathaway extra hilarious. Actually, they CRACKED ME UP. ;-) Like father, like son. Haha!!

The red herrings and misdirection this script throws at a viewer kept me in the dark until the end. In fact, I had serious doubts about the filmmakers ability to pull all of the disparate plot threads together into some sort of comprehensible resolution. Happy, for my money, they succeeded fairly well. Sure, this story is INSANELY crazy and convolutated, but I enjoyed the wild twists and turns. Who'd have thought one episode could cover an "Alice through the looking glass" murder, death by Peter's sword (of Narnia fame), wrapping up with an insane Oedipal complex run amuck. Lewis, my friends, covers a lot of literary ground.

Sorry for the real-time freak out, but I just realized that TWO, count them TWO Pride and Prejudice adaptation alums appear in this episode!! One of the many suspects, Jem Wishart, looked quite familiar but I couldn't quite place him - I just looked up the actor on the IMDB, and Wishart was played by Adrian Lukis, who played Wickham in what is commonly known in my world as the Colin Firth Pride and Prejudice. ;-) Seriously, seeing how Lukis has aged here kind of cracked me up, just had to say that up front. Actually, his character here isn't really improved from his famous turn as Wickham - morally Wishart is just as much of a mess, only meeker.

For another perspective on this episode, check out Heidenkind's blog.

PS: Seriously, how sad and just a bit funny, in an ironice sort of way, is it that Lewis's boss spent most of the episode trying to fix him up with a PSYCHOTIC KILLER?!
Posted by Unknown at 4:19 PM

Oh, you had to know she was the killer as soon as Lewis' boss started setting them up. Lewis can't get a break, I tell you--like he has room to rib Hathaway about "the celibacy thing"! :P

I knew I recognized Adrian Lukis from P&P (I've seen that movie way too many times), but I couldn't place him. Wickham! He really has aged, hasn't he? Sad. But I didn't recognize Dorian as Bingley at all! He is a really good actor.

As for that uber-creepy prof being Fox's RL father--that is sooooo funny. Lewis comments make so much more sense now!

@heidenkind - In hindsight you are absolutely correct about "the MOTHER." But I did think that some of the professors made really strong murder suspects. And SO true, where does Lewis get off ribbing Hathaway about celibacy? They crack me up!! :)

Just to clarify, Dorian was played by the Bingley actor from Lost in Austen, not the absolutely fabulous Colin Firth P&P Bingley. That Bingley was played by Helena Bonham-Carter's cousin...or brother?...can't remember.