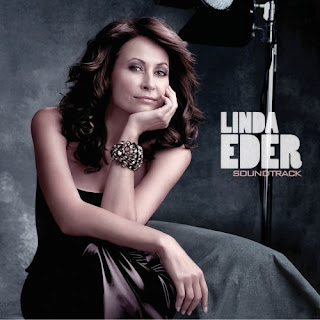 I couldn’t be happier with Linda Eder’s latest release, Soundtrack. And a huge thank you to both Eder & her label, Verve, for giving the fans new albums two years in a row – way to deliver, Eder & team! As a film music album, Soundtrack is a throwback of sorts to the type of music that garnered Eder legions of fans – Broadway showstoppers and standards – but with a generally more understated, intimate feel to the set. Her first album for Verve, The Other Side of Me, was a departure from that previous norm. While I loved that release, it’s decidedly more laid-back, country feel marked quite a change from releases like It’s No Secret Anymore or By Myself. Soundtrack sees Eder interpreting 11 songs from a wide variety of films, ranging from the Henry Mancini-Johnny Mercer penned “Charade” (from the 1963 film of the same name) to “Falling Slowly” from the 2007 sleeper hit Once. From the well-known to the more obscure, Eder takes each song and puts her own unique spin on the lyric and arrangement. It would’ve been so easy for Eder to deliver power-ballad versions of classics like Elvis Presley’s “Can’t Help Falling in Love” or Bryan Adams “(Everything I Do) I Do It For You.” However, I’d argue that you’ll be hard-pressed to find versions that are more elegant, understated, and emotive than Eder’s take on these classics. The lyric is front and center, and Eder proves once again that she’s a master at wringing ever drop of emotion, every nuance, from the words of a song. Another of my favorite tracks is the stunning version of “Falling Slowly” – the power in this arrangement and delivery gives one chills! While the Presley and Adams songs are perhaps not unexpected song choices, Eder also ventures into some surprising territory by putting her own unique spin on the BeeGee’s “If I Can’t Have You” and the Beatles’ “Help,” the latter a tribute to her son’s love for their music. Prior to hearing the album, some of the song choices (like the Beatles’ cover) had me wondering if Eder could successfully pull off her own version. I need not have doubted. The entire album has a cohesive, beautifully constructed feel to it, and Eder succeeds in making each song her own. Sountrack would be an excellent companion piece to Eder’s 2003 musicals-themed album, Broadway, My Way. It’s also a great set with which to introduce new fans to Eder’s work, in how it successfully melds her ability to interpret classic song with the more laid-back, country-touched arrangements she’s favored in recent years. This album is another winner from Ms. Eder, one I’ll be enjoying for years to come.
Posted by Unknown at 12:11 PM

@heidenkind - It's a great album (but admittedly, I'm biased). :) Hope you get the chance to check it out!