Review: By Myself by Linda Eder

I originally reviewed this fantastic album back in 2006. 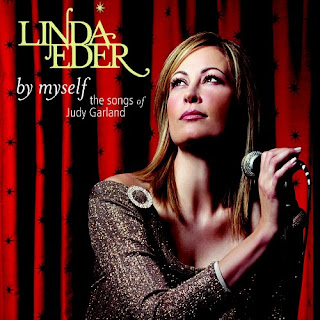 By Myself: The Songs of Judy Garland, by Linda Eder, is a brilliant album. I absolutely love it. It easily makes the top five in my favorite albums of 2005 (if I were to ever bother to create such a ranking). My fears about losing Linda's crystal-clear voice in a tribute to her idol, Judy Garland, have proven to be unfounded. One of many reasons to rejoice about this album is that there is no Frank Wildhorn music on this disc. I like a lot of Wildhorn's work (the Broadway shows Jekyll & Hyde and The Scarlet Pimpernel), but I am thrilled that Linda is finally getting a chance to expand her recording repertoire (her 2002 album Gold contains some of Wildhorn's less than stellar work, as well as some truly insipid, uninspired covers...I think there are three good songs on this disc, maybe). The arrangements on By Myself are absolutely fantastic...they pay a fresh tribute to Judy and her work without sounding overblown or trite.

In "By Myself" Linda's voice is eerily similar to Judy's...she emulates Garland's every vocal nuance to perfection. Perhaps this is done a bit too well...the arrangement is fantastic but I would've liked to hear more of Linda's trademark crystal clear high notes. Incidentally this is one of my favorite songs ever. However, the Judy comparisons end for me with the 2nd track, "Almost Like Being In Love/This Can't Be Love"--this song swings with a stellar, sparkling arrangement and Linda's voice soars. This sets the tone for the rest of the disc, which alternates between upbeat, swinging numbers and slow, smoky jazz (whoever first used the adjective "smoky" to describe jazz was brilliant). "It Never Was You" is an gorgeous ballad that serves as the perfect showcase for Eder's achingly poignant vocals. Linda outdoes her previous recording of "Over the Rainbow" (on It's Time) with her new version...and if you listen to them both that's really saying something...each one is stellar. "Rainbow's End" is the one original song on the disc, written by Jack Murphy. It's a tribute song to Judy that tells her story, and it fits in beautifully with the rest of the album.

Eder has the kind of voice that was born to breath new life into these classic songs, and as a fan I'm thrilled that she's finally had the opportunity to record an album of standards and to do it so well. I hope in future releases that she revisits this type of music, but perhaps she will be able to blend the old with new jazz/pop songs? Jamie Cullum is one of the best examples of doing this successfully, IMHO. We shall see...if this is any indication the future is bright for Linda's recording career. To compare Linda's incredible tribute to the original, check out the Essential Judy Garland, a one disc compilation of Garland's work that just released summer 2006.
Posted by Unknown at 6:18 PM

I'm surprised you're not reviewing the new Michael Buble!