Review: The Other Side of Me by Linda Eder 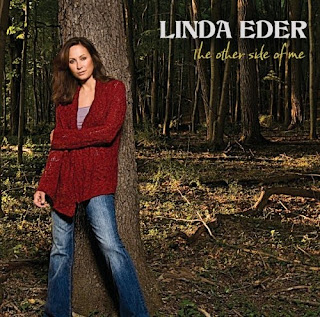 Linda Eder has always been known as primarily singer of show tunes and standards, a vocalist in the grand tradition of Barbra Streisand and Judy Garland. Her last album, By Myself: The Songs of Judy Garland, is perhaps the most glowing example of her voice’s ability to wrap itself around pop standards and make well-known songs her own while paying tribute to one of her vocal idols. If that album set a high standard (no pun intended) for reinventing the Great American Songbook, Eder’s latest – The Other Side of Me – finds the accomplished vocalist doing a complete 180-degree stylistic turn. The results are stunning. The last time Eder attempted to branch out into pop-country fare with 2002’s Gold, the results were mixed with one too many less than stellar covers and weak arrangements, mixed with some outstanding gems (like “Gold”). With the backing of a new label (Verve), Eder and producer Billy Jay Stein have crafted a solid album of country/pop songs with arrangements that perfectly frame Eder’s voice, which is perhaps at its most relaxed and joyful. Eder’s cover of “If I Could” blows Celine Dion’s (from her Miracle album) version out of the water. The song brims with emotion, Eder’s voice pure and crystalline backed by a piano-based arrangement. Cover-wise Eder also delivers gorgeous renderings of Joni Mitchell’s “Both Sides Now” and the Indigo Girls’ “Ghost,” the latter of which has become one of my favorite Eder songs. It’s absolutely breath-taking. Songwriter extraordinaire Kara DioGuardi (who penned the Celine Dion hit “Taking Chances”) contributes “Back to Life,” an upbeat number that’s just one of many cuts on the album that could potentially find a home on country radio. Along with “Ghost,” my other favorite song on the album is the Linda Eder-penned “Waiting For the Fall,” a funky, blues-rocker of a number that recalls the likes of Carrie Underwood’s smash hit “Before He Cheats.” The Other Side of Me is a winner for Eder – she’s taken a risk that’s paid off in spades artistically and solidifies her position as one of today’s pre-eminent vocalists in everything from pop to country fare. (If you can, pick up the Barnes and Noble exclusive edition of TOSOM with the bonus track “Everything Comes and Goes” – it’s worth it!)
Posted by Unknown at 6:26 PM