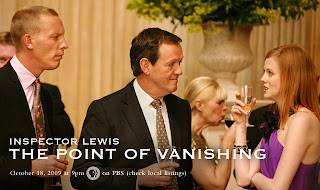 I'm home sick today, and since the DVD player decided to DIE ON ME (GRRR!!), and I'm feeling relatively lucid (haha), I thought I'd finish blogging about the final Inspector Lewis episode, Point of Vanishing, which aired last Sunday. Here's the episode summary from the PBS website:

Steven Mullan is found dead in his bathtub, the scalding water indicative of the white-hot rage that motivated the murder. Lewis recognizes Mullan as having been recently released from prison after having tried to kill celebrity atheist Tom Rattenbury while driving drunk. Mullan's sentence may be over, but have the scars healed for the Rattenburys, especially daughter Jessica who remains in a wheelchair from the incident? Lewis and Hathaway find a postcard at the crime scene of a Renaissance painting inscribed with the words, "It was no dream." But the case is about to take a surreal, dream-like twist, leaving Lewis and Hathaway drowning in questions about crimes of the past and the present.

I thought this was the best Hathaway-centric episode yet. Laurence Fox really got a lot of screentime to shine and showcase his wonderful ability to be the strong, silent, and angsty type. ;-) The biggest surprise of the episode was giving Hathaway a little love interest - talk about a missed opportunity, showrunners! *sigh* It would've been lovely if they'd managed to introduce the newly-promoted Fiona (Catherine Walker) at some point prior to the last episode of Lewis (hopefully only for the time being, I haven't heard whether or not this series is returning).

Anyway, Lewis's (Kevin Whately) realization that Hathaway isn't just upset because of a missed promotion is actually kind of a sweet moment. You really get to see the sort of father/son, or at the very least older brother/younger brother sort of bond that has developed between the two of them over the course of their partnership. Also, you've gotta love the jokes that flew between the two of them about how they're attached at the hip, etc. Very nicely played IMO. :)

The mystery itself was actually pretty interesting - talk about a "Mommy Dearest" NIGHTMARE!! It was nice to see Julian Wadham featured in this episode as Tom Rattenbury, famous atheist and henpecked husband. He's appeared in such shows as Foyle's War: Plan of Attack, My Boy Jack, and Marple: Sleeping Murder. He's the only actor I recognized from other productions, though I thought everyone else turned in pretty solid performances. Particularly Jenny Seagrove as Cecile Rattenbury, the manipulative mother from you-know-where. Oh my word, that woman was insane. And CREEPY. Creepy-insane!! The other members of the family weren't nearly as interesting, but that's okay because Hathaway and Lewis more than compensated. Especially Hathaway - when he broke into the gym and then took a flying dive into the pool to save the Rattenbury daughter from drowning, I seriously almost swooned. Dishy Laurence Fox, I do love you so. :)

If this is the last Lewis episode - and that's a big if, and one that definitely hopes to turn out to be untrue - it does offer a nice measure of closure. After all, Lewis is back in action, the man who killed his wife is in jail, and he's helping Hathaway of all people work through issues with his love life (who would've thunk that? LOL). Seriously, the last moment of the show, when Hathaway goes to tell Fiona how he really feels and they share that lovely kiss - was that moment not to die for?? Who knew Hathaway had it in him? Here's hoping the show returns in 2010.
Posted by Unknown at 3:29 PM

Sorry to hear that you're sick...but at least you got some blogging done! Get well soon! :-)

Hands off Lawrence Fox! He's mine. ;)

I thought this was the best episode of Inspector Lewis, too! And the mother was soooo psycho. I don't know how Lewis and Hathaway went an hour and a half not figuring out she was the murderer, I tell you. As for the rest of the family, I did really like Jessica--but yeah, the rest of them were boring. :P

@heidenkind - I'll fight you for Laurence! ;-) Maybe we could work out some sort of schedule...like a time share? Haha!!

LOL Sure, we could work out a schedule. ;)