Robin Hood 3.4: Sins of the Father 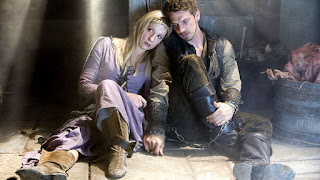 I am WAY behind in my Robin Hood blogging, I know, I know. But let the record show that I am determined to get caught up THIS WEEK. Just in case you need a refresher, the last time we visited Nottingham, Robin & the gang are accused of being heretics, and the Sheriff (Keith Allen) has sent Guy (Richard Armitage) off to pay homage to Prince John. The Sheriff is apparently becoming a bit stressed about his struggles to collect the cash he needs to keep Prince John happy - so he calls in a new tax collector - Ruthless Rufus. Yes, that is the best name the scriptwriters could come up with. *rolls eyes*

So Rufus arrives in Nottingham with his son Edmund, and starts throwing his muscle around. This of course antagonizes my least favorite addition to the cast EVER, Kate (Joanne Froggatt), who's taken to Rufus's home in order to spare her annoying mother. There Rufus forces her dance for his entertainment. Lame. Will Kate survive the attentions of the dastardly Rufus? Unfortunately for the show, yes, Robin (Jonas Armstrong) & crew stage a rescue. *sigh* Since Kate is now a known associate of outlaws, she has to take to the woods. In typical Kate-and-her-relatives-are-complete-ingrates, she and her mother aren't grateful that Kate's been saved from Rufus - instead she and her mother find a way to blame Robin for the fact she has to leave the town. ARGH!! To add insult to injury, Much (Sam Troughton) and Allan (Joe Armstrong) both apparently want Kate to like them - Much falls all over himself to try and appear in a favorable light. (Aside: Why are men so stupid?!?!)

In spite of Ruthless Rufus's alliterative moniker, he's a fellow with a somewhat interesting history. Unfortunately for the Sheriff, Rufus has a history in Nottingham - he saw the Sheriff take his father's shop from him years before. Since the Sheriff has no conscience, he of course isn't going to remember wrecking Rufus's boyhood - and since suffering hasn't made Rufus a more compassionate person, he's willing to trample anyone in the way of his quest for revenge. This extends to his son, Edmund, who's somehow grown up with some scruples and obviously doesn't approve of his father's tactics. I've got to say, it's a nice change watching the Sheriff get played - well, he's usually played, but by a good guy - it's a switch when a baddie is the one pulling the wool over Sheriff Vasey's eyes.

As you can tell by the above picture, Kate & Allan get themselves taken prisoner by Rufus, while Edmund gets himself taken as a hostage by Robin & the gang. Kate and Allan have a nice, nauseating moment bonding over their shared misfortune. If Allan was imprisoned with any one else I don't think I'd care...he's my favorite member of the gang, and I love and adore his smart-aleck sense of humor. I just hate to see it wasted on Kate. *sigh again* However, this prisoner exchange does have an upside. Little John (Gordon Kennedy) actually gets a bit of screentime since, as a longtime resident of Nottingham, he's the first to recognize Rufus (only he just can't place him at first). Poor Little John's been pretty criminally underused so far this season, hasn't he? Tuck (David Harewood) also gets the chance to practice being Dr. Phil when he tries to convince Edmund to quit making excuses for his father's criminal behavior.

There are parts of the "big reveal" at the end of this episode that I actually really liked. When the gang descends on Rufus's hideout to rescue Kate & Allan, the Sheriff also appears - in hot pursuit of the money he discovered Rufus has stolen. When the Sheriff goes all "fatherly" in his talk with Edmund about the fact that Rufus "has issues" I just rolled. This is a major case of the pot calling the kettle black, no? ;-) The icing on the cake is when Robin makes one of his impossible shots and the arrow magically hits the mark, preventing a crazed Rufus from killing his son. Gotta love Robin's bow work, I'm just sayin'...

By the end of the episode, Kate is an official member of the gang and she's magically let go of all of her anger issues (thanks to Allan's therapy session I guess). Thankfully there's a shakeup coming to the show with the next episode. I made a mistake in my post on episode 3 - for some reason I was under the impression that Guy was returning this week...don't know what I was thinking but of course, that's not the case. It's really TRAGIC, this being the last season of the show & all, that Guy's AWOL from TWO WHOLE EPISODES. Oh well, c'est la vie. :)
Posted by Unknown at 6:52 PM