I'm in a backstage movies kind of mood. I originally reviewed Dance, Girl, Dance on my old blog back in March. 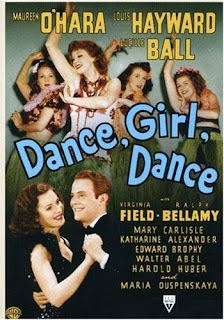 I caught part of Dance, Girl, Dance on TV a few months ago, so I was glad to find this movie was on DVD so I could finish the story. This film is a really interesting look at working-class women making their way in a “man’s world,” and actually has some pretty striking feminist sensibilities, considering it was made in 1940. This is probably due in no small part to the fact that the film was directed by Dorothy Arzner, one of the only major female directors from Hollywood’s “golden” age. The story follows two members of the same dance troupe – Bubbles (Lucille Ball) and Judy (Maureen O’Hara) – as they strive to hit the big time. The two friends are a study in opposites – Bubbles is all sass with a heart of gold and knows what she wants (money, and lots of it) and isn’t afraid to do whatever it takes to reach her goals. The conservative Judy loves to dance, not as a means to an end, but because dancing is her passion. Lucy really seems to relish playing the vampish Bubbles, and dominates every scene in which she appears. I don’t think I’ve ever seen Maureen O’Hara play such an innocent ingénue like the role of Judy – however, when Judy snaps and tells off all of the patrons of a burlesque club, it hints at the feisty, strong-willed personality O’Hara exhibited in her later films (particularly those opposite John Wayne). The subplot involving Louis Hayward, whose marriage is on the rocks, is pretty interesting – Judy’s interested because he’s hurting and she wants to “fix” him while Bubbles sees dollar signs. I only wish that Steve’s (Ralph Bellamy) character and relationship with Judy had gotten a bit more screen time. The DVD picture is crisp & clear, and the disc is padded with two extras – the short “Just a Cute Kid” and the cartoon “Malibu Beach Party.” I was pleasantly surprised by how well this movie has endured, and with it’s unusually strong exploration of women’s roles circa 1940, it’s a flick I see myself revisiting in the future.
Posted by Unknown at 7:27 AM

@Live - Definitely! We need to have an old movies marathon. :)