I originally reviewed this cast album in December 2006, prior to seeing the show on stage the following year. If you ever get the chance to see White Christmas on stage, I highly recommend it - it's a wonderful experience. 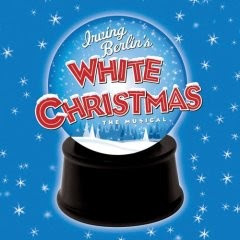 Irving Berlin’s White Christmas is one of the best musicals ever made – make that one of the best movies ever made. I absolutely adore it. This CD is the soundtrack to the stage version of the film. I so want to see this show. If the music is any indication, the show is an absolute blast. It’s chock-full of the classic Irving Berlin songs from the movie, with the addition of other Berlin classics such as “Happy Holiday,” “Blue Skies,” “How Deep Is the Ocean,” and “I’ve Got My Love to Keep Me Warm." The arrangements positively hum with energy – the music has a full, big-band flavor. And the principal vocalists, led by Brian d'Arcy James and Jeffrey Denman, are terrific – they don’t try to imitate their filmic predecessors Bing Crosby, Danny Kaye, Rosemary Clooney, and Vera-Ellen. If they had, that would’ve equaled disaster. What makes this album work is that you are given top-notch Broadway singers performing timeless Berlin tunes with life and energy. They’re not trying to present a carbon copy of the film onstage – the show is more of a love letter to the film, if you will. The story's been tweaked, some of the movie's songs eliminated ("Choreography" is no great loss IMO) or rearranged, but the nostalgic heart of the film's story is vibrantly present. Check out the show's website at WhiteChristmasTheMusical.com.
Posted by Unknown at 5:37 PM

I love White Christmas! We watch it every year.