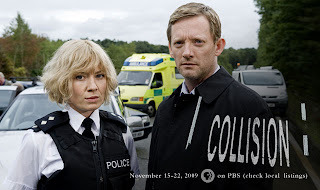 The 2009 Masterpiece Contemporary season is now over, and I thought I'd be taking a pass on the entire schedule...but then I was reminded that Collision starred Douglas Henshall (the dearly departed Cutter on Primeval), so of course I had to watch. :) I am SO glad I did. This program was a real treat, full of intricate plot twists and fascinating characters. When I looked up the show on the IMDB, I was even more thrilled to discover it was scripted by Anthony Horowitz. In case you've never heard of Horowitz, let me tell you, for what it's worth I think he's some sort of freaking genius. It's my understanding that any book he releases is guaranteed to be a huge bestseller in England (you can check out his work on his website here - books, film, television, & theater credits!). The primary reason I love Horowitz though is because he created the absolutely fantastic, perfect, wonderful mystery series Foyle's War. I love, love, love that show and should write more about it in the future. Just warning ya. :)

So anyway, back to Collision. I'm not going to do my usual critique/spoiler-fest that normally accompanies any post I write about yet another British show I love and adore. ;-) Shocking, I know. But I really think this program is such a wonderful surprise, such an intelligent drama, that I would wish any new viewers to the story to enjoy the surprises as they unfold. Here's the brief story summary from the PBS website, just to whet your appetites:

Point of impact — Friday afternoon on England's busy A12 highway. Six cars collide in a terrible spectacle leaving two dead. Detective Inspector John Tolin (Douglas Henshall, Primeval) is called in to clean up, and quiet the cries of racism coming from the family of one of the victims. But a methodical investigation only scratches the surface of the ten strangers involved, and the surprising and touching ways they are transformed after the accident. Senior Investigating Officer Ann Stallwood (Kate Ashfield, Poirot), herself entangled with Tolin, joins the inquiry as allegations of corporate crime, infidelity, shameful secrets and murder slowly rise from the wreckage. Written by Anthony Horowitz (Foyle's War) and Michael A. Walker, Collision investigates human nature, fate and the intriguing ways the truths of our lives are revealed.

This show is a veritable who's who of British acting talent, so without giving too much away I do want to give a couple of casting shout-outs:

Sorry, didn't meant to get carried away there. ;-) Those four actors are just a small sampling of the faces I recognized in the cast. The show is a true ensemble piece, superbly scripted and executed. This is a story that will leave you thinking about the ripple effect our lives have on each other, and how the smallest actions - or inactions - can have enormous consequences. It's a fascinating program. The DVD releases December 15th.

Here's a short video interviewing some members of the cast:

I'll watch it eventually--I swears. :) Now that I know that Horrowitz wrote it, I'm a little more optimistic.

Can't wait to watch the second part when I get home next week. Of course, I've gotten to "spend time" with "Paul McGann" by immersing myself in the world of William Ransome all day for the past four days as I try to finish RC.

Hope you had a wonderful Thanksgiving!

@heidenkind - Why am I not surprised you're familiar with Horowitz? ;-)

@Kaye - Likewise! Hope you're enjoying the week with the fam!!

Okay, I finally got around to watching it tonight, and it was awesome!!! I loved it. My favorite storyline was the one about the girl who worked in the gas station, and the rich guy started courting her. I was soooooo upset with him when he went to that board meeting. What a twat!

@heidenkind - I knew you'd love it, yay! :) The storyline with the rich guy was my favorite too - of course, it helped that the rich guy was played by Paul McGann and he was looking MIGHTY fine. :) I was so upset that he turned out to be a jerk too, but so happy that the girl went ahead and took the trip, and didn't let that stop her. That could be a whole other movie, her adventures in Europe!

It could! I suppose she was well-rid of him in the end, but yeah, McGann was looking pretty fine. :) I was sure he would turn out to be a knight in shining armor. *sigh*

@heidenkind - Sadly, McGann's character had no backbone. Very disappointing. And I couldn't figure out how his wife was still with him after all of his escapades!

It was a codependent relationship. Did you hear her as she was leaving? He'd bought return tickets, too; so he was never expecting to leave his wife.

@heidenkind - Oh, you're right - I'd forgotten about that bit. They were a mess, weren't they?