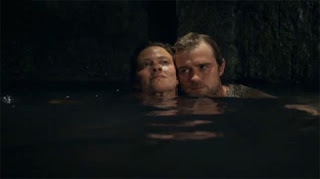 A drought's hit Nottingham in episode 7 of Robin Hood - a potentially deadly situation exacerbated by Prince John's need to be loved by the people. Robin (Jonas Armstrong) and Isabella (Lara Pulver) still have a thing for each other. I mean you know its real when Robin waltzes into town to bring his lady luv strawberries. The double entendre in that scene had me rolling, LOL! But I have to say, how freaking stupid do you have to be to stage your little strawberry rendevous in full view of Prince John's (Toby Stephens) window. Yeesh. *rolls eyes*

So Prince John sees Robin and Isabella together and orders Guy (Richard Armitage) to follow the two of them around to determine her where her loyalty lies. At this point like there's any question about that, but whatever, I get it, it's not like there's no precedent on this show for characters being really dense. I loved every single scene Toby Stephens appeared in, the man's portrayal of Prince John is everything I wanted and then some. It could be a bit disturbing to analyze how easily he plays characters that are so in love with themselves, but where would the fun be in that? ;-) I also enjoyed Guy's interaction with the Prince - poor Guy, he obviously thought getting rid of the Sheriff would mean great things for him right off, but that dream has not played out according to plan (huuuugggge shocker, right? LOL). And maybe I'm reading too much into Guy's expression, but Armitage gives the performance a layer that almost, almost makes you believe he feels bad about the whole situation with his sister.

I've got to give credit to the fight choreographers for the way they staged the three-way fight between Guy, Robin, and Isabella - with Robin and Isabella shackled together, no less! (Seriously, Robin is losing his touch - to let Guy sneak up on them like that is tremendously pathetic.) But I thought the fight scene was quite entertaining. And once again Richard comes through as the finest actor on the show by making it seem just barely possible that he wants Isabella to choose him over Robin. Does he not want to lose his one remaining family member? Does Izzy remind him of Marian? Am I completely and overly obsessed with every nuance of Richard Armitage's facial expressions? The questions are endless.

So once Robin and Isabella escape Guy (for now), Robin reveals just how seriously deluded he is about the whole Marian/Guy relationship. I cannot believe he actually tells Isabella, with a straight face, that Marian never gave Guy a reason to feel anything for her. What planet was he living on for the last two years?!

Anyways...Robin & Isabella manage to make it to where the water is blocked, followed (of course) by Guy who locks them in and leaves them to drown. Poor Guy is once again missing a critical principle of this show, that is, if you don't kill someone right off they will always find a way to escape. In the ensuing scene Isabella reveals just how badly she's pinned all of her hopes for escape & a new life on Robin, and not-so-shockingly Robin begins to cave under the pressure. He just can't go there because of the whole Marian debacle - as an outlaw, he can't have it all. Poor boy. So after this revelation, Isabella goes all Gisborne on us and turns on Robin, who has never learned the idea that hell hath no fury like a woman scorned. As brilliant as he likes to think of himself, Robin is not the brightest star in the sky, is he? 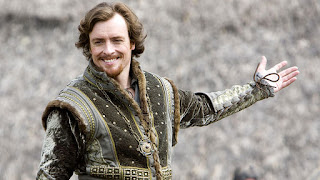 One of my favorite Prince John quotes: "Oh please, don't go all enigmatic on me Gisborne. Are they dead?"

So Isabella turns on Guy and Robin, and Guy just can't believe the sister he sold would throw him under the bus, but whever. This leads to not only another solidly staged and entertaining fight scene in the dungeon, but some freaking hilarious humor courtesy of Prince John. One of the strongest points of this episode are John's scenes - Stephens gets the chance to throw around some really funny, dry one-liners over and over - LOVED it. Now that Isabella has screwed up Guy's plans for royally-sanctioned power and position, he's got to go rogue...that makes me very happy. Just sayin'. :) I think it could be way healthier for Guy and Robin to bond over being dissed by Isabella (as opposed to the whole Marian mess).

Every scene with the rest of the gang bored me to tears - Tuck (David Harewood) comes off as really pompous and annoying to me, and Much (Sam Troughton) is just sad with this hopeless crush he has developed on Kate (Joanne Froggatt). I have to give Kate some credit for annoying me less this episode than she has in all of her previous appearances. Maybe it has something to do with the fact that her hairstyle has changed? I don't know, but don't worry, I'm not about to jump ship and become a Kate fan. ;-)