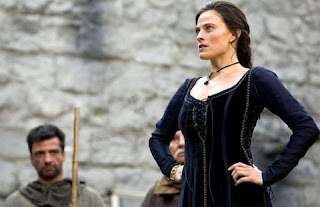 Spoilers...
I'll start off by saying this episode is the crowning jewel of this otherwise horribly uneven and spotty season of Robin Hood. If the episode focused entirely on Guy (Richard Armitage) it would've been absolutely perfect, because his storyline here was a freaking dream come true. But, before I talk about the really good stuff, let's get everything else out of the way first. :)
Sometime between this episode and the last, Isabella's (Lara Pulver) been officially appointed Sheriff of Nottingham. Go figure. We are allowed to see some of just how conflicted a woman she is - her marriage has scarred her, but it's not left her entirely without some good impulses. She's got a female empowerment agenda thing brewing, but she barely gets started implementing that by freeing village girl Meg (Holly Grainger) from an unwanted marriage before the much talked of but never seen husband Thornton (Nicholas Gleaves) shows up. Gleaves looked terribly familiar, but in glancing at his IMDB page I didn't recognize any credits. (Oh, and more on Meg later.)
Thornton is a terrible piece of work to say the least, and when you see the fear in Isabella's eyes at his appearance you can't help but have compassion for her situation. She is obviously a victim, but she hasn't lost her ability to use her past circumstances to manipulate Robin. This of course plays right into Robin's biggest weakness - the need to be the hero/savior. *sigh* Robin needs to get a grip.
The whole Robin (Jonas Armstrong) - Kate (Joanne Froggatt) - Much (Sam Troughton) thing gets a lot of screentime and is so wrong, on so very many levels, and so pathetically executed...well really is there more to say besides that (I realize that's rhetorical because OF COURSE I'm going to say more...haha!!)? I felt like the scenes involving that threesome were so junior high it wasn't even funny. And every scene involving poor Much's crushed hopes and dreams as regards Kate were downright painful. Why didn't Kate just cut out Much's heart and stomp it into the ground??? And so all of a sudden Kate is the best thing to ever enter Robin's life - even Little John (Gordon Kennedy) talks her up. Yeesh what is wrong with all of these people?! Robin has gotten unforgivably stupid about women, but this has been going on so long, with no promise of correction, that I sort of feel numb to it all by this point. Marian is rolling over in her grave, Robin. Yeesh!!
So by the end of this episode, Isabella's dispatched her evil husband - personally I think they could've milked that storyline a little longer, but oh well. She's got a nice evil queen vibe going on - she is CRAZY, but really her brand of crazy just ultimately made me nostalgic for Keith Allen's take on the Sheriff. *sigh* 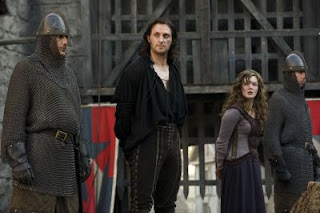 And now for talk about the best Guy scenes EVER! *swoon* Guy is in prison awaiting execution, and let me tell you, NO ONE can rock the whole dark, brooding, facing death yet unbelievably appealing thing like Richard Armitage. Excuse me while a swoon some more for a second (AGAIN!). :) He's thrown into the company of Meg, a self-proclaimed man hater who Isabella automatically connected with - but sadly Izzy's plans for her new BFF are going to fall through BIG TIME. Because no one in their right mind can resist the allure of the dark knight that is Guy. :) (Except of course the crazy sibling...)

Meg and Guy's scenes are fantastic. Because they're both in jail they're on equal footing, and Meg isn't afraid of speaking her mind and calling Guy out on everything from his attitude to his past actions. This is the kind of self-reflective time and turning point moment that I have wanted to see from Guy ever since he snapped and killed Marian in the finale of season two. He's just not supposed to be that guy who can do something like that without suffering consequences and repercussions. As he tells Meg, (referring to Marian) she believed in the better side of him, believed he could be a good man, and he let her down. When he says death means nothing because he's already in hell, you know that's true, because until he met Meg, he'd destroyed the only other person that believed in him at all. When Meg defies Isabella to try and free Guy, for the first time in ages, if not ever, his first thought is to save her instead of himself. There's no ulterior motive, no desire to play the system. He's reached a point of selflessness and heroism that I always knew was there, and I was just dying to SEE it. So thank you, Richard Armitage, in the midst of the mess that is season three, for giving me this performance. 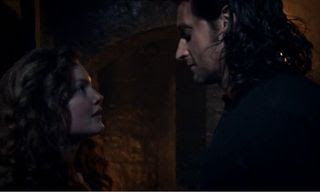 Since we already know that Robin Hood's been cancelled, it's a bit pointless I guess to wish for what might have been. But I can't help but wish that the showrunners had wanted to develop the Meg/Guy relationship a bit further. Granted, her death scene was gut-wrenching, and having Guy actually break down and cry was a fanastic moment to witness. I'm going to pretend to read Richard Armitage's mind here, but who cares? ;-) (Isn't that what an obsessed RA fan would do? It feels right...haha!!) I felt like Armitage wanted to convey that Guy was crying for more than just Meg's death - it was for all of his character's lost opportunities. So tragic, yet so loverly to see. :) I thought Grainger and Armitage had great chemistry together, and I loved how Meg was not a character who was going to give Guy and inch. She was quite a spitfire, and their relationship would've been a lot of fun to watch develop (much more rewarding than the Robin/Kate debacle). I look forward to seeing Grainger in more shows (she's appeared in an episode of Merlin, to name one recent credit).

This was a beautiful, fantastic Guy-centric episode and it's definitely a highlight of the season - one ep that will be getting rewatched a lot in the future once the DVDs release. ;-)

Check out this link for some great Guy wallpapers!
Posted by Unknown at 11:34 AM

Great review! It was like reading my own thoughts. This was my favorite episode of season 3. It shows that S3 had a few good points along its flawed path. :)

Edit: Like reading my own thoughts, except better because you put things more eliquently than I could. (This is what my review would've been straight from thoughts to words: Kate-ugh! Robin-*roll eyes* Gisborne & Meg: Yay! then *sniff, sniff* Much- those jerks don't deserve your friendship! etc.)

Ruth, I haven't watched but want to after this. However, in light of your highly entertaining, humorous, and insightful reviews, the show would simply pale in comparison, so will save myself the trouble:) Holding out for Emma...

@Nat - Thank you so much for your kind comments! That means a lot, especially coming from a RA fan like you that runs such a fantastic RA-centric blog!! :)

@Laura - Oh, this episode was FANTASTIC (just in case I didn't convey that adequately enough, haha!!). I hope you get the chance to see it at some point. And even though you haven't been watching, glad you've enjoyed my little thoughts on the show. :)

Excellent review! This is definitely the best episode in RH3. It was good to see Holly Grainger and Richard Armitage performing together again after some years since they first met and acted in Sparkhouse. They both have greatly improved and were excellent in this episode. I've tried to put the best moments of Meg and Guy all together in a videoclip. If you want you can find it
at http://www.youtube.com/watch?v=v4NcPgw_3_0
Nothing special, just the best bits, all together.

@Maria - Hi & welcome to the blog!! Thanks for the feedback. I've never seen Sparkhouse but I'd love to someday given the level of my RA obsession. ;-) I'm checking out your video now!