Review: Me and Orson Welles by Robert Kaplow 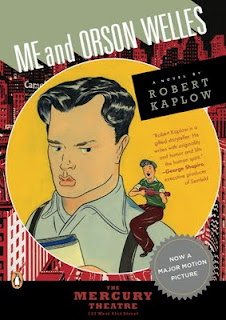 With this beginning, Robert Kaplow sweeps readers into a breakneck romantic farce that reads like a Who’s Who of the classic American theater. At center stage is the twenty-two year old Orson Welles, about to launch his debut production of Julius Caesar. Enter Richard Samuels, an achingly sincere teenager who literally walks into his first acting job. What he finds is a whirlwind of comedy and pathos, self-absorbed celebrities and their outsized egos, art and love. Me and Orson Welles is a joy.

When I saw the trailer for the upcoming film Me and Orson Welles, I knew I had to read the book on which the movie is based. The story looked tailor-made to cater to my tastes – the clothes, the music, the theater of the time period, I love it all. With the book, Robert Kaplow has crafted a witty and insightful coming-of-age story that doubles as one of the best love letters to a bygone age that you could wish for. (Just a heads up, there is some off-color language in this book – I would’ve preferred a less, but if you can get past that the story is that the story is terrific!) In the late 1930s, America was in a depression with no thought of the war to come, and master songsmiths like Irving Berlin and Cole Porter were making their contributions to what would become known as the Great American Songbook. It was a “golden age,” when American films featured stars like Gary Cooper and Cary Grant, and the theater was peopled by the likes of the Barrymores and young Orson Welles.

Into this glittering theatrical world, seventeen-year-old Richard Samuels literally stumbles upon his first acting job – a bit part in Welles’s fledgling Mercury Theatre production of Julius Caesar. Full of big dreams and hopelessly idealistic, Richard has no idea what he’s gotten into when he joins the production and finds himself in Orson Welles’s starry orbit. Welles is a star on the rise and he knows it. The man is a pompous jerk but the allure of his genius is irresistibly strong and undeniable. In one short week, Richard probably learns more about life, love, and his own purpose and self-worth than many people do in an entire lifetime.

Richard’s voice just shines and makes this novel a joy to read. He’s worldly-wise yet naïve, sarcastic yet sweet – in other words, a typical teenager made up of all the confusion and contradictions that accompany that time of one’s life. Kaplow also excels at building his setting – he absolutely nails NYC. The city itself is as much of a character as Richard or Welles, and reading the descriptive passages in the novel made the sights, sounds, and smells of the city come alive. This book is also one of the best mash-ups of fiction and historical fact that I’ve ever come across. I’m a huge classic film fan, so reading about Orson Welles’s theatrical beginnings, or learning that actor Joseph Cotten was a member of the Mercury Theatre troupe, were absolutely fascinating. While I could never claim to be a Wellesian scholar, based on my perception of Orson Welles’s character from his films that I’ve seen, Kaplow has done an excellent job of capturing the essence of the man. Every time Welles spoke on the page, it was his unmistakable voice that I heard in my head while reading.

If you’ve seen the television show Slings & Arrows, Me and Orson Welles comes as close as you could wish to capturing the humor, angst, and life found in the theater. Me and Orson Welles is a breezy, insightful, laugh-out-loud funny love letter to a golden age in American entertainment.

I cannot WAIT to see this movie!! The last time I checked it opens in NY and LA over Thanksgiving, and then wide release December 11th. I just hope those dates don't change (unless they move the wide release opening up...I would totally go for that). ;-)
Posted by Unknown at 3:37 PM

That book sounds really awesome! I have to see if it my library has it now. :)

@heidenkind - I think you would really enjoy this book - hope you get a chance to read it before the movie comes out! We must discuss! :)