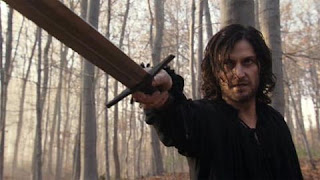 Weeelllll, this was an interesting episode of Robin Hood. As the title implies, "Bad Blood" delves into Robin (Jonas Armstrong) and Guy's (Richard Armitage) complicated past. Let me get the best point of this storyline out of the way first - Guy and Robin are together at last, and they are the only members of the regular cast to appear in this episode. Hip, hip, hooray! Now let me get out a major gripe...after two and a half years of watching this show, all of a sudden Robin and Guy HAVE a past? They grew up together?! WHAT THE HECK?? Robin and Isabella never even let on that they previously knew each other at earlier in this season. Talk about pathetic storyboarding. This really drives home the biggest problem with the show this season - lack of focus. The Black Knights storyline in season 2 really gave the entire season focus and purpose, and the results were glorious. *sigh* I'm apt to get all choked up remembering the good ol' days... ;-)

Apparently Robin's widower father Malcolm, played by Dean Lennox Kelly, and Guy's thought-to-be widowed mother Ghislaine, played by Sophie Winkleman, started having an affair resulting in a pregnancy (more on that later). Kelly is a very familiar face to obsessive viewers of British TV like myself. :) He's appeared as Puck in ShakespeaRe-Told, Shakespeare in a Doctor Who episode, Cranford series 1, Being Human, and most recently in the fantastic Collision. Sophie Winkleman looked very familiar but she's only played in a handful of projects that I recognized: the "Five Little Pigs" Poirot episode, an episode of Inspector Lewis, and as the older Susan at the very end of the first Narnia film. I didn't recognize Guy's father at all so he's not worth talking about. LOL!

However, the return of Guy's father from the Crusades throws a crimp into Malcom & Ghislaine's plans, especially since he returns infected with leprosy and cannot possibly cover for the birth of their illegitimate child. And now to talk about this kid for a second...I know the show's already been canceled and all, but I cannot believe this is the direction the showrunners chose to go after the announcement at the end of season 2 that Jonas Armstrong was leaving the show. This would've been a PERFECT opportunity to turn Guy into the hero all of us Richard Armitage fans know he could've been. It would've been fantastic, a freaking dream come true. But NOOOOO, we to go the route of creating a third random person, mashing up the best qualities of Armstrong and Armitage (it's arguable that that's even possible, but whatever...LOL!). And to add insult to injury, this random Robin/Guy sibling is named ARCHER. That has to be some of the worst telegraphing EVER. *sigh*

It was marginally intersting to see youngish versions of Robin and Guy. However, what was with the selective recreation of their childhoods? Where were kid versions of Marian and Will? Why wasn't Little John living in the village in his pre-outlaw days? That's too much to ask for, obviously. *sigh again* Kid Robin was a jerk, it is easy to see where his need for a hero complex comes from. And kid Guy was quite a brooder back in the day, wasn't he? No shocker but I had much more sympathy for Guy's tortured past than Robin's, LOL! ;-)

So the episode ends with Robin and Guy going off to rescue their previously unknown brother. Oh, before I forget - the whole Robin's dead father suddenly reappearing thing - and the whole leprosy angle in general - that type of storyline just felt wasted. It's been done better before but what can I expect when the writers just decide to spring this kind of thing on the viewers? *sigh for the millionth time* The best thing about this episode was seeing Robin and Guy come to terms with each other and unite with a common purpose. That's been a long time coming, hasn't it?
Posted by Unknown at 1:53 PM

I liked this episode a lot when I saw it and I thought it came just to confirm my impression that those two (G & R) had already met in their past and their troubled conflictual relationship had old roots.I wrote about my sympathy for Guy at the end of series 3...but ... you've still got 3 episodes to go so, you'd better not read my posts before you've finished watching.
Anyhow, I totally agree with you: Series two was the best.

@Maria - I guess I just wish there had been a bit more of an indication of G&R's collective past earlier in the show. For me, it seemed like an afterthought - even though, as you point out, it's highly probable given their enmity.