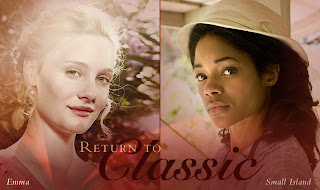 Oh happy day. :) The Masterpiece Classic schedule was released today, and all things considered I have to say I'm quite pleased and excited by the line up. Take a look:

December 20, 2009-January 3, 2010, 9pm
Cranford (Encore Presentation)
Three episodes (Episode one 120 minutes; episode two 60 minutes; episode three 120 minutes)
The Emmy-nominated drama about a small English village in 1842 on the brink of change — where some find romance and opportunity, and others fear the breakdown of social order.

January 10-17, 2010, 9pm
Return to Cranford
(Two 90-minute episodes)
The construction of a new railroad line is at once thrilling and threatening to the residents of Cranford. This sequel stars Judi Dench, Imelda Staunton and Julia McKenzie. New faces include Jonathan Pryce and Tim Curry.

February 14, 2010, 9pm
Northanger Abbey (Encore Presentation)
One 90-minute episode
In a medieval house that appeals to her most lurid fantasies, romance addict Catherine Moreland (Felicity Jones) begins a relationship with the younger son of the estate in this adaptation of the Jane Austen novel.

February 28, 2010, 9pm
The 39 Steps
One 90-minute episodeSecret agent Richard Hannay battles German spies on the eve of World War I in a riveting and romantic new version of the thriller by John Buchan. Rupert-Penry Jones (Persuasion) stars as Hannay.

April 4, 2010, 9pm
Sharpe's Peril
One 120-minute episode
The adventures of Colonel Richard Sharpe continue as he leads a ragtag party of civilians and soldiers on a march across India, with the murderous army of an opium lord in hot pursuit.

April 18-25, 2010, 9pm
Small Island
Two 90-minute episodes
When an ambitious Jamaican woman moves to gritty post-war London, she finds that the "Mother Country" is not the land of opportunity she had imagined. Starring Naomie Harries, Ruth Wilson and Benedict Cumberbatch.

You can watch a short preview of the new season here.

I realize I've already mentioned once or twice (HA!) that I'm looking forward to Return to Cranford and the new Emma (seriously, can not WAIT to see Jonny Lee Miller as Mr. Knightley!). If you've never seen the first Cranford miniseries, be sure to take advantage of the encore presentation in a few weeks if it airs in your market.

I could've lived without the other Jane Austen encores, because 1) I have the DVDs and 2) I have an insatiable hunger for new British programs, but if you've never seen them they're definitely worth checking out. On the other hand, I'm positively thrilled at the inclusion of two World War II-era programs. I'm REALLY looking forward to checking out the new version of The 39 Steps starring the yummy Rupert Penry-Jones (if you've never seen the classic Alfred Hitchcock film version of this story, I have to recommend it as well - though my guess is TCM will probably schedule a showing around the time this new version debuts on PBS), and I vaguely recall hearing some pretty good things about the new version of the Anne Frank story. The Sharpe movies can be diverting, but frankly this is like Sean Bean's 500 millionth turn as Sharpe and he (and the series) is getting a little long in the tooth IMO. But whatever, like I said, will most likely be entertaining in some respect, if only to try and spot other British talent in guest star spots. However, I've got to end by saying I'm really looking forward to the final program of the season, Small Island. I read a bit about it a couple of months ago at the BBC press office, and the story sounds fascinating, and you can't beat the cast - Benedict Cumberbatch, Ruth Wilson, and Naomie Harris.

All in all, this is a season not to be missed, and you can be sure that it will be well blogged about here. :)
Posted by Unknown at 5:57 PM

Ruth, bless you bunches! I was just telling my husband I don't have a clue when these were on but wished I knew:) So there!

The 39 Steps and Richard Sharpe programs look promising. :) I am the most excited for Emma, though.

Thank you for the schedule! I'll definitely be tuning in for "Return to Cranford" & the new "Emma." (Those are the 2 I'm most anxious to see as well.)

Thank you so much for this. Some of these look very promising. Good stuff. And I'm glad to see Benedict Cumberbatch in a new role. I'm sure he's done something since Amazing Grace, but I haven't seen it.

Emma had better live up to all of our expectations. :)

@Lori - Benedict Cumberbatch has made a few Masterpiece appearances since Amazing Grace. He starred in The Last Enemy, which I confess I never watched, but my parents did & really enjoyed it. He also appeared in a Marple episode this summer (Murder Is Easy), but I think he was a trifle under-used, and for my money it wasn't one of the strongest Marple eps. My review is on this blog if you click his name or the Masterpiece Mystery tag to the right.

you have a nice looking blog.
God Bless You

"Small Island" was recently shown on the BBC here, but I missed it. Ruth Wilson's in it! :)

"Persuasion" I didn't like at all, "Emma" was so-so. "Northanger Abbey" was okay (with Carey Mulligan and seriously gorgeous Mark Dymond, squee!).

What I really would recommend is "Sharpe's Challenge". The other one, who cares, but this one not only has Sean Bean... it has TOBY STEPHENS! As a baddie! And he's super hot in the role to boot! That he was in it was my cue to watch it, and it's a decent story and all, but OMG, Toby Stephens as William Dodd!! Makes it all worthwhile, even if he's not in it as much as one would've hoped!

@Traxy - Ruth Wilson's presence is one of the main reasons I'm interested in Small Island. If you get to watch it before it airs over here, let me know what you think.

I will acknowledge that the latest Persusaion has issues, but I enjoy it. Very curious about how I'll take Emma, and Northanger was fun (but I think part of the reason I enjoyed it and accepted it "as is" was because it's the one Austen tale that really hasn't been done to death, know what I mean?).

Toby Stephens in Sharpe's Challenge was the main reason I watched that show when it aired on BBC America. Sadly though you are right, he's not in the show NEARLY enough!!!

He said something about that in the behind the scenes show... that you want to keep the mystery with the baddie, so that's why he's not shown that much. He should've been, he was FANTABULOUS! The bathtub scene was pretty hot, and he didn't even untie his cravat.

I've only seen one version of "Northanger Abbey" and haven't read the book, but then again, same with "Mansfield Park" and that was enjoyable too. "Persuasion" is the only Austen adaptation I've watched where I've wondered what's up. In a "but this is Austen... Austen is always great, so why is this so dreadful and unenjoyable?" way. Then I saw the 1995 version, and my faith in Austen was restored. Hmm. I'll look up where I put that review and re-post it in the blog.

@Traxy - I confess I'm the exception to the rule when it comes to the 1995 Persuasion. I can't stay awake through it, the thing bores me to tears.