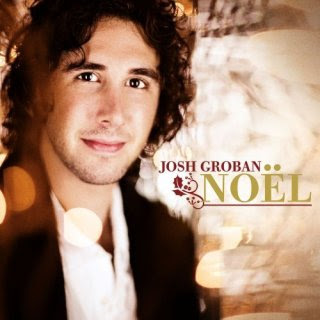 I originally reviewed this modern Christmas classic in November 2007. It's become one of my Christmas favorites. If you have yet to check this one out, maybe this encore of my review will convince you. ;-)

Noel is the type of Christmas album Josh Groban’s fans have been hoping for ever since he burst on to the music scene in 2001 with his self-titled debut. The following year teased fans with the release of a gorgeous, classical rendering of “O Holy Night” – a bonus track on his Josh Groban In Concert DVD/CD package. It’s been a five year wait since then for a full Christmas album, but Noel proves it’s been worth the wait. It’s chock-full of Christmas classics, and thanks to production by David Foster, each song is now stamped with Groban’s signature sound – lush, orchestral arrangements that perfectly frame his exquisite vocals. What sets apart so many of the recordings of familiar carols on Noel from the countless other versions out there is the smart pop sensibility woven throughout many of the arrangements. While the songs feel familiar the arrangements are fresh and there are new melodic hooks that set Groban’s performances apart from the vast slew of Christmas music that’s available. For example, “Little Drummer Boy,” featuring guitarist Andy McKee, is one of the standout tracks on the album. It’s transformed from a sweet carol into a soaring pop anthem with a stirring penny whistle solo that lends it a Celtic feel (somewhat reminiscent of “You Raise Me Up”). Similar to this is “What Child Is This?,” where the lilting rhythm of the music turns it into pure ear candy. “It Came Upon a Midnight Clear,” featuring Josh on the piano, is beautiful in it’s simplicity which How one views “I’ll Be Home for Christmas” depends on your tolerance for songs containing dialogue. Here, Groban’s exquisite reading of the lyric is interspersed with Christmas greetings from soldiers stationed overseas. The combination recalls the song’s origins as a World War II anthem of hope, and when you keep in mind the historical context of the song and listen to the heartfelt messages from soldiers today, the effect is incredibly moving. (And I’m not biased just because one of the solders is a friend of mine. ) The one original song on the album is “Thankful,” a lovely David Foster-Carol Bayer Sager ballad about remembering in the midst of the craziness of life to be thankful for the blessings in our lives. Only time will tell if this song will become a holiday classic like the Foster-penned “My Grown-Up Christmas List,” but the potential is there. Groban duets with Brian McKnight on laid-back, guitar driven version of “Angels We Have Heard On High” – McKnight’s smooth voice provides a nice counterpoint to Groban’s more robust baritone – it’s a nice juxtaposition of vocal styles. He also sings “The First Noel” with Faith Hill. I’m a huge Hill fan but she sounds a tad hoarse here, and one gets the sense singing opposite Groban really pushed her a bit beyond the range she sounds most comfortable singing. I would’ve preferred to hear Groban sing with the likes of Carrie Underwood on this track instead – she has a crystalline purity to her voice that would’ve been a gorgeous foil to Groban’s vocal. The disc closes with a stunner – “O Come All Ye Faithful,” featuring the Mormon Tabernacle Choir, where Groban unleashes the full power of his voice and soars. Noel is an instant Christmas classic, thanks to Groban’s magnificent voice, timeless songs, and fresh arrangements that play to Groban’s strengths as a vocalist and while breathing fresh life into beloved Christmas music.
Posted by Unknown at 3:42 PM

Ohmygosh...this is my FAVORITE Christmas CD of all time...but then again I <3 Josh Groban so that's not a shock! The only thing that I wish this CD had was Believe from The Polar Express and O Holy Night (that you mentioned in your post)! O Holy Night has got to be my favorite of all Josh's Christmas songs! I got my version from Target when it first came out so I did get the bonus DVD that came with it. I just watched it last week...Josh is so cute!

Thanks for sharing your opinion on Noel!!!

I do have yet to listen to this, but I've heard so many great things about it. Plus I loved Groben in Chess, so I might check it out. :)

I really wish Michael Buble would release a holiday CD.

@Renee - It would be nice if Noel was a "complete" Christmas album, but at least we have or can download the other songs. Fun fact...the first soldier to give a greeting on "I'll Be Home For Christmas" is an old friend of mine. Patrick is married to my dear friend Courtney, who just happens to work for Josh's producer.

@heidenkind - You and me both on the Michael Buble thing. That holiday EP he released several years ago just isn't sufficient. I mean that was only like 5 songs!!

I heart that man's voice. I'm not a big Christmas music fan, but have already played NOEL... at least once.