Review: Silent in the Sanctuary by Deanna Raybourn 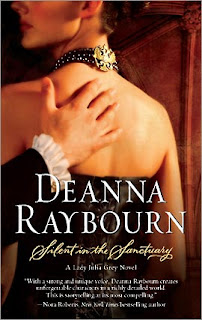 Fresh from a six-month sojourn in Italy, Lady Julia returns home to Sussex to find her father’s estate crowded with family and friends. Much to her surprise, the one man she had hoped to forget – the enigmatic and compelling Nicholas Brisbane – is among her father’s houseguests…and he is not alone. Not to be outdone, Julia shows him that two can play at flirtation and promptly introduces him to her devoted, younger, titled Italian count.

But the homecoming celebrations quickly take a ghastly turn when one of the guests is found brutally murdered in the chapel. Lady Julia resumes her unlikely and deliciously intriguing partnership with Nicholas Brisbane, setting out to unravel a tangle of deceit before the killer can strike again.

Deanna Raybourn suffers from no sophomore slump with her second Lady Julia Grey novel, Silent in the Sanctuary. This thoroughly engrossing, humorous sequel ranks even higher in my view than its predecessor, Silent in the Grave (which I absolutely loved!). Lady Julia’s second foray into the world of detection and mystery is just as un-put-downable as the first, and I was compelled to carry it with me everywhere until I finished it. This time, Raybourn gives readers a stronger, more self-assured Lady Julia, though she’s still learning to balance between societal expectations and her own new appreciation of independence, and an even more compelling, wonderfully and frustrating enigmatic Brisbane. When the two are reunited even more sparks fly, and you could cut the romantic tension with a knife, it’s that palpable. But of course nothing is going to come easy for two individuals whose strong wills and temperaments constantly put them at odds with convention and each other.

Following her brush with death in Grave, Lady Julia went to Italy to recover her health, and though she’s reluctant to admit it to herself, to forget inquiry agent Nicholas Brisbane. Though the connection between them is undeniable, when six months pass with nary a word she resolves to move on. When she and two of her brothers are recalled to the family estate for Christmas, she’s shocked and somewhat peeved to discover that Nicholas is in residence as well – with a completely unsuitable fiancée. However, her annoyance is pre-empted by the brutal murder of one of the houseguests, and her father charges her and Brisbane to work together to discover the culprit and minimize the scandal’s impact on the eccentric March family. Isolated by a snowstorm in the historic Abbey/family home, the pool of suspects is limited, casting a pall of suspicion over family, friends, and acquaintances alike. The truth must out before the snow melts, allowing a murderer to go free – or they may strike again.

One of this book’s greatest strengths is that Raybourn allows readers to spend more time with Julia’s delightfully eccentric family. They’re funny, sarcastic, irreverent, and fiercely loyal to each other, even the more questionable of their relations (like Aunt Dorcas, the ancient kleptomaniac). Sanctuary is rife with as much intrigue, misunderstandings, and hidden secrets as its predecessor. The storyline is multi-layered and fascinating, with enough twists and turns and red herrings to give a person whiplash. The fact that the family home was once an ancient Abbey adds to the atmosphere of the story – it’s as though anything is possible in a location where the very stones seem imbued with history and drama. At the center of it all lies Brisbane and Julia’s maddening relationship. Their relationship is like the ebb and flow of an intricate dance – just when events throw them together, something tears them apart. Raybourn excels at developing the romantic tension in this installment. Lady Julia’s world is one I love getting lost in – completely and utterly absorbing, and loads of fun to boot, Raybourn’s storytelling always leaves me wanting more.

So, in the comments section of my review of Silent in the Grave, there was some fun discussion about who should play Nicholas Brisbane, should this series ever be filmed. I bring you two other actors for your consideration:

First, Tom Hardy as Heathcliff in the 2009 version of Wuthering Heights. I honestly don't know why I didn't think of him first, as I am a big fan of his performance here. An added bonus in his favor is that Heathcliff and Brisbane share a very similar heritage...and that's all I'm gonna say about that. ;-) 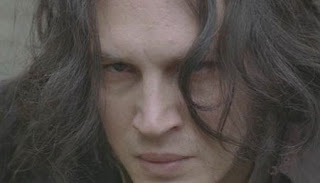 My second choice today is the absolutely fabulous Richard Armitage. *swoon* I think Richard is a smidge too...hmm, aristocratic in his looks to perfectly fit the role of Brisbane as he's described in the novels. HOWEVER...Armitage's turn as Guy of Gisborne proved that he's a master at playing a dark, tortured, compelling leading man. If he played Brisbane on screen, I have no doubt he'd own the role. Happy thought. :) 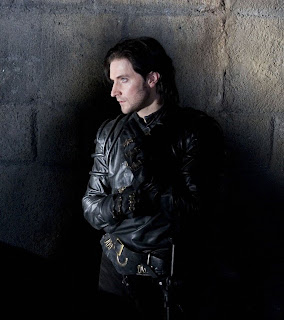 So, to anyone who's read the books, please chime in with your opinion. Or, based on my reviews, which actor would you most like to see in the role?
*I have to say, while I don't like these "new" covers nearly as much as the first run designs for book one, I do appreciate how the cover artist nailed Julia's grey pearls - the necklace is exactly as described.
Posted by Unknown at 3:33 PM

I enjoyed this book too. I am not sure which one to play him. I am not really a movie buff. lol :)

LOL even though I've never read these books I'd cast RA to play any hero *sigh* Thanks for the review, this series sounds really cool!

@heidenkind - Yes, they do - is that a delicious little teaser or what? *wink* I really do hope you read these books someday, I'd love to hear your thoughts!

@Brittanie - I am just blown away by Raybourn's books & how I get completely sucked into the story & the characters' lives. So glad there's another book coming out in March (I think). After that I'll be going through withdrawals...

@Renee - Yeah, it is hard to not favor RA, isn't it? *wink* I'm loving the books, hope you get to read them someday. Though if your TBR pile is like mine...well, I don't think I'll ever catch up (can't even fathom what that would mean, LOL!).