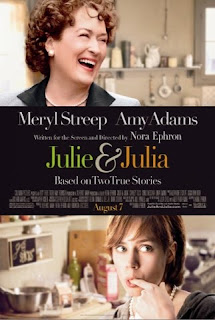 This is going to be relatively short since I watched this last week and never got around to blogging about it in a timely fashion. If you’re like me and maybe weren’t in the mood to blow $10 on a theater ticket when Julie & Julia was around, I recommend renting the film now that it’s on DVD. I really liked it. I absolutely loved 50% of the movie, the other 50% was just a little mehhh. But that's not a bad thing necessarily, just trying to be honest about my take on it. As I’m sure everyone knows from the film’s trailers, the movie is based on two true stories – Julia Child’s life in France and how she came to author her famous cookbook (and became, you know, Julia Child for goodness’ sake!), and Julie Powell, a dissatisfied cubicle worker who sets for herself the challenge of cooking through Child’s cookbook in one year and blogging about it. First off, I have to say I really admire Julie’s ability to set her goal and stick with it. Me? I’m lucky to still be blogging after all these years. But as for joining all of those fun and unique challenges that crop up in the blogosphere – well you can forget about that. My percent of successfully completed blogging challenges is woefully low.

Anyways, this film does quite a masterful job of interweaving Julie and Julia’s respective journeys. Though the two women are separated by time and wildly varied circumstances, their stories are remarkably similar. I suppose if you boil it down, the creative outlet of cooking provided the impetus for both women to find a renewed passion and focus for their lives. It’s here that I have to admit that I just wasn’t all about the Julie storyline. Amy Adams was her usual sweet self here, and while I really enjoyed her performances in films like Miss Pettigrew Lives for a Day and Enchanted, she just didn’t do much for me here. Maybe it’s because I just don’t buy her portrayal of the combination of saccharine-sweet yet borderline bitterly dissatisfied wife & cubicle worker? I don’t think it was the character necessarily; more that I just didn’t really connect with Adams in this specific role. Not that she was bad, but I just didn’t really care about her one way or the other. When the moment comes when Julie discovers that Julia knows about her blogging venture and doesn't approve, and with a DEADLY SERIOUS look on her face she asks her husband if it's because she "occasionally uses the f-word," it's absolutely laughable. Because NOTHING in Adams's portrayal of hints at that. I know that's a trivial thing, probably, but it took me out of the film, you know?

Now the Julia portion of the story – that, my friends, was fantastic. I’ve never been what you might consider a huge Meryl Streep fan, but oh my WORD, she was wonderful as Julia Child. Every scene that showed Julia’s story, every scene that showcased Paris, made me want to live in that world. It was breath-taking and wonderful. I loved every single thing about those scenes. Not only was it a fascinating glimpse into Julia Child’s life before she became the Julia Child and unleashed that juggernaut of a cookbook on the world, but it was also a refreshing, sweet look at the Childs’ marriage. Stanley Tucci did an excellent job opposite Streep playing Paul, Julia's husband. The film offers some nice glimpses into his character & work, but the real jewel of his presence in the film is seeing Paul and Julia's devotion to each other play out on screen. It's got to be one of the most refreshing, positive portrayals of a "seasoned" marriage that I've seen in the movies in I don't know, ages. Love, love, loved everything about their relationship. In fact those scenes were so good, so absorbing to watch for me everything else paled in comparison. I rather wish the entire movie had been a Julia biopic. Oh well, c'est la vie. ;-)

Julie & Julia has all the hallmarks of a Nora Ephron film - sweet, romantic, and funny. I thought she did an excellent job navigating between Julia & Julie's worlds, particularly, of course, in bringing mid-20th century Paris to life. I've also got to mention Alexandre Desplat's absolutely lovely work on the film's score. It's light, airy, and gorgeous. Oh, and I seriously hope Streep is nominated for an Oscar for her work here, it's just that good IMO. This is definitely a movie I'll enjoy watching again & again, but perhaps the biggest thing I can thank this film for is that I now want to learn more about Julia Child's life. Off to track down a copy of her memoir... :)
Posted by Unknown at 7:58 PM

I just watched this movie today. I don't think I'll want to watch it again and again, but it did make me want to read My Life in France. The Julia and Paul scenes in Paris were very appealing. I also loved the scenes with Julia and her even taller, sister. I'm giving someone the new cookbook, Gourmet Today, for Christmas. It's over 1,000 pages long. I hope they don't decide to cook everything and blog about it.

Yeah, I couldn't see spending money to see it in a movie theater, either. But it looks like a fun rental. :)

@LKE - Thanks for stopping by the blog and commenting! I actually ordered a copy of My Life in France yesterday, completely inspired to read it by this movie. I'm sure a review will appear on the blog sooner or later. :) And you never know what you may be inspiring with your cookbook gift!

@heidenkind - It's most definitely a worthwhile rental, hope you enjoy it!

Hoping to see this movie this Friday evening. So many have recommended it, I'm sure I'll love it. Great review!

@Lori - Thanks! Come back & let me know how you like the movie!

I'm with you. I LOVED the Julia part! Her performance was amazing! Top notch.

@Juju - Thanks! The Julia story was amazing - her book is sitting on my TBR pile. :)