Review: A Lovely Way to Spend Christmas by Kristin Chenoweth 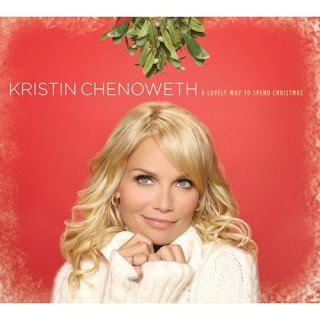 The last of my encore Christmas music reviews is from one of my all-time favorite vocalists, the fabulous, amazing Kristin Chenoweth. I originally reviewed this album in November 2008.

A Lovely Way to Spend Christmas is Kristin Chenoweth's third full-length studio album (following 2005's As I Am and 2001's Let Yourself Go). While she's been one of my favorite vocalists since her debut, her second disc fell a bit short. Let Yourself Go is a classic concept album - it flows perfectly, the entire disc a throwback to the 1930s big band sound, seamlessly blending classics with new songs. As I Am by comparison was more hit-or-miss. While Kristin's voice shines (most notably on my favorite, "Taylor, the Latte Boy"), the album lacks a cohesive style, running the gamut from country to Broadway to pop. Thankfully, A Lovely Way to Spend Christmas is a classic Christmas album from the first track to the last. The song selections and arrangements perfectly frame Chenoweth's soaring, sparkling voice. She covers many of the classics here, like her rich, emotional delivery of "I'll Be Home for Christmas" and the classically influenced "Do You Hear What I Hear?" and "What Child Is This?". There's also lesser-known gems like "The Christmas Waltz" and "Christmas Island." The latter is the only "novelty" song on the album, but Kristin makes the song her own and turns it nto a showcase for the spunky and comic side of her personality. "Sing," "Silver Bells," and "Come On Ring Those Bells" have the pop-country feel that Chenoweth introduced on her second album, recalling her Oklahoma roots. "Sleigh Ride/Marshmallow World" is a fun, jazzy duet with John Pizzarelli - his laid-back vocal is a great counterpoint to Kristin's high energy delivery. The disc closes with the stunning, perfectly paired "Sleep Well Little Children/What a Wonderful World" where the richness and depth of Kristin's voice is on full display. A Lovely Way to Spend Christmas is an instant holiday classic. Kristin's so crystalline voice is so good here I'll be hard pressed not to listen to this album year-round.

I heard Chenowith sing on Pushing Daisies but I had no idea that she'd released a Christmas album!

@heidenkind - Isn't her voice awesome? I just love her music!