I've always loved reading, history, and horses. These things come together in several of my historical books. My young adult novel, Sarah's Long Ride, also spotlights horses and the rugged sport of endurance riding, as does the contemporary romance Trail to Justice. I took a vocational course in horseshoeing after earning a bachelor's degree in history. I don't shoe horses anymore, but the experience has come in handy in writing my books.

Another longtime hobby of mine is genealogy, which has led me down many fascinating paths. I'm proud to be a DAR member! Some of Jim's and my quirkier ancestors have inspired fictional characters

For many years I worked for the Central Maine Morning Sentinel as a freelancer, covering local government, school board meetings, business news, fires, auto accidents, and other local events, including a murder trial. I've also written many profiles and features for the newspaper and its special sections. This experience was a great help in developing fictional characters and writing realistic scenes. I also published nonfiction articles in several magazines and had several short stories appear in Woman's World, Grit, and Alfred Hitchcock's Mystery Magazine.

My husband, Jim, and I moved to his birth state, Oregon, for a while after we were married, but decided to move back to Maine and be near my family. We're so glad we did. It allowed our six children to grow up feeling close to their cousins and grandparents, and some of Jim's family have even moved to Maine! 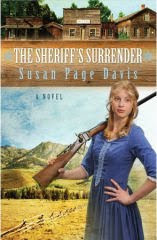 Gert Dooley can shoot the tail feathers off a jay at a hundred yards, but she wants Ethan Chapman to see she's more than a crack shot with a firearm. When the sheriff of Fergus, Idaho, is murdered and Ethan is named his replacement, Gert decides she has to do whatever she can to help him protect the citizenry. So she starts the Ladies Shooting Club. But when one of their numbers is murdered, these ladies are called on for more than target shooting and praying. Can Gert and the ladies of Fergus find the murderer before he strikes again?

If you would like to read the first chapter of The Sheriff’s Surrender , go HERE
Posted by Unknown at 6:37 PM