Miss Marple: They Do It With Mirrors 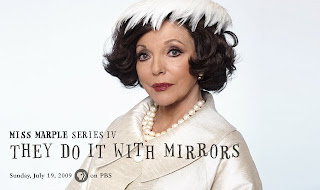 Miss Marple and PBS's run of six Agatha Christie adaptations concluded this Sunday on Masterpiece Mystery, and due to a variety of reasons I am once again, way behind in blogging. :P They Do It With Mirrors was the third entry in this series, and I thoroughly enjoyed it. Here's the story summary from the PBS website:

Glamorous Ruth Van Rydock (Joan Collins) is convinced her sister Carrie Louise is in danger, and confesses her suspicion to Miss Marple over tea. Carrie Louise, a quirky philanthropist with a string of ex-husbands, runs a correctional facility for young men on her estate. Miss Marple arrives to make some gentle inquiries and finds chilling danger lurking surprisingly close to home. When murder is the real-life plot twist during an amateur theater rehearsal on the estate, Miss Marple has to separate theatrical tricks from reality in an attempt to save Carrie Louise from the dire final act that awaits her.

Of the three episodes shown so far in this series, this one is by far the best showcase for Julia McKenzie's take on the role of Miss Marple. She's prominently featured throughout the film, and it's this performance that's finally, fully won me over into the ranks of McKenzie-Marple fans. Here McKenzie manages to be sharp and intuitive all while coming across as extremely warm and personable. Very well done. :)

The "stunt" casting is pretty spectacular for one hour and a half program. Let's start with the Rydock sisters, the flashy Ruth (Joan Collins) and the shy, universally loved Carrie Louise (Penelope Wilton). I haven't finished reading the novel yet (which is an actual Marple story BTW), but I can tell you that Joan Collins was pitch-perfect casting for the role of Ruth. It's uncanny. Penelope Wilton is a veteran of several of my favorite British programs and films. She played Mrs. Hamley in Wives and Daughters (a role quite similar to Carrie Louise), Mrs. Gardiner in the 2005 Pride and Prejudice, and Harriet Jones, former British Prime Minister, in Doctor Who. Carrie's husband is played by Brian Cox, most recently seen in the FREAKING FANTASTIC series Kings as Silas's prisoner, King Vesper. I will have to do a write up on that show when the DVDs come out in September - it was a wonderful drama that really deserved a second season renewal (if renewals were based on quality merits anyway).

Carrie's daughters are played by Emma Griffiths Malin (Gina), who starred opposite JJ Feild in the Poirot mystery Death On the Nile, and Sarah Smart (Mildred), who was also a Poirot alum. She appeared in the mess that was Mrs. McGinty's Dead a few weeks ago, as well as the AMAZING Wallander, where she played Anne-Britt Hoglund, a member of Wallander's team. To round out the household we have Tom Payne appearing as Edgar Lawson - he was also seen in Miss Pettigrew Lives for a Day as the producer Phil Goldman and the most recent version of Wuthering Heights as Heathcliff's son Linton. Maxine Peake plays Jolly Bellever, Carrie's friend and housekeeper, and also a Little Dorrit alum. It was so very, very weird seeing her play a "good" character after she made such an impression as the wicked Miss Wade. Oh - thought not a member of the household, I have to mention Alex Jennings's portrayal of Inspector Curry. So far from my reading of the book he's nailed the character. Jennings may look familiar to fans of Cranford, where he played the Reverend Hutton.

My favorite bit of casting deserves its own paragraph. :) Elliot Cowan plays Gina's husband Wally, and AMERICAN, and I have to say this Brit pulls off the role of former American G.I. quite well. I absolutely fell in love with Cowan when I saw Lost in Austen, where he put his own unique stamp on the role of Mr. Darcy (the man broods quite nicely, just have to point that out). Cowan's also appeared in episodes of Foyle's War, Poirot, and the first (and best) Sally Lockhart mystery, The Ruby in the Smoke. The man's got a rather uncanny ability for disappearing in roles, all the more unique I think because he's really got rather striking features IMO. I had to do a double take when he first appeared on-screen (thank goodness for pausing & rewinding live TV, HA!), because it was so hard to wrap my head around his appearance as a blonde American. Love, loved the fact that he got a great kissing scene at the end of this episode. :)

This film is a great example of the Marple series at its best, and an excellent showcase of all the reasons I love the program - great cozy mystery feel and TONS of wonderful guest stars. The story takes a bit of attention to follow - it's one of Christie's more convoluted plots IMO. I think it's a bit easier to keep track of how everyone is related to everyone else in the novel - a bit hard to follow on-screen, especially since some roles are compressed or omitted for the sake of time. My review of the book and the book vs. film comparison will follow shortly!
Posted by Unknown at 2:57 PM

I like this ep. It was a little confuzzling, but you had to know none of the inmates were the killer, because that would be toooo obvious. I totally missed the fact that the guy who played the American was Cowen! Good call on that one. :)

I loved the crazy secretary character--the one who turned out to be the murderer's son. Very cute, but psycho. :P