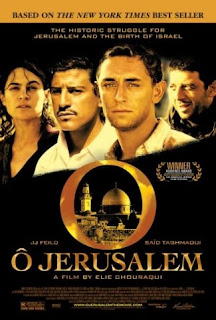 I discovered a little gem of a film this week – O Jerusalem starring one of my favorite up-and-coming actors, JJ Feild (The Ruby in the Smoke, Northanger Abbey). I haven't been able to stop thinking about this film since I watched it. Based on the book of the same name by Larry Collins and Dominique Lapierre, it's an account of the events surrounding the birth of the State of Israel following the U.N. mandate to partition Palestine in 1947. The film takes some license and using the historical fact presented within the book tells the story of Bobby Goldman (JJ Feild), an American Jew and World War II veteran, and Said Chahine (Said Taghmaoui), a Palestinian Arab, who meet in New York and become fast friends in spite of their different backgrounds, views, and the antagonism brewing between their respective cultures halfway across the world. With the vote on the partition pending and the withdrawal of the British occupation imminent, Said’s family calls him to Jerusalem and Bobby follows given his own long-standing interest in the establishment of a Jewish homeland.

The transition from America to Palestine, and what that means for Bobby and Said’s friendship, is both fascinating and heartbreaking to watch play out. America is a “safe” ground where they can debate and vehemently disagree with each other, but friendship always trumps their differences. However, once they arrive in Palestine and are confronted with the reality of the simmering, primed to explode conflict, it’s crushing to see what that does to their friendship. As Said’s mother tells Bobby when he first arrives, for years many Arabs coexisted peacefully with their Jewish neighbors – each honoring the other’s holidays, etc. But in the aftermath of the Nazi attempt to wipe out the Jews, and with partition looming, battle lines are drawn, forcing tension between former friends and neighbors. 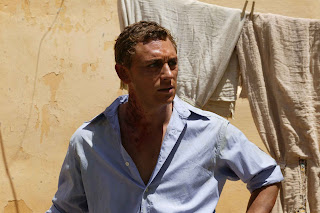 JJ Feild as Bobby Goldman
O Jerusalem makes an excellent companion film to Exodus, which stars Paul Newman and is based on the novel by Leon Uris (one of my all-time favorite movies, an absolute classic), since the timelines overlap. That movie also features an Arab-Jewish friendship that is tested and ultimately sacrificed to the conflict. It’s also interesting to compare the way each film portrays the Jewish resistance fighters (the Irgun, the more extremist terror group, and the Haganah, the more moderate, government-sanctioned fighting force). O Jerusalem probably does an even better job that its predecessor of giving equal screen time to both the Jewish and Arab perspectives. No one side is portrayed as fully right or wrong; rather, each culture’s belief in their respective cause is compellingly portrayed. 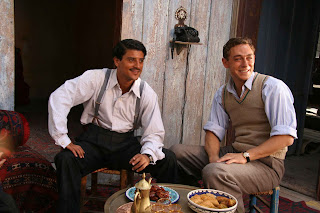 Taghmaoui and Feild as Said and Bobby
The film has an almost documentary feel to it, and that style brings both pros and cons. The scene editing is fast and choppy but that only serves to enhance the raw intensity of the events unfolding onscreen, the effect aided by the black and white newsreel footage inserted throughout the film. The documentary style of the film also translates into a lack of character development overall. Bobby and Said are the only characters you really get to know and feel for - but that focus, in this case anyway, really works. I was also extremely impressed with Stephen Endelman’s score. He never went for bombastic action cues, more often than not it was the softer pieces played over or in the aftermath of action sequences that tugged at the heartstrings and upped the emotional impact of the scenes. According to the movie’s IMDB page, it was filmed in Liverpool and Rhodes, and that considered I was very impressed with the location shots which appeared quite authentic – there was apparently some nice attention to detail at work throughout the production. 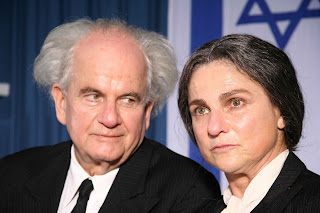 Ian Holm as Ben Gurion (looks a little crazy, no?) and Tovah Feldshuh as Golda Meir
One could argue that the way Bobby and Said keep encountering each other as enemies in the field is contrived, however, I appreciated the way their encounters kept the enormous cost of the fighting at the emotional forefront of the film. These are the characters we really get to know, witnessing every fateful decision, the tremendous cost that the fight over partition exacts on their lives. That’s where the hope lies, in viewing their struggles – and this film does end on a hopeful note (though I would have preferred going without Feild’s voiceover drumming the point home – the actions of the characters speak for themselves in my view). Despite multiple opportunities on each side, when it came right down to it, Bobby and Said could not kill each other. That’s the crux of why I found this movie to be so powerful – at its heart it’s not about nations or politicians, it’s about the choices made by average, everyday people on the ground caught up in events beyond their control. It's about the cyclical, consuming nature of violence, and how terrifyingly "easy" it is to get caught in that cycle. Because if any real change is going to happen, it’s not going to come about as the result of some government mandate to fight or keep the peace – a heart change is required. Seeing the ways in which Bobby and Said honor their friendship, even after both suffer through fighting and horrific losses, is a powerful reminder of how, though the trappings may differ, there is a universality to the human experience that *should* foster compassion and understanding, if only those traits are allowed room to grow.
“If I forget thee, O Jerusalem, let my right hand forget her cunning. If I do not remember thee, let my tongue cleave to the roof of my mouth; if I prefer not Jerusalem above my chief joy.” (Psalm 137: 5-6 KJV)
Posted by Unknown at 6:34 PM