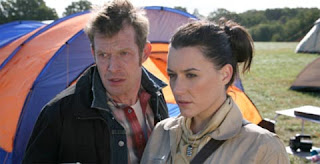 Spoilers...
I can not believe that this is the next-to-last episode of Primeval. There were several moments in this episode that were absolutely fantastic, starting with all of the "Do Not" do this and that signs that Lester (Ben Miller) put up all over his apartment to keep Connor (Andrew Lee Potts) from wrecking his pristine place. The "caution" tape keeping Connor's stuff crammed in a small area of the living room was the icing on the cake. HILARIOUS! I am telling you, there is a whole unexplored concept for a TV show in the whole Lester-Connor situation.

As I talked about in my write-up of episode 8, since the show is ending I am so freaking happy that Connor and Abby (Hannah Spearritt) at least hint at taking their relationship to the next level. This episode opened with some really cute awkward moments which I loved because Connor was so stinking cute but HATED because, you know, the show ends next week. Grrr!!

Danny (Jason Flemyng) got lots of nice solo time this week as he takes it upon himself to break into Christine's (Belinda Stuart Wilson) headquarters. As much as I loved Cutter, Danny has, I think, surpassed him as my favorite ARC team leader. He and Cutter are both rather loose cannons, but Danny's just funnier and more sarcastic, know what I mean?
So while Danny is tied up with Christine and the mystery woman, Connor, Abby, Sarah (Laila Rouass), and Becker (Ben Mansfield) get called to this week's anomaly where rhino-like creatures were wreaking havoc around a campsite. While I didn't think Becker got a chance to really shine this week (boo!), I thought Sarah got a chance to show some real gumption in the field which was nice to see. And it was too funny when Abby goes to rescue the guy who was out there for his stag party, and he asks her if she's the stripper. The look on her face was just priceless!! And I loved how Becker and Sarah needled her about it, that was cute.
The set up for next week...so the mystery woman is Helen (Juliet Aubrey). And as much as I hate Helen, and she's probably in my top 10, maybe top 5 most hated television villains of all itme, I LOVED the fact that she's the one who gave Christine her comeuppance. Christine was so freaking annoying this series. Helen's turned out to be a really interesting character. I used to think she was just power mad, but this episode hints at just how insane she's become. Apparently she doesn't want to be some sort of world dictator with unlimited riches, and she doesn't have an altruistic bone in her body when it comes to saving people. Helen's completely jumped the shark into the waters of insanity...and there is no negotiating with her type of true believer.
If the trend holds, next week will be fantastic television and horribly depressing because we're probably not going to get any closure thanks to ITV's insane decision not to renew Primeval. Off to bang my head against the wall... ;-)
Posted by Unknown at 6:20 PM

I KNEW that mystery woman was Helen! They dressed exactly alike. And I love Abby's response to that guy: "Do you WANT to get out of here alive?" That's totally something I would say. :D

As for Danny being better than Cutter, you MUST be joking. What would even say that? *sob* No one can better than Cutter. :( Danny is a good character, but he's still way too goofy for me. Plus no Scottish accent.

@heidenkind - I'm actually rather surprised Abby didn't dropkick that guy or something. :)

Okay, granted I probably need to rewatch series 1 & 2 to renew my Cutter love, it has been a while. My memory's probably dimmed a bit, and it doesn't help that Cutter just didn't feel like he was living up to his full Cutter potential when he did appear in series 3, know what I mean? Douglas Henshall seemed to be going through the motions just a tad.

He did seem a little unenthusiastic in those first few eps this season. Poor Cutter. :(

I was hoping for a little more of a twist as to who the mystery woman was . . . my overactive imagination had her being Cutter and Claudia Brown's daughter who was trying to change the timeline back to where they could be together. But, I guess that's just the romantic in me. As soon as her face pixelated, I was pretty sure the only person it could be was Helen.

@Kaye - That would've been a nice twist! Especially since the "transformed" Helen did bear a slight resemblance to Lucy Brown! But all things considered, since the show is ending I'm glad that plotline didn't start, only to remain unresolved. That would've been (even more) maddening!!