Poirot: Cat Among the Pigeons 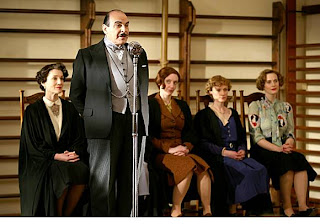 Possible spoilers...
I've been watching David Suchet play Hercule Poirot for almost as long as he's "owned" the role (twenty years, to be exact!). Masterpiece Mystery offered up two new-to-the-States mysteries this season, the first to air in about three years. The first of these two films was Cat Among the Pigeons (yes, I know it's been about two weeks since it aired...chronically late with the blogging, LOL!). Here's a bit about the story from the PBS website:
At the esteemed Meabowbank school for girls, Hercule Poirot is helping friend and headmistress Miss Bulstrode pick her successor. With his flawless sense of human nature, Poirot learns that the teachers have more on their mind than mentoring young girls. When a sadistic gym teacher is found dead with a javelin through her heart, the girls get a shocking education in murder, and Poirot is drawn deep into a compelling case involving international espionage, a revolution in a foreign land and a missing princess. As the girls become increasingly hysterical and the teachers more guarded, can Poirot uncover a ruthless killer, the cat among the pigeons? David Suchet reprises his role as the Belgian super sleuth in this adaptation of Agatha Christie's Cat Among the Pigeons.
Overall I have to say I was quite pleased with this episode. When I see David Suchet playing Poirot, the man amazes me with his agelessness. I missed the presence of Poirot's stalwart compatriots Inspector Japp, Captain Hastings, and Miss Lemon - however, I can only assume they don't appear in the original novel on which this story is based. But I'm such fans I wouldn't mind it one bit if they were written in. ;-) Oh well, c'est la vie!
This film is paced extremely well, and is rich in atmosphere and period detail. I absolutely loved the elite girls school setting - on the surface, Meadowbank is the best girls school in England, but seething just beneath the surface is a whole other world of backstabbing, jealousies, and resentments. Poirot describes the school as "the world in miniature," and the description is of course more than apt. Everyone - from the teachers to the students - have their little secrets that they might *kill* to keep.
A couple of casting shout-outs:
Miss Bulstrode, the headmistress of Meadowbank, is played by Harriet Walter. Walter has appeared in everything from Sense and Sensibility (1995) playing Fanny Dashwood to Little Dorrit, seen earlier this year on Masterpiece Classic, playing Mrs. Gowan. I'm used to seeing her play really snarky, generally unlikable characters, so it was a nice change to see her playing a sympathetic individual.
Inspector Kelsey, the obligatory representative of the local police who must, of course, butt heads with our genius detective (*wink*), is played by none other than Anton Lesser. Lesser is also a Little Dorrit alum, where he played the corrupt banker Mr. Merdle. Playing one of the "good guys," even if he's a bit dense (HA!), was a most welcome change in this case.
The eye candy for this ep was provided by Adam Croasdell, playing the undercover agent/gardener also named Adam at the school. Poor Adam is unlucky in work and in love...the character may be a bit hopeless but I'll look forward to seeing the actor in future projects. :-) 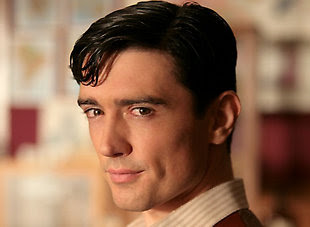 Isn't he a doll? :) Anyways, I thoroughly enjoyed this episode. The way the international espionage storyline intersects with the school drama was superbly handled IMO. Very, very well done - the final reveal was even a bit unexpected, and surprise reveals are always welcome - just means, of coruse, that the story's been very well directed.. Poirot's in fine form here, and this was a welcome return to the airwaves for my favorite quirky Belgian sleuth.