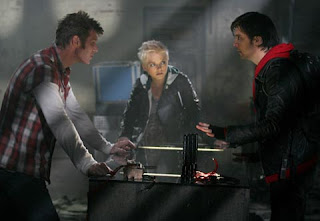 Spoilers...
Well, the fabulousness that is (was - SOB!) the show Primeval came to an end tonight. As a season finale, I thought it worked spectacularly well. As a series finale, however - it was bloody awful. :-( This episode showcased so many of the elements that made this show so much fun, and showcased all of the growth the cast and storylines had accomplished over the course of the previous 9 episodes. It's CRIMINAL that the network axed Primeval without giving the showrunners the opportunity to give it something remotely resembling closure. Don't get me wrong, I'm glad for the 23 episodes we got, but the show deserved a proper send-off.
The team was on fire this episode. Danny (Jason Flemyng) has strangely shown more interest in stopping Helen (Juliet Aubrey), than Cutter - her freaking ex - ever did. Cutter was always more interested in stopping her on some sort of academic plane, I suppose, but what I like about Danny is that he just wanted to get it done. Boots on the ground, guns, tenacity, whatever it took he was going to do it to stop her. It would've been nice to see a bit of that fire in Cutter, but oh well that was not to be.
So Danny decides to follow Helen into the future anomaly, taking Connor (Andrew Lee Potts) and Abby (Hannah Spearritt) with him for backup. Those two have never worked so well as they have under Danny's leadership. Before taking off there was an interesting moment in the warehouse with Sarah (Laila Rouass) and Becker (Ben Mansfield). Sarah's ready to go with them - in fact she seems afraid not to - but Danny orders her to stay with Becker, assuring her that he (I mean they) will be back. So the hopeless romantic in me can't help but wonder, would a hypothetical series 4 have led to a Sarah-Danny romance or a Sarah-Becker romance? Becker's definitely not one to put himself out there at this point, but he seemed to take an unusual interest in hanging out with Sarah this episode, I'm just sayin'. Example: going to Christine's anomaly center with no backup? Very out of character soldier boy. ;-) However, I have got to say that hanging out with Becker one-on-one and bonding while fighting off giant flying wasp thingys really brought out the best in Sarah. This may very well have been her best episode yet - showing off the triple threat of smarts, compassion, and butt-kicking, all in one hour.
I was really glad that only Connor and Abby went Helen hunting with Danny through the anomalies. They all get to be Macgyver-y when they restart Helen's (very cool touch-screen) computer. Connor got to show off his dinosaur knowledge and mad computer skills, and still got to be silly Connor when he talks himself into falling out of the tree during the stun grenade scene. This opened the door to some very nice Connor-Abby moments at the end of the episode (seriously I cannot lie, at the very end when they're all up in a tree I couldn't help going "Connor and Abby, sittin' in a tree, K-I-S-S-I-N-G"...that has got to be some new personal low, HA!!). While there are a TON of unanswered questions, I am so happy that I got to see some measure of closure to the Connor and Abby romance question.
After episode 6 aired, my friend Kaye and I were discussing the show and she made some reference to Danny's James Bond-like qualities (very true BTW). I love the fact that Danny's like James Bond in plaid flannel shirts. LOL! When he takes off after Helen, that was the kind of action I always wanted to see Connor take - but honestly that probably wouldn't have been half as satisfying show-wise. Connor would've probably let Helen talk him into something stupid. *rolls eyes* So Danny got to show off his James Bond qualities, along with a healthy dash of young Charlton Heston (seriously doesn't Flemyng look a bit like Heston?), as he gets to go chasing Helen through Planet of the Apes-land.
Helen is an excellent example of the true believer psycho who is so far gone she's completely stupid. So she kills a couple of the poor ape people, and then she gets crushed by a raptor that got through the anomaly because she lost her stupid glass anomaly closing device. Hoisted on her own petard, to bring Shakespeare into the discussion. ;-) Very sweet way to have her go...and the icing on the cake was when Danny finds twice as many ape people as Helen just poisoned, still alive and doing whatever it is ape people do.
With Helen out of the way it would've been fascinating to see where the show would've gone villain-wise. Would a past incarnation of Helen have come out of the woodwork, or more government craziness? The possibilities were endless. Really, you could've spent a whole series exploring 1) Danny becoming king of the ape men, 2) Abby and Connor going all Swiss Family Robinson and making their home in a tree to avoid being eaten by raptors, and 3) Sarah going all Cutter-like and figuring out how to get the three of them home. Because she was on fire by the end of this episode, and I think her character might've started to get really interesting by a (sadly hypothetical) series 4. Oh, and another thing - 4) Becker dating Sarah or something (because in one of the funniest moments of the series, when Danny loses Becker's gun to a future predator, Connor comments how that won't go over well, and they decide they have to get the guy a girlfriend...hilarious!!) and in general being fabulous because he will not lose three teammates to anomalies, because that's just not done. :-)
Good-bye, Primeval team...thanks for the memories and all that. You deserved so much more (stupid, stupid, STUPID ITV network!).
Posted by Unknown at 7:32 PM

I finally watched it last night. I knew it was going to end with Danny stuck there. Anthony couldn't believe it but I had to remind him that it was originally planned as a season end cliffhanger, not the end of the series— and you're right that it was great in that sense. I also had to remind him that his main concern was that they got rid of Helen. I'm cracked up by the fact that she died by a raptor landing on her! Overall, a crappy series ending but good episode.

@lori - OMG! I can't believe LORI LEFT A COMMENT ON MY BLOG!!

Okay, over that now. :) Helen's end cracked me up...one could argue considering everything she'd done it was a little on the lame side, but I liked it. I mean it just figures that the evil megolomaniac would die stupidly like that. LOL!

I'm only now getting caught up on all the TV I missed while I was away. I too thought there was a thing going on between Danny and Sarah. Now we'll never know... *sniff*

It was kind of bizarre how gung-ho Danny was to get Helen. Cutter would have been like, "Oh, you're right, she should be stopped, shouldn't she?" then go back to building his hilariously large anomaly model.

Here's how I thought they were going to wrap-up the series: Helen kills all the ape people, and she and Danny destroy each other, leaving Abby and Connor stranded in the super-distant past. Fortunately for humanity, they repopulate the landscape (so to speak), making Abby and Connor our ancestors. Hahahahahaha!

Oh, btw, I gave you an award on my blog: http://heidenkind.blogspot.com/2009/08/awards-spreading-love.html

@heidenkind - Abby and Connor as our ancestors...Abby I don't mind so much, Connor scares me a bit. LOL!!! And the whole idea of a Danny-Becker-Sarah triangle is rife with interesting possibilities...oh what could have been. *sigh*

And thank you for the reward!!! So sweet!! Someday soon I'll catch up on all my blogging...LOL!!

OMG I am so glad its coming back. That ending was sooo mediocre. Man I love this show. I still miss it.

Any other sci fi shows you recommend?

@Juju - You and me both! I can't wait till we start to get more news about the new episodes...and more than that, I can't wait till an air date is announced for the US! I need to go back and re-watch everything from the beginning as a refresher...I'll be a lot happier with this episode this time around, since we now know we have more to look forward to.

Have you ever watched Doctor Who? If not, I HIGHLY recommend starting with series 1 (Doctor #9, played by Christopher Eccleston). For non-British sci-fi, I have to give Eureka and Warehouse 13 shout-outs. :)