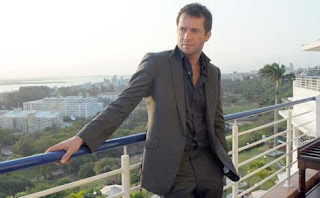 So is anyone watching The Philanthropist on NBC? It hasn't exactly been appointment viewing with me, but I've enjoyed the four episodes that have aired thus far enough to keep my DVR set for a season pass record it. The #1 reason the show works is James Purefoy. The scripts can be a bit middling and/or contrived, but Purefoy's talent and attitude always seem to elevate the material and make it occasionally compelling viewing (for me, anyway).
What's to like about the show, besides the fabulousness that is James Purefoy you might ask? ;-) I luv the globe-trotting scope of the series. Four of the eight scheduled episodes have aired, and we've traveled to Nigeria, Myanmar, Paris, and back to Nigeria again. Purefoy's character, Teddy Rist, has delivered vaccine to a disaster-struck village, investigated government corruption, and broken up a sex-trafficking ring. I also love the soundtrack to the series, the world music used throughout the show. It is fantastic - gives the show a bit, just a bit, of a James Bond-esque globetrotting feel.
Back to the Teddy Rist character - he's a playboy in more ways than one. Loves money and women (was fun to see Lucy Brown, a.k.a. Claudia/Jenny from Primeval make an appearance in the Myanmar episode as a doctor doing humanitarian work) and is haunted by demons from his past, namely the death of his little boy a few years prior. He's not a wholly moral, upstanding hero with no faults - he definitely has his vices, but that makes him kind of real, know what I mean? Purefoy plays Rist a lot like Bruce Wayne, only without superpowers (or batwings). I think that's another reason I like the character - everything he does, he does under his own power, just using his ingenuity and bravado, a "superhero" who really puts his life on the line.
The only thing that annoys me about this show are the voiceovers. Each episode is always told in retrospect, so there are these little annoying voiceover interjections throughout the episodes. I don't really understand why the show can't take place in "real" time, but whatever. Not sure if this show is a candidate for getting picked up for a 2nd season, and honestly I'm not sure it would work well for very long. But I'd be willing to give it a shot - anything to give James Purefoy a chance to save the world every week, right? :)
Posted by Unknown at 9:50 PM

I started watching this show, but I've stopped. Purefoy is great and I love watching him, but the half-baked subplots involving his company and "love triange" or whatever it's supposed to be between him, his besty, and Nell Campbell are just dumb. Also, I can't stand the way the story is told in voice-over or the fact that it doesn't take place in real time. Why do they do that?

And even Purefoy annoys me to a certain extent. He is cute, but the womanizing disturbs me.

I guess basically I agree with you on this show, but the things that annoy you annoy me a lot more. LOL

@heidenkind - LOL! Honestly I rather hope this show isn't renewed. It's been a semi-decent summer diversion for 4 eps, but I think stretching it beyond the scheduled 8, into a second season, would wear thin on my REALLY quickly. And totally agree w/ you about the Neve Campbell thing...so far her hubby is the one w/ the major issues b/c it's not like she's ever come close to going back to Purefoy. *rolls eyes*