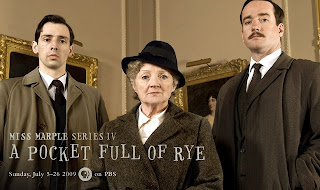 The Miss Marple mysteries are like the equivalent of television “comfort food” for me, so it was with great anticipation that I looked forward to the savvy sleuth’s return to Masterpiece Mystery Sunday night. However, I have to admit that my excitement was somewhat tempered by the knowledge that a new actress was taking up Miss Marple’s ever-present knitting needles – after three series as Miss Marple, Geraldine McEwan retired from the role, and with the fourth series, Julia McKenzie took the reins. I absolutely loved Geraldine McEwan as Miss Marple – she’s the reason I now love the character, and have been inspired to really delve into the Agatha Christie novels she brought to life on-screen. I grew up watching the Marple television show that featured Joan Hickson in the title role – and while I certainly get why people love the show, and that it was a faithful adaptation of the stories, Hickson’s take on Marple bored me to tears. McEwan brought life and humor and zest to the role – and if some liberties are taken with scripts, I don’t have enough of an emotional attachment to the stories themselves to really get up in arms about it.

A Pocket Full of Rye is the first film to feature McKenzie, and I am so, so relieved that the basic tone and style of the series isn’t changing. McKenzie effortlessly fills the gap left by McEwan’s departure, and brings her own spark and brand of humor and compassion to the role. I thought it was a little strange that this story didn’t feature Miss Marple as prominently as she has been in other mysteries, especially considering this is a “Marple” book, not a regular mystery where the character is inserted into the action. However, I’ve never read this book and decided to start it yesterday for comparison purposes – and so far, Miss Marple isn’t front & center in the action of the book, either. Go figure. ;-) 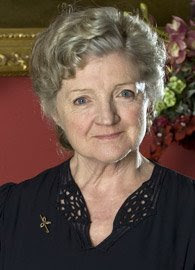 A bit about the story (taken from the PBS website):

Businessman Rex Fortescue drops dead after breakfast, apparently poisoned. The only clue is incomprehensible — grain found in his suit pocket. It's obvious that Fortescue isn't exactly missed. Between his estranged and angry children and a wife who seems to not be at a loss for comfort, the Fortescue house is full of secrets. Inspector Neele (Matthew Macfadyen, Little Dorrit) is dispatched to investigate, but makes little progress until the arrival of Miss Marple. For Marple, the case is child's play — the killer seems inspired by the rhyme "Sing a Song of Sixpence." As the murders pile up, Marple discovers a motive as dark as blackbirds. Julia McKenzie makes her debut as Miss Marple along with a strong supporting cast (Rupert Graves, The Forsyte Saga; Hattie Morahan, Sense and Sensibility) in this adaptation of Agatha Christie's A Pocket Full of Rye.

One of the biggest treats in the previous three series of Marple mysteries is identifying and enjoying the wild variety of familiar British acting talent that have taken on guest star roles in the various films. A Pocket Full of Rye continues this tradition, and I have to call out my favorites:

Of course the most important reason to view this episode is the presence of Matthew Macfadyen as Inspector Neele (that little moustache does a surprisingly good job of disguising him, LOL!). This has been an excellent year for Matthew on Masterpiece, as earlier this year he played Arthur Clennam superbly in the out-of-this-world, amazing, fantastic miniseries Little Dorrit. Inspector Neele was a fun role to watch Matthew take on – Neele isn’t a romantic lead, he’s competent, straight-laced, and has a wicked gift for dry understatement (i.e., the "dead as a dodo" line). My favorite moment of the entire show is when Miss Marple looks at Neele rather slyly remarks that he resembles Errol Flynn. Looking extremely pleased with that comparison, Neele smoothes is ‘stache and remarks, quit happily, “you think so?” H-I-L-A-R-I-O-U-S. The exchange is a wonderful example of how Miss Marple succeeds in winning those who doubt her abilities or her usefulness over. This little old lady may seem quite harmless, but she’s an astute observer and knows exactly when the right word or look needs to be played in order to advance her cause. Well played by Julia McKenzie!

Lucy Cohu plays Pat, the elegant wife of Lancelot Fortescue, the “black sheep” of the family. Two of Cohu’s most recent appearances have been as Jane Austen’s sister-in-law, Eliza, in Becoming Jane and dance teacher Theo Dane in the delightful Ballet Shoes. I really, really like her and look forward to seeing her in new projects – she’s elegant, classy, and not a stick figure like so many actresses out there.

Anna Madeley, playing Adele Fortescue, is a familiar face to Masterpiece viewers. In 2006 she starred as the title character in The Secret Life of Mrs. Beeton, and in 2008 she played Lucy Steele in Sense and Sensibility. Though Adele only makes a brief appearance in Pocket, Madeley brings a lot of Lucy Steele-esque humor to the role which is fun to see.

Hattie Morahan is another Sense and Sensibility alum – she played the best version of Elinor Dashwood to date (in my view anyway, LOL!). In Pocket she plays Elaine Fortescue, who’s not at all sorry to have her father out of the way, since that frees her to marry her communist boyfriend. Since she hasn’t been acting all that long, I thought Hattie Morahan was almost unrecognizable as Elaine. However, I thought she fit the period well and enjoyed seeing her take on a more “modern” role, albeit a small one.

I had to look up Ben Miles - he plays the straight-laced eldest son, Percival Fortescue. Miles bears more than a passing resemblance to Primeval star Ben Miller IMO (weird, no?), yet I can’t find any info that they are related. He seems extremely familiar, but the only project I can recall seeing him in is the loverly Under the Greenwood Tree, where he played the thwarted Parson Maybold. Apparently he’s also been in series 1 of Lark Rise to Candleford, a BBC series that looks very Cranford-esque, which finally comes to region one DVD this October.
All in all, I thoroughly enjoyed this episode. It contained everything I love about this mystery series - great pacing, excellent costumes and period detail, topped off with wonderful performances by the cream of British acting talent. Next up in the series is Murder is Easy. Can't wait!
Posted by Unknown at 9:27 AM