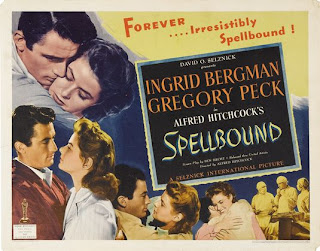 This week's entry in My Friend Amy's Summer of Hitchcock film festival is the 1945 psychological thriller Spellbound, starring Ingrid Bergman and Gregory Peck. It's been several years since I've made time to watch this film, so I feel like I was able to approach it with fairly fresh perspective this time around. Spellbound was meant to capitalize on the public's newfound fascination with psychoanalysis, a fact the filmmakers make abundantly clear by a proclamation on the screen before the film even starts, extolling the virtues of psychoanalysis in healing the disturbances of sane minds.

A bit about the story...

Ingrid Bergman plays Dr. Constance Peterson, who works at a mental hospital called Green Manors. (Seriously, why do asylums in movies always have words like "green" or "manors" in their names? It cracks me up...) She is completely devoted to her work, until the new head doctor, Anthony Edwardes, arrives - played by a positively yummy Gregory Peck in only his fourth film role. The two are, of course, instantly attracted to each other - you can almost see the sparks fly when they first meet - and wonder of wonders, Constance the ice queen begins to thaw. But Dr. Edwardes' strange behavior jeopardizes Constance's newfound romance he has this strange, almost violent aversion to parallel lines, and then a breakdown in the hospital operating room follows, raising the suspicions of the entire staff. Edwardes is not who he claims to be, and Constance must use all of her skill to discover whether or not he's a victim or - perish the thought! - the perpetrator of the crime that's tormenting his mind.

I don't think Spellbound has stood the test fo time quite as well as some of Hitchcock's other efforts (such as Rear Window). Admittedly I am the last person who could accurately judge the psychology as its presented on-screen, but I'll go out on a limb here and say the methods come off as a little dated. Plus there's the rather bipolar style of the film. On one hand you have scenes (such as when Constance and Edwardes ditch work and go for a picnic lunch) that are filmed in a highly romanticized style, very much like "women's pictures" of the time period (think Dark Victory or Now, Voyager), with soft focus lenswork and swelling, romantic music. Miklos Rozsa's score is undeniably beautiful, but more often than not it feels out of place and distracting within this film. And then you have the sharp, tense clarity of the Salvador Dali-designed dream sequence. I've never been one to gravitate towards surrealist art, but the sequences are undeniably striking, particularly in how they treatment of those scenes differs from the rest of the picture.

All that aside, the main reason I still enjoy this film is Gregory Peck and Ingrid Bergman's off-the-charts chemistry. As Tasha points out in her review of Spellbound, it's a surprisingly sexy movie, especially considering it was made over 60 years ago! Maybe it was the Freudian references that let the double entendres get by the censors, LOL! ;-) One of my favorite scenes is when Constance visits Anthony's rooms in the middle of the freaking night, wakes him up and makes some lame excuse about wanting to read his book on the guilt complex. Then they kiss - and really, it's a great screen kiss - but Hitchcock had to cut away to a scene of all the "locked doors" in Constance's mind blowing wide open. That scene cracks me up every time I see it, it's so delightfully random by today's standards. Any cheesiness aside, I just love watching Bergman and Peck together on-screen. Peck still had a real boyish charm to his good looks that would only become more rugged and defined over time, and Bergman positively glows - the camera just loves her here. Some of their scenes together are still a bit swoon-worthy. :)

The Spellbound DVD is chock-full of interesting special features that (since I bothered to watch them, HA!!) really enhanced my appreciation of the film. "Dreaming with Scissors: Hitchcock, Surrealism, and Salvador Dali" delves into the making of the dream sequence (for example, the original sequence was about 20 minutes long, but was deemed "too disturbing" for the final cut), and the touches on some of the trouble Hitchcock had with producer David Selznick of over this project. The "Guilt By Association: Psychoanalyzing Spellbound" featurette gives some really interesting context to this project in terms of just how ground breaking the subject matter was back in 1945. Widespread public interest in psychoanalysis stemmed from (at least in part) soldiers returning from war with post-traumatic stress disorder (as its now known) and how they were treated. Fascinating stuff! There's also a short featurette on Rhonda Fleming ("A Cinderella Story"), giving her perspective on the film and her start in Hollywood (Spellbound was her first credited role). I rolled with laughter when she talked about being assigned the part of the nymphomaniac patient seen at the beginning of the film - only since she & her mother didn't know what a nymphomaniac was, they had to look it up. Her mother was relieved to discover that the studio wasn't typecasting her daughter (LOL!!). ;-)

While Spellbound may be a bit dated, especially when compared to some of Hitchcock's other films, it's still worthy viewing - particularly as a document of the time, and first and foremost for Gregory Peck and Ingrid Bergman's fantastic love story. :)
Posted by Unknown at 3:38 PM

I do think the romance between Edwardes and Constance is the only reason to watch the film. The suspense plot just really is not that suspenseful, and the psychoanalysis is hilarious at best.

I loved that scene in Edwardes' bedroom, too. When the doors started opening, I was like, "Hur? Is this Hitchcock's version of dot dot dot?"

Fresh out of 95 average in an AP Psychology class, I affirm your idea that the psychology is a bit outdated (and over-dramatized). The whole idea of the "subconscious" and "unconscious" is a lot more subtle than what the movie paints it to be (most of the time). Freudian Psychology also has a lot more facets to it than the movie gives it credit for. For filming purposes, Alfred chose to focus on the Freudian defense mechanism of repression. There's actually a lot more.

This is one of my favorite Hitchcock movies, though, so obviously it didn't annoy me too much. Hitchcock's use of psychology in the majority of his movies was actually rather accurate in most cases (save a few).

With Gregory Peck in the film, who really cares about the accuracy of the information anyway? You forget about that after watching his face for five seconds. *Yum*

@LitLover - Thanks for sharing your insight on Spellbound! I think for the time, Hitchcock was way ahead of the curve in his portrayal of psychological issues, etc., even if they are a tad dated now. And you are SO RIGHT about Gregory Peck. DELISH. :)