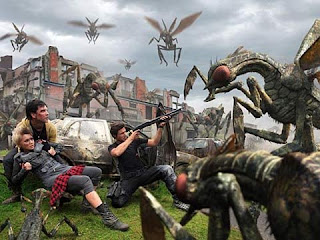 Spoilers...
After a break last week, Primeval returned tonight with the first of its last three episodes (say it with me...*SOB*!!). This time, an anomaly to the future has opened up, and guess who's back - the insanely evil future predators, first seen, if memory serves me correctly, in the finale of series 1 (episode 6 of the series overall). This episode contained several great moments, starting with when the team first arrives at the anomaly site, and they all start griping about Danny's (Jason Flemyng) driving, and Becker (Ben Mansfield) complains about being stuck in the back seat. I just love the whole vibe Danny's presence has given the team. As seen later in the episode, Danny knows how to make tough decisions and be a capable team leader. But in those moments inbetween, when lives aren't on the line right that second, his presence brings an element of fun to the team. They're like this wonderfully dysfunctional family, that will poke and gripe and needle each other, but at the end of the day they are willing to lay their lives on the line for each other and their work.
If the show is going to be ending in a few weeks, I am grateful that this episode gave me a scene I'd been wanting to see - Lester (Ben Miller) and Connor (Andrew Lee Potts) as roommates! :) There's a whole show right there in that situation, Lester & Connor, the Odd Couple of the 21st century!
This episode sees Abby's (Hannah Spearitt) situation with her unbelievably stupid younger brother really come to a head. Not only has his presence forced Connor to room with Lester (well, honestly, I'm grateful for that development because it's resulted in some real hilarity), but it's caused a lot of tension between Connor & Abby - i.e., she thinks Connor's some sort of ingrate because he refuses to rat about what a git her brother is (see losing Rex in episode 7...ugh!). So the entire team sans Sarah (shocker...I still think Laila Rouass has been criminally underused during her time on this show) must put their lives on the line when Abby's brother disappears through the anomaly. This was where Abby really started to get on my nerves - she was being extremely headstrong because she was upset, I get that - but did she have to be so annoying while being concerned for her only living relative's safety? Is that asking too much? *sigh*
However...good points out of this scenario:
Becker gets to be wonderfully heroic. I absolutely loved the moment where he got so exasperated with Abby refusing to listen to him that he called her "Abigail." You could cut the frustration in his voice with a knife. And then when he proves willing to sacrifice himself for Danny, Connor, Abby, and her STUPID INGRATE OF A BROTHER - I was so freaking proud I cheered. (There is an upside to watching these last three episodes, knowing they're the last episodes of the show - if someone kicks the bucket I don't have to fathom continuing to watch the show without them. Know what I mean?) But Becker LIVES!!! That made me very happy. :) It's nice that he's proven to have ability as well as sense (unlike Stephen!).
Connor and Abby finally, finally, FINALLY actually KISS!! Yes, said kiss was marred by the most gosh-awful, random song insertion in the history of awkward television moments (what was that, Tom Jones?!). But if the show is ending at least I got the satisfaction of seeing their relationship progress. I'm sure it didn't hurt that Andrew Lee Potts and Hannah Spearritt are a real-life couple (at least I rather hope they still are). The look on Connor's face when Abby breaks the kiss is just priceless. :) His character has really grown & matured throughout the show's run, without losing any of the goofy charm that makes Connor so appealing.
So who is the woman Christine's (Belinda Stuart Wilson) flunkie brings back through the anomaly? Will Danny really listen to Lester's admonition to play by the rules? (I think not!) I'm attempting to mentally prepare myself for an extraordinarily unsatisfactory show finale in two episodes...but I'm sure it'll be wrenching. It's a real shame this show was axed when creatively it still shows so much promise!
Posted by Unknown at 7:12 PM

Ruth
I have seen Bride and Prejudice too. It has been years. lol :)

OMG I was thinking the same thing during the kiss. They totally ruined it with that awful awful music.

@Juju - I know, so sad...but kind of funny in a random way. I heart Andrew Lee Potts...can't wait for the new eps so he once again graces my TV screen with his presence!