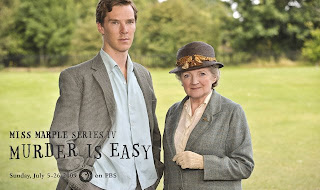 Spoilers...
Considering a new Marple episode is on Masterpiece Mystery tonight, I know I'm really late in posting about last week's episode a week late. But I was left, quite honestly, slightly freaked by last week's episode (I couldn't get my head around the idea of Christie writing an incest/rape plot), and wanted to read the novel before I blogged about the film. So now that that's accomplished, on to a bit about the film from the PBS website (because trust me, the film and the book are two entirely different things!):
Miss Marple coincidentally meets a woman on the train who confides that she is on her way to Scotland Yard to report two murders. "Murder is easy," the woman says conspiratorially. "As long as no one thinks it is murder." When Pinkerton herself is found dead, Miss Marple travels to the quaint village of Wychwood to pick up the trail. The village is populated with any number of suspects — a beautiful, young American on some sort of mission, a successful politician and an ambitious lawyer. But even with the help of retired policeman Luke Fitzwilliam (Benedict Cumberbatch, The Last Enemy) will Miss Marple be able to unlock the secrets of this sleepy village?
In many ways this film resembles one of my favorite entries in the rebooted Miss Marple franchise - The Moving Finger. Both stories take place in what are, apparently, peaceful, tranquil little villages - the most unlikely locale for homicidal maniacs, right? Or not, as the case is proved here once again. To start with, I should say Murder Is Easy isn't actually a Miss Marple book. Before I'd even read the novel this week, it was easy to spot that Miss Marple co-opted at least half of the role of Luke Fitzwilliam (Benedict Cumberbatch). Miss Marple has been quite successfully inserted into non-Marple books in other episodes of this series (particularly By the Pricking of My Thumbs, which is a Tommy & Tuppence novel). I'm all for inserting Miss Marple into non-Marple books, since those are rarely, if ever, filmed. And, at least to date, they remain fairly faithful adaptations of the original stories in basic essentials in spite of the new investigative presence. So, let's start off by talking about the "stunt" casting in this episode. :)
First up we have the aforementioned Benedict Cumberbatch (Amazing Grace, Atonement) as Luke, recently returned from policework overseas, and attempting to recalibrate to English life. As the main character in the novel, in order to "make room" for Miss Marple he loses half of his role. Luke's character isn't as compelling as I would've liked to see, given that I think Cumberbatch is a fantastic actor, but I did enjoy the scenes where he got to play off Julia McKenzie's Marple. Which brings me to my second favorite piece of casting - Russell Tovey (Little Dorrit) as Reed, the local constable. Tovey does a terrific job of playing Reed with the right balance of go-get-'em smarts and uncertainty at being caught way out of his depth investigatively. My favorite scene in the film is, I think, the sequence where Reed interviews several townspeople, and it turns out that Miss Marple is listening in from the next room, coaching him along with the occasional note. Tovey and McKenzie played off each other really well here, and were a lot of fun to watch.
It was great to see Anna Chancellor in a new project. Anyone familiar with the "Colin Firth" Pride and Prejudice will recognize her as the one and only Miss Caroline Bingley. She plays the doomed Lydia Horton, who "stole" the Major from Shirley Henderson's character, Honoria Waynflete. Hands down the creepiest bit of casting is Henderson (Moaning Myrtle in the Harry Potter films, Miss Pettigrew Lives for a Day). Henderson plays creepy and disturbing extraordinarily well. It's freakishly uncanny!! The woman is 44, apparently, but she looks a good 15 years younger than that at least, and her height (only 5'1/2") only reinforces her waif-like appearance. The idea of someone, who looks like Henderson, killing five people, just boggles the mind.
I ended up appreciating this film a bit more on the second viewing as a creepy show. The first time I watched it I went in expecting more of a creepy, cozy-style mystery, along the lines of The Moving Finger. You get that, of course, but then for reasons I've yet to figure out the filmmakers had to go for the low, salacious angle of having all of these crimes stem from the results of Honoria's mentally retarded brother getting drunk and raping her, resulting in a pregnancy which led to the randomly inserted American orphan angle, Bridget searching for her roots. (Speaking of Bridget, when she discovers her roots why is she not more...disturbed?! Just sayin'...) I'm not completely naive - I get that the 1950s weren't all Donna Reed, and a lot of crappy things happened then as happens today. But this movie seemed determined to show that veneer of gentility everything crappy and awful that could happen, did. I mean there's a fine (okay, sometimes it's a neon flashing sign, but whatever) line between a nicely mysterious, creepy story and outright distasteful. And I guess what I'm trying to say, is this show ended up more on the "eewww" distasteful end of the scale for me than not. Book vs. film comparison after my review of the novel, which will be in the next post.
Posted by Unknown at 12:20 PM

i don't normally watch the agatha christie movies but Bernard's in this one eh? hmmmmmmm

@Deborah - He & Russell Tovey are the best parts of the film! Though Bernard is a bit under-used IMO.

Yeah, I agree with you. Loved Luke and wish there was more of him in the show. But when the story took that turn where her brother raped her, so she killed him...? I was like, "Hang on, wot?" Pretty hardcore stuff. I liked show in the beginning but I don't think it was much of a mystery. And the subplot between Luke and that American chick was just lame.

@heidenkind - If Luke had been more like the Luke in the book, and they hadn't completely rewritten the Bridget character into a randomly orphaned American, the show would've been so much better.