Review: The Case of the Missing Marquess by Nancy Springer 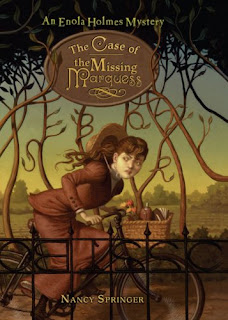 When Enola Holmes, sister to the detective Sherlock Holmes, discovers her mother has disappeared, she quickly sets off to find her. Disguising herself as a widow, Enola embarks on a journey to London, but nothing can prepare her for what awaits. For when she arrives, she finds herself involved in the kidnapping of a young marquess, and must flee murderous villains and try to elude her shrewd older brothers – all while attempting to piece together clues to her mother’s strange disappearance. Among all the mayhem, will Enola be able to discover the necessary clues and find her mother?

Women have always upset Sherlock Holmes’s equilibrium (see Irene Adler from the original short stories or Mary Russell from Laurie R. King’s fantastic mystery series). Holmes’s family background is one aspect of his life that has received scant, if any, attention in the various Holmes pastiches that have appeared over the years. In the first Enola Holmes mystery, Nancy Springer dares to imagine a most unconventional mother and much-younger sister for the famed detective, both highly unconventional women well capable of throwing his order-loving world slightly off-kilter.

Fourteen-year-old Enola has never known her considerably older brothers. She’s lived a relatively secluded life with her mother on the family estate, convinced her brothers want nothing to do with her because of the gossip surrounding the fact that she was an “unexpected” addition to the family. However, all of Enola’s assumptions about her life and family change when her birthday arrives and her mother vanishes. When Sherlock and Mycroft descend on the estate in search of their wayward parent, Enola discovers the family dynamic is far more complicated than she’d ever surmised. And while she craves a relationship with her brothers, Enola quickly realizes that she has little desire to acquiesce to their plans for her future – and if their mother is to be found, she must be the one to do the finding. Armed with her mother’s last gift – a cryptic book of ciphers – Enola sets out to make her way in the world and finds herself in more danger than she could’ve possibly imagined, needing all her untapped skill as a member of the Holmes clan in order to survive.

The character of Enola is an absolute gem. She’s got spunk and gumption, and as a woman has a special set of skills and insight that her famous brother lacks, thanks to his rather dim view of the “fairer” sex (my favorite Sherlock quote is when he refers to Enola’s “limited cranial capacity” – ouch!). Springer includes lots of interesting info about ciphers and the language of flowers, the knowledge of which helps set Enola apart from her family and make up her own special skill set. The Missing Marquess is an all-too quick, but thoroughly absorbing read. Springer packs a lot of atmosphere and detail into each chapter, resulting in one of the best YA reads I’ve come across. I cannot wait to discover the further adventures of the one and only Enola Holmes!
Posted by Unknown at 8:52 PM

Wow, what a cool premise. I will HAVE to check this out! I love the cover.

@Jenny - Thanks for stopping by! The covers for this series are just terrific. I ordered books 2 and 3 from Amazon and currently they are en route...can't wait to get my hands on them!