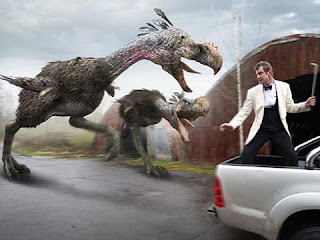 Spoilers...
I finally got around to watching episode 6 of Primeval today. Allow me to just take a moment to say I'm incredibly grateful for vacation days, and I'm also wildly hopeful that maybe, just maybe, the craziness of the last few weeks is winding down.
I absolutely loved this episode. The "terror birds" bore more than a passing resemblance to giant, over-grown ostriches. Despite their ridiculousness, they were surprisingly a bit scary. I mean who'd of thought giant ostriches could be such killing machines? LOL! There were so many moments that I absolutely loved in this episode...here's the rundown:
Danny (Jason Flemyng) giving a mean James Bond impression while working with Becker (Ben Mansfield) to test the facility's security. The humorous rapport that had going on was fun to watch. I LOVED the brief moment when Danny shot Becker's confidence that security was perfect by making an off-hand reference to a camera in an air duct. He's fast proving to be an adept team leader.
Lester (Ben Miller) giving Connor (Andrew Lee Potts) a ride to work but determined to hide the fact that they are now "flat mates" (see episode 5 for Lester's uncharacteristic moment of compassion, ha!). The whole "I'm senior managment and you're...whatever you are" comment cracked me up!
After Christine (Belinda Stuart Wilson) takes over the ARC, Danny, Connor, Abby (Hannah Spearritt, and Sarah (Laila Rouass) flee to the woods (random I know) and come across some sort of an abandoned lab station. I really, really liked how the setting was "frozen" in time. When Sarah begins to read some of the abandoned journals and finds mysterious references to "something" coming, you of course know that the "something" has to refer to a creature from an anomaly. The set up sort of reminded me of Danny's introduction to the team in episode 2 - as I said in my review of that episode, if anomalies have been appearing throughout time, other people had to have encountered them. Now whether or not they knew what to make of them is another story entirely. And in the "oh my gosh that's so sweet" category, I absolutely LOVED when everyone dressed up in 1930s clothes and Connor and Abby pulled a Fred and Ginger and started dancing. (Danny doesn't look half bad in a tux either, just sayin'...)
Despite the sheer ridiculousness of the ostrich-like creatures, I thought this episode gave a good view of how well the new team was coalescing. Danny has a lot of potential as the new team leader - he seems more devil-may-care, more energetic, dare I say it - more fun? - than what has previously been seen on the show. And hallelujah thank you for finally letting Sarah see some serious action instead of just sitting in the ARC cleaning off artificats. LOL!
And now to the best part...in my post on episode 4 I mentioned being a little worried about Becker's loyalties - is he truly loyal to the ARC team, or is he a soldier 1st and foremost, potentially at risk of being corrupted by Christine? In another hallelujah moment, I was oh so happy to see that Becker kicks butt in more ways than one - the fact that he's not above a little espionage in order to sabotage Christine's hostile takeover of the ARC was, in a word, awesome. The way he played Christine and she never even saw it coming - well there's just not words for how fantastic that moment was. If that had been the only great moment in the show that would've been enough, I was so freaking happy about it. LOL!

Which brings me to an even better moment, the crown jewel moment of all the hilariously wonderful bits in this episode, the moment where Lester gets his very own SLOW CLAP!! That was bloody brilliant to quote Ron Weasley. Absolutely fantastically bloody brilliant. The look on Lester's face was priceless. It just reinforced my love for his character a hundred times over. 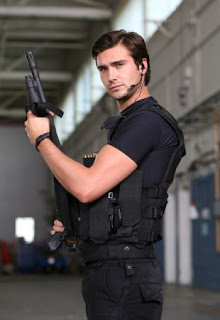 And just because I can, and because he was so fantastic in this episode, here's a completely gratuitous shot of Becker. :)
Posted by Unknown at 10:39 AM

I really enjoyed this episode too (although I have to admit I dozed off in the middle... I was really tired). Lester and Connor are turning into the Odd Couple of the ARC. :D I loved it when the cute little dinosaur was in Lester's trunk chewing on his classified documents, and Connor was like, "Well they were going to be shredded anyway." And Lester totally deserved that standing o! Yay Lester! ;)

I think the show is definitely switching up how the stories are told in each episode, and I kind of like it. It's like each anomaly or dinosaur incident leads them into a different type of movie.

@heidenkind - EXCELLENT point and extremely well put. This episode REALLY reminded me of a couple of movies I'd seen before, I just couldn't decide on one. It was like a mash-up of an Agatha Christie mystery with Sir Arthur Conan Doyle's THE LOST WORLD.

This was such a strong episode IMO it really makes me even madder when I think about it getting canceled, not because of bad ratings or anything like that, but most likely 'cause of $. Argh!!