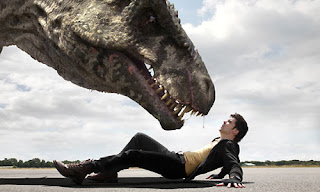 So in case you haven't heard, ITV has decided to break my heart and cancel Primeval. Apparently this news broke yesterday and I just discovered it this afternoon (and am rather depressed about it, lemme tell you!). The way things stand now, once the final five episodes of series 3 finish their run on BBC America, that'll be it. Supposedly there's some talk that the SciFi Channel could ride to the rescue, but personally I'm not holding out much hope. If the feature film (sure to be Americanized) actually ends up being made, and ESPECIALLY if the networks over here decide to do their own version of the show, I'm afraid that this version of the show is dead. :-( What really makes this tragic IMO is that the show is far from hitting its creative peak - I've been really pleased with a lot of the writing this season, and the cast members that are sticking around are more comfortable in their "skin" by the episode.
I need to try and remember that I've always said I'd rather a show bow out early than stick around too long and get really bad, but dang it the way things stand now Primeval isn't going to get an even halfway decent series finale. Grr!!! Yet another great television tragedy to add to my log of inexplicable things networks do to hack me off. *sigh*
Posted by Unknown at 7:04 PM

Email ThisBlogThis!Share to TwitterShare to FacebookShare to Pinterest
Labels: Primeval