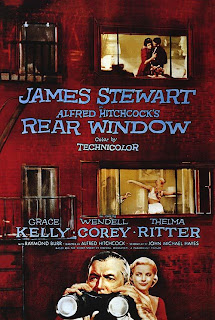 Spoilers…
Rear Window is not only one of my favorite Hitchcock films, it’s one of my favorite films, period. It’s also the third film up for discussion in My Friend Amy’s Summer of Hitchcock. A bit about the story…
James Stewart plays magazine photographer L.B. “Jeff” Jeffries, sidelined to a wheelchair for several long, boring, HOT weeks thanks to a broken leg. Out of sheer boredom, he takes to “observing” his neighbors, getting to know them through the glimpses of their lives afforded through their apartment windows. His high society girlfriend Lisa (Grace Kelly), best friend police detective Thomas Doyle (Wendell Corey), and nurse/physical therapist Stella (Thelma Ritter) are all exasperated with his voyeuristic pastime. All that changes when Jeff discovers that the nagging, invalid wife of a salesman living across the way has suddenly disappeared. The more Jeff sees, the more he becomes convinced that he’s discovered a murder – but how can he possibly prove it from the solitary, limited vantage point of his living room window?
I have a very distinct memory of the first time I watched Rear Window – AMC aired the film 2 or 3 times after it was remastered several years ago (perhaps around 2000?). I was sitting on my parents’ sofa and I watched the film all the way through twice in a row. I was thoroughly absorbed by the story and fascinated by the sheer amount of storytelling and information that Hitchcock crammed into each frame of film. The first time I watched the movie, you focus on Jeff, Lisa, and the murder. The second time, though, I allowed myself to focus on each of the “mini movies” playing out in the apartment windows within Jeff’s view. Those little “slice of life” vignettes are one of my favorite aspects of the film. I especially love how “Ms. Lonelyhearts” goes through some wrenching experiences but eventually finds happiness with the Songwriter. It’s the romantic in me, I know. :)

I love, love, love James Stewart and Grace Kelly in this film. Their chemistry is – surprisingly – off the charts. Their banter as they work through their relationship issues, over Jeff’s penchant for traveling and dangerous jobs, her image as a “fragile” high society flower, is both hilarious and tons of fun to watch. Stewart is absolutely fantastic in this picture. He’s a lot edgier than what you get in his sweeter (I need a better word, only one I can come up with at the moment), more “wholesome,” all-American roles (think Harvey or Mr. Hobbs Takes a Vacation). Grace Kelly is absolutely terrific as Stewart’s foil. Her looks and poise make it abundantly clear that she was born to privilege, but she balances that out with a ton of humor and outright spunk. I love how she refuses to give up on Jeff and she’s more than game for the challenge of catching the bad guy, and so much the better if she gets it through Jeff’s thick head that she’s more than just fancy society window-dressing.

The supporting cast is tremendous, particularly Thelma Ritter as Stella. She’s funny, sarcastic, and completely fearless when it comes to speaking her mind. I also enjoy seeing Wendell Corey make an appearance as Jeff’s friend Thomas – he is always a solid character actor, and he gets extra points for appearing in another one of my favorite films, Holiday Affair. Perhaps the biggest casting shock is Raymond Burr as the villain, Lars Thorwald. It’s quite jarring to realize that the man playing this cold-blooded, creepy killer is best known as the paragon of justice & virtue that is Perry Mason. Underrated actor, no?

I’m so glad for the excuse to view Rear Window again and blog about it. Grace Kelly embodies all the wit, charm, and sophistication you could wish for – with backbone to boot! – and James Stewart is funny, humorous, and endearing as our scruffy voyeur. I do wonder, though, what Hitchcock would think of society today. Rear Window still provides food for thought on society’s penchant for voyeurism, how far is too far, etc. With the explosion of the 24-hour news cycle, growing penchant for a “cult of celebrity,” and social networking on the internet, voyeurism has come a long way since 1954. Or is it more accurate to say that the more things change, the more things stay the same – people and their motives haven’t changed, just the voyeuristic methods? All that aside, the one thing Rear Window guarantees is a thoroughly absorbing, fascinating viewing experience. It's a movie I never get tired of watching. The movie is available in single disc and double disc DVD editions (I recommend the latter, the 2nd disc is loaded with tons of special features).
Posted by Unknown at 3:56 PM

Oh man I love this movie. I just added it to my overloaded Netflix que. Great job reviewing this film.

@Carol - Thank you! I really enjoyed revisiting it!

Loved your review - I remember when I was in high school, I took a summer program with a Hitchcock course which was just fantastic. I think Psycho is still my favorite!

@Lana - Thanks! And a Hitchcock course?! I'm incredibly jealous, would've loved that!