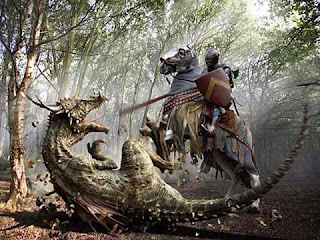 Spoilers...
Tonight's episode of Primeval was, quite honestly, a bit of a let down for me after last week's episode with it's scene after scene of sheer, hilarious, awesomeness. This episode was a bizarre mash-up of A Connecticut Yankee in King Arthur's Court, Beowulf, and the movie Timeline. That's not to say the episode was a total wash. I forgot to mention Rex last week, when Abby's (Hannah Spearritt) stupid little brother loses him in a poker game. Connor (Andrew Lee Potts) got several nice moments to show his "sensitive" side, when he discovers what's happened to Rex but decides to try and fix the problem himself instead of telling Abby what her brother has done. And then when he rushes to Abby's side to help her save the dragonlike creature he was positively oozing sweetness & concern. Classy Connor, very classy. He's *gasp* maturing!! :)
I really liked the whole idea of someone from the past stumbling through an anomaly - it's a natural extension of the idea that anomalies have been messing with peoples heads for years by making all sorts of weirdness happen throughout history. Danny (Jason Flemyng) and Connor shared several nice comic moments when they were chasing the knight through London (I thought it was hilarious when Danny wanted to separate and widen the search and Connor was all "haven't you ever seen horror films?!"). Danny's big knock-down, drag-out fight with the knight was also fun, especially because Flemyng looked like he was relishing every moment of it.
Sarah (Laila Rouass) finally got to do something that seriously impacted the operation, when she went all rogue and decided to go through the anomaly to research the knight. So, so much potential with this scenario, but somewhere along the way the ball was dropped on the storytelling and it left me a little flat. The extended scene where she keeps trying on different medieval costumes felt extra stupid, especially in the middle of this huge crisis where (supposedly) time is of the essence. And then when she goes through the anomaly, we only get a brief scene where she succumbs to the old cliche of bribing kids with chocolate?! I realize that you can't possibly fit everything you'd ideally want into a show that's less than an hour long when you take out the commercials, but still... (I'll TRY to stop whining...LOL!)
Considering Abby never finds out what her brother did with Rex, she seemed so out of sorts this episode. It was annoying. I REALLY got ticked when she was threatening to shoot Becker (Ben Mansfield) with the tranquilizer gun just because was freaked that he was going to shoot the dragon while TRYING TO PROTECT HER, YEESH! However, that whole exchange did lead to one of the highlights of the episode - after diving through a crate of strawberries, Becker doesn't even bother to get up before he starts to snacking after the dragon collapses. His deadpan delivery was hilarious!
The best moment of the episode, though, was Connor's. When he goes to retrieve Rex, the whole scene turns into some sort of western style standoff. In another movie guns would be a blazin', LOL! Plus, it's a nice change when someone throws the line "you and whose army" at a character, and the cliche receivee can step aside and actually reveal their own personal army. It's especially nice when said back-up is led by the likes of the yummy Becker. LOL!
With only three episodes left, Primeval will be back in two weeks. Hopefully Lester will see more screentime. ;)
Posted by Unknown at 6:26 PM