Yes, I know, still haven't caught up on the Primeval blogging. *sigh* ;-) 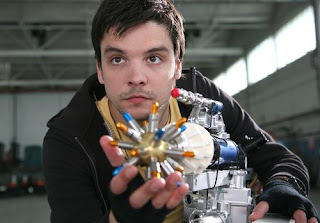 Episode 4 marks the first episode without Cutter (Douglas Henshall) *SOB*, and somewhat to my surprise I really liked it. This show (so far, anyway) has done a very good job handling the impact of characters' deaths on those who remain behind. It's acknowledged, it actually appears to matter, but they don't dwell on the point at the expense of moving forward with the story. This episode brought us two great examples in Connor (Andrew Lee Potts) and Jenny's (Lucy Brown) respective reactions to Cutter's death. Connor really appears to feel the weight of Cutter's last words ("it's on you now") and really wants to do good work. Now being Connor he is still going to screw up, but he's so dang cute one can't help pulling for him. LOL!

This ep had some excellent Connor/Abby (Hannah Spearritt) angst as well. It's a very solid indication that maybe, just maybe, their relationship will get somewhere...someday...for two seconds (I'm getting desperate, people!). Connor's reaction to the phone call from Abby's little brother (question - is it weird that he didn't know she had a little brother apparently?) about giving her a night out was priceless!!

Jenny's reaction is a bit wrenching. She's clearly living with "what might have been's" and deeply regrets never telling Cutter how she felt about him. The question is, can she handle working at a Cutter-less ARC? She's professional and driven as always but clearly it's a struggle. You know she's not quite herself when she can't keep Danny Quinn (Jason Flemyng) in line. Speaking of Danny - I really liked his character in this ep. Now that he's come to terms with the fact that something from an anomaly killed his brother, he's fully embraced the idea of working with the ARC - whether they like it or not. His rather laid-back, devil-may-care attitude is a refreshing change to throw into the established dynamic of the team. I think he's going to bring a breath of fresh air to the show (and annoy Lester, which will really make my day). ;-) How can you not love a guy who'll commandeer a helicopter after only two "unbelievably fantastic" flying lessons to fight off a dinosaur? Seriously!! Plus he's really hot when he's wearing black and riding a motorcycle. Just sayin'... ;-)

Lester (Ben Miller) is quickly becoming my favorite character of the season. His scenes never fail to crack me up. He's got the extreme "stiff upper lip" thing going on, so it's absolutely freaking hilarious watching him attempt to keep his frustrations under control. I LUV how Christine-the-witch's character (Belinda Stuart Wilson) brings out this sort of protective team player side of his personality. It's perfectly okay for him to throw around sarcastic remarks about the ARC crew, but if an outsider does it, well that's crossing THE LINE, people. LOL! I'm getting VERY curious about how Christine got her own anomaly set up and what exactly it is she's trying to accomplish. Speaking of Christine, I'm a little worried about Becker (Ben Mansfield) since he apparently one of her military team members was an instructor of his at Sandhurst. Note to Becker: Learn from Stephen's example and don't let yourself be emotionally blackmailed!! I'm getting too much of a kick out of the Connor-Becker team dynamic to want Becker gone anytime soon (the nerd versus the G.I. Joe type is too funny).

The G-Rex in this episode is a really prime example of how good the CGI-effects can be on this show. It works best when they're recreating a dinosaur instead of a futuristic creature IMO. I love seeing the G-Rex rampage around the airplane hangar and in relation to the 747...very nicely done IMO. I'm not going to even COMMENT on the stupid reporters because they just get on my last nerve (note to reporter dude, GET A FREAKING HAIRCUT!). I almost forgot, though, the Crocodile Hunter-type filmmaker the annoying reporter people brought to the anomaly - that guy had the animal show-host type nailed. Quite funny when prehistoric creatures are involved, ya know?

I guess that about covers my thoughts on this episode of the show. Of course it will take a few more episodes for the fallout of Cutter's absence to really be felt, but I have high hopes for the show's future. I'm still mulling over just a bit why Cutter's death hasn't had a greater impact on my view of Primeval...but that is subject to change at any moment, I suppose! The showrunners need to keep in mind, however, that Lester's character is my line in the sand...kill off Lester and I will be crushed, do you hear me, CRUSHED!! ;-) Hopefully I'll get my thoughts on episode 5 up this week...we'll see. LOL!