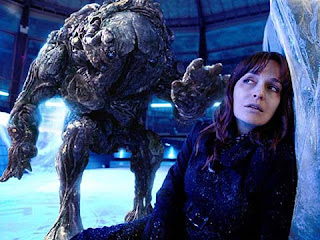 I really, really liked last Saturday's episode of Primeval. So the funky mutant fungus/mold men were among the less believable creatures in the show's history (the walrus-like thingys from series 2...can't remember which ep...are the absolute dumbest IMO!!)? The pace of the episode really worked for me, and it was packed top to bottom with tons of humor. Lester (Ben Miller) was on fire this episode. It starts right at the beginning with when he asks Becker (Ben Mansfield) to pistol-whip Danny (Jason Flemyng) for being a smart-aleck after they catch him breaking into the ARC all the way through to his long-suffering tolerance of Connor (Andrew Lee Potts) crashing at work. I couldn't believe it when he actually offered Connor the keys to his downtown flat - that moment was priceless! Could Lester have a heart?! ;-) His flash of generosity was only topped by his smug pleasure in one-upping Christine's (Belinda Stuart Wilson) attempts to maneuver one of her team members into the ARC as Cutter's replacement. Undercutting that power grab by appointing Danny was well played indeed.

Speaking of Danny, I thought this was his best episode yet. Flemyng really seemed to be relishing the campy adventure factor and just having a rollicking good time in front of the camera. Sure, Danny's a bit pushy, but I like his devil-may-care bravado and willingness to do, well, whatever it takes in order to get involved with the ARC team. He's a more active version of the Cutter we saw in the 1st three episodes of this series run. As to his qualifications - well, when it comes down to it, Dr. Page (Laila Rouass) is the only one remotely qualified academically speaking, and while she had a decent presence in this episode she has yet to be given enough screen time to really justify her role on the show IMO. Apparently all it takes to be a member of the ARC team is sheer grit and fearlessness, which Danny seems to have in spades. So Connor and Abby (Hannah Spearritt) are way too easily accepting of his involvment - I really didn't care. Maybe they sense a kindred spirit (i.e., we don't know what we're doing, just making this up as we go along, etc.).

This brings me to the Danny-Jenny (Lucy Brown) factor. Danny appears very willing to replace Cutter in Jenny's life, which is played rather sweetly in my view. However, Jenny's having NONE of that - which I kind of respect her for - and after barely surviving death by mold we get our second departure of the series. Shockingly enough, this one nearly brought a tear to my eye. I really liked the fact that Jenny left the ARC on her own terms. And while her last look around the office was the stuff all great departure cliches are made of, I ate up every second. All that was missing was having her walk out of the building to a flipping slow clap from the rest of the team. THAT would've been priceless!!

In summation, I am really quite pleased with this episode and with the direction of the third series thus far. The departures have been rather wrenching, but I like how they've brought some additional emotional depth to the team members' relationships.