Summer of Hitchcock: North by Northwest 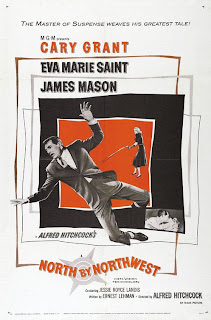 North by Northwest was the first film up for viewing as part of My Friend Amy's Summer of Hitchcock. I have no idea what I was thinking in yesterday's post on Dial M for Murder, when I stated that film was in my top five Hitchcock favorites - top ten, certainly, but not top five. That honor belongs to the likes of North by Northwest. It's one of those films that feels very nearly perfect to me - perfect cast, perfect direction, perfect script. Hitchcock caught lightning in a bottle back in 1959 with this jewel of a film that's held up remarkably well in the ensuing decades.

A bit about the story...

Cary Grant plays successful advertising executive Roger Thornhill in this his fourth and final Hitchcock film (following Suspicion, Notorious, and To Catch a Thief). He's plunged into the world of international espionage when foreign agents mistake him for government agent George Kaplan. Soon he's being kidnapped, framed for murder, chased, crop-dusted, and forced on the run, taking on a job he never sought out trying to outwit and outlast the bad guys.

Cary Grant is at his most debonair as the embattled Roger Thornhill. Grant just oozes class, even when his life is on the line. I love it when he first meets Eve Kendall (Eva Marie Saint), the undercover spy "forced" to seduce him when they meet on the train to Chicago. Their exchange about his "nice face" - like Grant's looks are anything but extraordinary, LOL - makes me smile every time I watch the scene. And yes, the seduction/kissing scene is unbelievably long - but you've got to give Hitchcock credit for the rather inventive ways he implies passion in his films rather than showing a lot of skin (which he couldn't have done due to the production code, anyway). A while back I read somewhere that Grace Kelly was one of Hitchcock's favorite leading ladies, and if she hadn't married Prince Rainer of Monaco in 1956 I have no doubt she would've been a strong contender, if not the 1st choice, to play the Eve Kendall role.

James Mason and Martin Landau both turn in excellent performances as the villains of the piece - Mason as the coldly calculating mastermind Philip Vandamm (sounds like a James Bond villian IMO) and Landau as his stooge in Leonard. I've never had a problem buying Mason as a creepy bad guy, but Landau's performance is always a bit jarring for me to view. I tend to view him as a kindly grandfather-type, like his turn in The Majestic. I also love Jessie Royce Landis's performance as Cary Grant's mother - though in real life she was too young to play Grant's mother, the two play off each other so well their scenes never fail to crack me up. And though he's only in one scene, I love the fact that Edward Platt as a small role as Grant's lawyer. There's a Get Smart episode, if memory serves, that echoes how Roger Thornhill gets sucked into the world of espionage. It's a tenuous connection, I know, but hey that's how my mind works - randomly! ;-)

For me North by Northwest is the perfect balance of suspense, action, humor, and romance. There's something incredibly scary about the idea of being lost in a life-threatening plot where your whole identity means absolutely nothing because everyone else is convinced you're someone you're not. Roger Thornhill's journey is an interesting one. As an advertising exec he's the king of fakes and sleight-of-hand, and he is sent on this journey quite unwillingly where he must shed self-absorption and put his life on the line for others. A far cry from the posh executive's life he's been used to leading!

Three other points - one, this movie sort of makes me wish train travel was still the norm, and two, I wish the Mt. Rushmore set piece didn't look so horribly fake. Oh well, can't have everything, can we? *sigh* Which leads me to point three - I think the crop-duster scene totally makes up for the cheesiness of Mt. Rushmore being all styro-foamy. ;-)

Currently North by Northwest is only available as part of the Alfred Hitchcock Signature Collection. However, if you can track down a DVD copy it's so worth adding to your collection IMO! One of the special features is a featurette hosted by Eva Marie Saint entitled "The Making of North by Northwest" which is a nice, informative look at the making of the film.
Posted by Unknown at 11:17 AM

I've seen this movie, but I hardly remember anything about it. =/ I should probably watch it again.