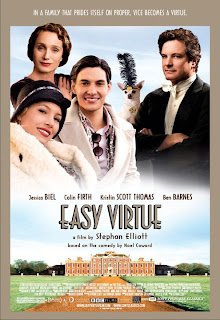 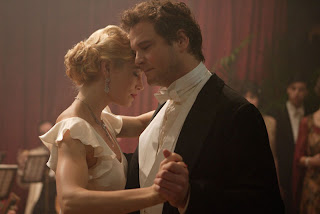 I'm going to have to track down a copy of Easy Virtue online or at the library to read it through - if the film is an accurate indication, Coward's got some very interesting and pointed things to say about hypocrisy, and as far as Larita's efforts go, a rather refreshing and respectful view of marriage (i.e., it takes work and no matter what the end outcome it's worth fighting for). Larita works her tail off to keep her husband, but he doesn't even meet her halfway by the end of the movie (can we say stupid & mind-bogglingly immature?!).

This movie was just the breath of fresh air I needed in my day. It delivered some great escapism and some unexpected moments of emotional depth. I'll definitely be adding it to my collection - it'll make a great double-feature with A Good Woman - and enjoying the soundtrack on repeat. Composer Marius de Vries's work on this film was just genius. His arrangements perfectly capture the effervescent feel of the time period, and the way he manages to incorporate contemporary songs like "Sexbomb" and "When the Going Gets Tough" and makes them work CONVINCINGLY in the score blows the mind. Looking forward to seeing this film "confection" again when it comes out on DVD (which will hopefully be soon!).
Posted by Unknown at 6:26 PM

Wow! I definitely want to see Colin Firth tango! :) I doubt this movie will ever make it to our theater, but hopefully I'll be able to catch it on DVD. Thanks for the heads up!

my sister who is a HUGE Ben Barnes fan is dying to see this just b/c of him. i on the other hand hate jessica biel so i will not.

@Jen - I think you'll like it. Have you seen A Good Woman?

@heidenkind - You're welcome. The tango alone MAKES the movie in my view. ;)

@Deborah - But you like Colin Firth, right? Couldn't the awesomeness of seeing him tango counteract your Jessica Biel hate? ;) I'm not a huge fan of hers, but I really like her in this & The Illusionist.

And all, I can't believe I forgot to mention the DOG in my review - seriously hilarious!!

Thanks! I just read parts of your review. I was afraid to read a spoiler but read enough to feel encouraged to watch it! It's on my list!!

@Charleybrown - Hope you get to see Easy Virtue soon, I so enjoyed it!