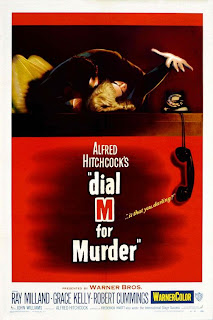 I’m two weeks late to joining My Friend Amy’s Summer of Hitchcock blogging extravaganza, but I am finally getting the chance to catch up. I’ve needed a good excuse to re-watch some of my favorite Hitchcock films. Last week’s move was Dial M for Murder, starring Grace Kelly, Ray Milland, and Robert Cummings. Dial M has always been one of my favorite Hitchcock films – off hand I’d say it’s solidly in my personal top five. It’s been several years since I’ve watched this movie, so while I remembered the basic storyline the presentation and details all felt very “fresh” to me.

First off, a bit about the story…

Margot (Grace Kelly) is married to washed-up former tennis player Tony Wendice (Ray Milland), and has been having an on-again, off-again affair with crime novelist Mark Halliday (Robert Cummings). She’s burned all of Mark’s letters but one, and that one was stolen several months back. There were blackmail threats, but the promised threat of revealing her indiscretion to her husband never materialized. Little does she realize that Tony is the blackmailer, and he’s been plotting the perfect murder to get his hands on her money. Let the game of cat-and-mouse begin…

This movie is based on a play by a Frederick Knott, and it shows – but that’s not necessarily a bad thing. Yes, the movie feels staged, but the performances are terrific across the board and action is so tightly plotted that the “stagey” aspect of the movie works really well. There’s an absorbing amount of drama going on at the Wendice apartment. I would love to see this story on stage! I also have to comment on how I love the use of color in this movie. Between the richness of the color and the smartly paced action, the movie feels reminiscent of the drawing room style mysteries Agatha Christie plotted so well.

I’d forgotten that this movie was originally filmed in 3-D. Generally speaking I’m not a fan of watching movies in 3-D, watching programs in 3-D always seem to give me a headache. However, since I was reminded of the 3-D technology used when filming the movie, I was very conscious of how each frame of film was presented. Hitchcock was very deliberate about filming in “layers,” so to speak. There are certain moments – especially when Tony’s stooge, Swann (Anthony Dawson) is trying to kill Margot and her hand just reaches out in desperation from the screen to grab something, anything in an attempt to defend herself – and finds a handy pair of scissors. (Death by scissors is surprisingly neat…just sayin’…) Thankfully this movie is filmed so well that you aren’t distracted by the 3-D formatting, or lack thereof when watching it in “flatscreen.”

Since there are really only three players in this drama (four if you count Inspector Hubbard played by John Williams), the movie wouldn’t work nearly as well as it does if any one of their performances faltered. In my opinion Grace Kelly did some of her best work in the three Hitchcock films she appeared in, Dial M being the first (followed by Rear Window and To Catch a Thief). Her opening scene sets the stage – wearing white she’s a dutiful, affectionate wife greeting her husband at breakfast, and moments later she’s a passionate cheater looking drop-dead gorgeous in a flaming red gown. She’s a great balance of fire and surprising innocence in this movie - an arresting screen presence that would only grow more powerful in her next two pictures with Hitchcock. On to the husband – it always gives me a start seeing Ray Milland playing this despicable, smarmy role. My first image of Milland was formed by watching his performance in The Major and the Minor, and because that movie is such an old favorite, and he plays such a sweetheart in it, seeing him play a coldly calculating blackmailer feels like a sort of betrayal. LOL! When it comes down to it, I think my strong reaction to this performance is a mark of the quality of Milland’s acting in this film. Of the three leads I have the hardest time taking Robert Cummings seriously – he’s so boyish when compared to Milland that I don’t quite buy him as the third party in an extramarital affair. However, he gains some good guy points when he starts to figure out Tony’s plot. And since Tony was obviously going to kill Margot anyway for her money, Mark proves to be a much better, more sensitive and supportive romantic interest for Margot who goes from being an adulteress to a wrong wife (nice done to satisfy the cultural mores of 1954 BTW). I also have to comment on how much I love John Williams’ performance as the Inspector. He was such a classy actor, and here he manages to imbue the Inspector with just the right balance of smarts, saavy intuition, and humor.

I’m so glad I got a chance to revisit this classic. You can purchase the DVD of Dial M for Murder here. It comes with two short, but interesting featurettes: “Hitchcock and Dial M” and “3D: A Brief History.”
Posted by Unknown at 9:34 PM