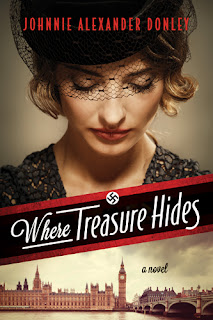 With Europe on the brink of war, artist Alison Schuyler never expected to have her life changed while waiting for her train at Waterloo Station. Returning to her home in the Netherlands following an exploratory trip to Wales -- where, at the behest of her grandfather she gathered intelligence on how to protect their beloved nation's national art treasures from the coming conflict -- she is arrested by the sight of a British officer defending a young Jewish child from the recently-arrived Kindertransport. Lieutenant Ian Devlin is equally captivated by the beautiful artist, and puzzled by her determination to deny the obvious attraction between them. Though she spends just a few unforgettable hours in Ian's company, Alison is sure the family fate -- and the coming war -- means their fledgling relationship is destined to fail. When she returns to the Rotterdam and her family's renowned gallery, Alison throws herself into her work, determined to forget Ian's kind eyes and their ill-fated attraction, even going so far as to entertain the attentions of a persistent German count who seems to value winning her affections as much as the art treasures she so cherishes. But all is not as it seems with the count, and when war comes Alison must decide where her true treasure lies -- in her own efforts, in protecting the art that is her life, or in taking a leap of faith on a love she can't forget and a God who knows her heart's deepest desire?

It's no secret that I LOVE World War II-era fiction, so when Donley's debut was released earlier this year I fell in love with the gorgeous cover and knew I had to read it. The opening is promising -- I loved the romance of Alison and Ian's "meet cute" at the train station. It's reminiscent of two of my favorite classic wartime dramas -- Waterloo Bridge, a World War I-set drama featuring a gorgeously-told, ill-fated romance between Robert Taylor and Vivien Leigh, and the poignant wartime romance The Clock featuring Judy Garland and Robert Walker. There is a fairy tale-like quality to the novel's opening pages, from Ian's gallant defense of the refugee boy, even to Alison's insistence that love is out of reach due to a family "curse."  Donley succeeds in imbuing the opening of her novel with an old Hollywood atmosphere and charm, with the promise of a romance laced with the bittersweet poignancy and uncertainty of wartime.

I applaud Donley for focusing her storyline on elements of World War II history that -- in my experience, at any rate -- have not received a great deal of attention in similarly-themed fiction. I loved the Rotterdam setting, and the passion Alison and her grandfather have to see their national treasures protected from potential Nazi looters. It reminded me a bit of the Masterpiece Contemporary film Framed, which -- though set in the present day -- took its cues from the historical evacuation of the National Gallery's treasures from London to Wales during the war, and similarly touches on the power of art to inspire and foster a sense of national identity and pride.

That said, where the novel begins to falter is in pacing and characterization issues that surface as the story progresses. First and foremost, the whole idea of a Schuyler family curse simply doesn't work. Frankly, it feels incredibly immature for Alison to continue to rebuff Ian in order to "save" him -- I'd have much preferred her to simply acknowledge that she has trust issues, scarred by her father's abandonment (instead of chalking up his behavior as a result of the "curse" playing out in his own life). SPOILERS: And the final fifth of the novel, where Alison leaves the safety of London on a stranger's word, and then develops a tolerance for her captor indicative of the Stockholm Syndrome is, quite frankly, beyond the scope of believability or sense. There is good drama and then there is just idiotic behavior, and unfortunately for Alison her actions in the novel's final act fall firmly into the latter camp. Pacing-wise, the novel possesses an ambitious scope by covering the entire war period -- I think this book would've been stronger and her characters better served if she'd had the chance to flesh out her storyline over two volumes instead of one, making time jumps less jarring and Alison's character more grounded and mature (especially given her complete disregard for her physical health when she leaves England).

Despite my issues with Alison and the story's pacing, I think Donley has the potential to be an author to watch. She has knack for imbuing her writing with period detail and a welcome willingness to explore lesser-examined aspects of wartime history. The beginning of Alison and Ian's romance has the charm of a fairy tale, and I loved the latter's sense of honor and duty, particularly as it plays out during his flight to freedom from the Germans. There is a lot of potential here, and should Donley release a sequel I'll definitely check it out.

Artist Alison Schuyler spends her time working in her family’s renowned art gallery, determined to avoid the curse that has followed the Schuyler clan from the Netherlands to America and back again. She’s certain that true love will only lead to tragedy—that is, until a chance meeting at Waterloo station brings Ian Devlin into her life. Drawn to the bold and compassionate British Army captain, Alison begins to question her fear of love as World War II breaks out, separating the two and drawing each into their own battles. While Ian fights for freedom on the battlefield, Alison works with the Dutch Underground to find a safe haven for Jewish children and priceless pieces of art alike. But safety is a luxury war does not allow. As time, war, and human will struggle to keep them apart, will Alison and Ian have the faith to fight for their love, or is it their fate to be separated forever?
Posted by Unknown at 12:45 PM

I love the cover! I hadn't heard of this book before your review, but I think I'll definitely have to check it out. I love your comparisons, especially to The Clock. :) I too really enjoy World War II era novels. Have you by any chance read Villa Triste by Lucretia Grindle? I think you would like it.

@Jennifer - Isn't the cover gorgeous? The Tyndale team did a terrific job. Let me know what you think -- and I haven't read Villa Triste, but thanks for the rec! :)