Review: What I Saw and How I Lied by Judy Blundell 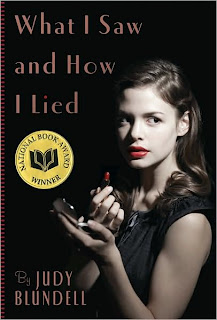 What I Saw and How I Lied
By: Judy Blundell
Publisher: Scholastic
ASIN: B0035SAHKM

It's 1947, and with the return of servicemen from overseas, all of America -- including Evie Spooner and her parents -- are determined to embrace the promise of a postwar boom, to realize anew the promise of the American dream of success and plenty, uninhibited by wartime rationing and shortages. At fifteen, Evie is caught between the comfort of childish things, the known, and the irresistible pull of adulthood -- the mystery of filling out a stylish dress, red lipstick, and nylons. It's the mystery of being desired -- of finding within herself when she looks in the mirror some version of her glamorous mother Bev, something more than the Plain Jane she sees, the one her parents refuse to release into adulthood.

The Spooner family has everything to gain thanks stepfather Joe has plans to expand his string of electronics stores, but beneath the veneer of success and respectability lurks the specter of wartime deprivation and secrets. Following a mysterious phone call, Joe packs the family in the car on a whim and they head to Palm Beach, Florida -- a promised land of milk and honey. But the glamour of Palm Beach is a patchwork fraud, as the city is closed for the season, and in this land of thinly-veiled artifice Evie begins to see the first cracks in her family's happy facade. With ex-GI Peter Coleridge, an wartime acquaintance of Joe's, she feels the first stirrings of love -- but her obsession with Peter blinds her to the havoc he wreaks in parents' relationship. When a deadly hurricane bears down on the Florida coast, ripping away Evie's security, she's left with to pick up the shambles of her adolescent dreams -- and the price of a maturity hard-won and come far too soon.

What I Saw and How I Lied is a deliciously atmospheric coming-of-age story amid the possibilities and optimism that exploded within the postwar decade. Blundell has succeeded in penning a novel that reads like a film noir classic come to life on the page. Evie's story possesses the shadowed, moral ambiguity found within classic noir films like of The Big Sleep, the romantic obsession of love gone wrong in Laura, and the collision of untamed nature and man's basest instincts in Key Largo. With the finesse of a finely-edited film and the wry sensibilities of a noir master like Raymond Chandler, Blundell has crafted a remarkably atmospheric novel, steeped in not only the history of the time period, but its entertainment sensibilities as well, wrapped up with a timeless understanding of the heartache attendant with growing up hard and fast.

I absolutely loved Evie's unvarnished honesty. Her desire to experience the trappings of adulthood without (as yet) a measurable understanding of the cost is heartbreakingly relatable. There is a timeless quality in her desire to find love, her idolization of her parents, and I suspect her drive to keep peace between them -- to ignore any fissure in their relationship -- will ring all too true for many who read her tale. Quite frankly, I found her story highly disturbing in many respects -- Evie's utter naivete, the increasingly, glaringly apparent fact that those adults she should be able to rely upon for advice and protection are falling woefully short  alternately broke my heart and left me deeply chilled, wondering just how many unknown Evies are out there, facing their own impossible choices all in the name of survival.

With What I Saw and How I Lied, Blundell has succeeded in crafting a pitch-perfect, beautifully realized historical imbued with a timeless, chilling intensity. I loved how she sprinkled the history of the war and its impact on those who fought and those who survived throughout the narrative, from war profiteering to the tragic blight of prejudice and the unfathomable horror faced by the realization of what that prejudice wrought in the Nazi camps. Evie's coming-of-age is delicately fashioned on the page, absolutely heartrending in how Evie's adolescent daydreams collide with the stark adult reality of her parents' secrets. A twisty, thought-provoking period piece, timeless in its emotional intensity and honesty, What I Saw and How I Lied is a gorgeously-rendered coming-of-age story told with the grace and shadows of the finest noir tale. A chilling, unforgettable story sketched with a filmic sensibility that brings Evie's postwar world to vibrant life on the page -- very well done, very well-told.

This National Book Award winner set during the aftermath of WWII is now available in paperback!

When Evie's father returned home from World War II, the family fell back into its normal life pretty quickly. But Joe Spooner brought more back with him than just good war stories. When movie-star handsome Peter Coleridge, a young ex-GI who served in Joe's company in postwar Austria, shows up, Evie is suddenly caught in a complicated web of lies that she only slowly recognizes. She finds herself falling for Peter, ignoring the secrets that surround him . . . until a tragedy occurs that shatters her family and breaks her life in two.
Posted by Unknown at 5:41 PM

I'm a few days late with this comment, but I just have to say, I LOVE that title. :) Sounds like a great one!

I read this a few years ago and remember not being really into it. But then reading your review, it has me wanting to read it again. I know I did like the setting. Very well thought review!

@Melissa - Thanks for stopping by! Isn't it a fabulous title? SO perfect! :)

@Mrs. Pedersen - Hope you enjoy it!

@kay - Thank you! This is a book that I'm a little torn about...parts of it I loved, others were more troubling...but it was a wonderfully thought-provoking! :)